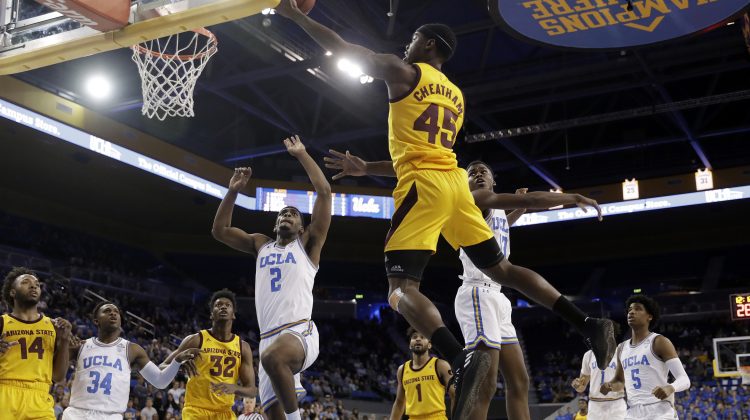 The Pac-12 announced its All-Conference honors on Monday morning. Along with selections from both Arizona and ASU, a Mesa native received accolades.

Cheatham was a first-team, and All-Defensive team selection. It’s not surprising given his athletic versatility that helped the Sun Devils in a variety of ways. The Phoenix native averaged a double-double in the regular season, accumulating 11.6 points per game and 10.4 rebounds.
Cheatham: “It’s a blessing. I put in a lot of work for it. We kind of sweep some of those types of accomplishments under the rug because we train ourselves to be competitive and we pretty much want to look past it, or we expect more of ourselves. In this instance, I am really appreciative of it and it just kind of shows the impact I have had on this team and the blessings that I have been able to accomplish.”

Martin was a second-team selection. His 27 points on Saturday against in-state rival Arizona helped will his team to a victory. Martin average over 13 points per contest, and he led the team in assists by a wide margin with 146.
Martin on making second team and missing first team: “It’s kind of been the story of my life. I have always been overlooked. That’s kind of the reason I am acting the way I am right now. I know other people are a little bit more frustrated than me, but it’s okay. My game shows for itself and as long as I am a point guard, we are judged for out wins and our record. As long as my team is winning, I don’t care.”

Dort made second team All-Conference, and he made the All-Freshman and All-Defensive teams. The recognitions show the type of skill that NBA Scouts have been eyeing over the course of his first collegiate season.
“I don’t think I was expecting that. I was just trying to come here and have an impact and then when I saw that this morning, I was very grateful.”
Dort led ASU in scoring with just over 16 points per game and his defensive skill was proven with his team-leading 42 steals.

Hurley: “It’s been a great day with a lot of the awards coming out. Congrats to Zylan, he’s had a tremendous year to get first team and then Lu and Remy with All Pac-12 as well. And Remy probably should have been in that first-tier with Zylan. Then the two guys on the All-Defensive team, I take a lot of pride in that. I don’t think we were ever in contention for those types of awards in the past. Those are great things and the guys are very focused. I think they know what it’s about and we are playing with confidence right now. There’s a lot of hope on what we can accomplish this week and beyond.”

Arizona
The Wildcats had one Pac-12 All-Freshman Honorable Mention. Guard Brandon Williams was second on the team in scoring with 11.8 points per game and he showed a lot of promise for a young player in the Pac-12. It was a down year in conference play for Arizona, but Williams was a positive in Tucson.

Local Talent
Although he didn’t play his college basketball at ASU or Arizona, there was one player who hails from the Phoenix area in the Pac-12 All-Conference Selections. Utah freshman forward Timmy Allen went to Red Mountain High School in Mesa. He was named to the All-Freshman team after averaging 12.2 points while playing nearly 30 minutes per game.

A former four-star recruit as rated by ESPN.com and Scout.com, Allen scored almost 20 points a night as a senior at Red Mountain.