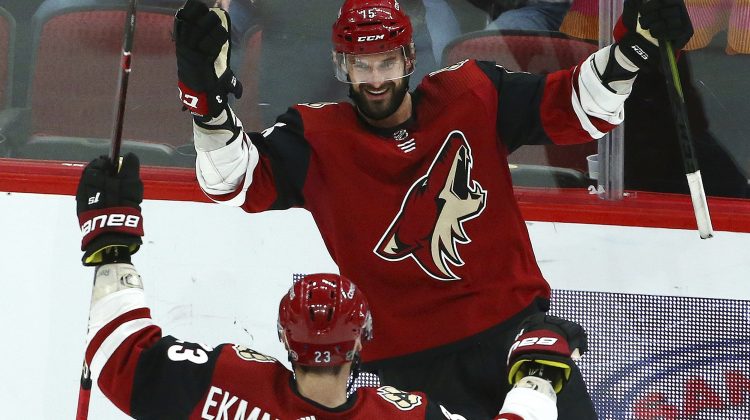 In case you haven’t heard, the Arizona Coyotes are one game out of a playoff spot. Yes, I said that correctly. The Coyotes are just one point out of a spot for the postseason.

They are tied with the Dallas Stars for a point total of 67. The Colorado Avalanche and Minnesota Wild are tied at 68 points, narrowly ahead of the pack. To make things more interesting, the Coyotes trail the Las Vegas Golden Knights by just six points for one of the top-three spots in the Pacific Division. The top three teams out of each division make the playoffs, along with two wild card teams from each conference.

The Desert Dogs upended the Vancouver Canucks 5-2 on Thursday night at Gila River Arena. Brad Richardson had four goals and multiple players had big nights. Here are some takeaways from Andrew Bell as the Coyotes continue to hunt down either a wild card, or top-three spot in the Pacific Division.

1. 13, 14, 15. Mark the numbers. The numbers 13, 14, and 15 were more than noticeable on Thursday. Richardson had four goals and his linemates accounted for three points a piece. Between Richardson, Vinnie Hinostroza, and Richard Panik, the line registered 10 points. Richardson scored the first three goals of the game. He was a force to be reckoned with and he also wreaked some of the benefits of going up against Vancouver rookie goaltender Thatcher Demko, who started in just his second game all season. The four-goal outburst was the first time in 22 years that a Coyote has scored four goals. The last to do it? Keith Tkachuk. Not bad company. Ultimately, the line was relentless on Thursday. Richardson’s only other hat trick in his career came against the Avalanche. Richardson, a former Canuck and Avalanche player, has wreaked havoc playing against his former teams. Richardson joked, saying “The Coyotes better not trade me.” Rest assured after Thursday’s game, I am sure the Coyotes want him in the Valley for quite some time. But it wasn’t just Richardson. His linemates helped pave the way in a strong performance from all three players.

“It was just one of those nights where I felt like we had the puck all the time and our line was just kind of clicking,” Richardson said. “They made some great plays to me. I’d say the first goal was kind of a good shot, and the rest were kind of tap-ins for me, so it was nice.”

2. Home sweet home. Since returning from their last road trip, the Coyotes are 3-0 in the midst of a seven-game homestand. The Coyotes have won their last five games, but as head coach Rick Tocchet mentioned, the goal now is not to get complacent. The struggling Detroit Red Wings and Anaheim Ducks come to Glendale next. Although both franchises have had down years, he knows the opponents can’t be overlooked. The idea of a team having a rough season, but playing well at the end of the year is all too familiar to Tocchet. Just flashback to last season.

“That was us last year,” Tocchet said. “The last 30 games I think we had the sixth best record. So if there is any lesson to learn, it’s that teams are dangerous. We were dangerous last year and we were out of it. Learning from experience, we were that team.”

3. Cool as Kuemper. Believe it or not, Thursday wasn’t a walk in the park for the Coyotes. They were outshot 39-24, and were outplayed at various points throughout the game. However, Darcy Kuemper stood tall when he needed to. He had a variety of timely stops, including a sprawling blocker save on an odd man rush when the game was still close in the second period. In 2019, Kuemper is 14-3-3. He was a big part of the win.
4. Concern for Stepan. Late in the third period while the Coyotes were up by three goals, Derek Stepan got his left leg pinned against the boards during a battle for the puck. He was in immediate discomfort and had to be helped off the ice with the help of a trainer and Oliver Ekman-Larsson. There was no status on his condition after the game. His diagnosis was still being determined. In a season where the team has been plagued with injuries, including losing their starting goaltender and a few top players, the hope for the Coyotes is that the play looked worse than it actually was.

“Anytime you see anyone go down, it’s a tough feeling,” Hinostroza said. “Hearing him in pain on the ice, he is one of our key players and that is really tough to swallow…You can’t make up for a guy like that and what he means to this locker room and this team, so I haven’t seen him yet but I am hoping he has a fast recovery and it’s nothing too bad.”

Well, those are the takeaways from Thursday’s win over the Canucks. It’s the best time of the year in the National Hockey League as the push to the Stanley Cup Playoffs continues, and the Coyotes have found themselves right in the thick of it all.

“This is the time when you win three or four at home. You can’t let your foot off the gas pedal,” Tocchet said. “…The guys are really working hard and I got to give them a lot of credit for putting themselves in this position.”