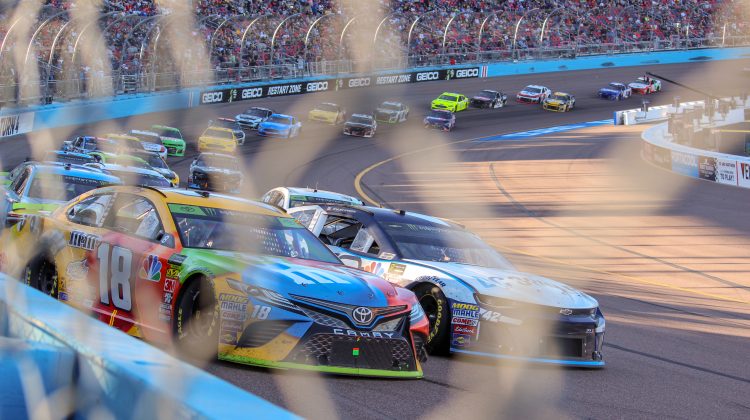 The campers have flocked to the one-mile oval in the Estrella Mountains to create the small city of ZOOMTOWN USA in Avondale, AZ, twice a year for NASCAR racing.

The Monster Energy NASCAR Cup Series and NASCAR Xfinity Series arrive for their fourth race of the 2019 season at the modernized ISM Raceway. This is the second race following $178 million in renovations. The infield and grandstands are completely remodeled, along with moving the start/finish line to create more excitement on the track.

Currently, two drivers from the state of Arizona are entered in the Ticket Guardian 500. Hendrick Motorsports youngster, Alex Bowman, qualified second place in the 2019 Daytona 500 and sits 12th in the points standings driving the No. 88, formerly driven by Dale Earnhardt Jr. You can hear about his thoughts on ISM Raceway and the 2019 season on his edition of ‘The Inside Lane.’ Bowman also qualified on the pole back in 2016 at ISM Raceway.

Michael McDowell runs the Front Row Motorsports No. 34 and put on a show in the Daytona 500. The Glendale native caused controversy in the Great American Race after finish fifth, the second highest finishing Ford only behind defending champ, Joey Logano, beating out other higher-funded teams such as Penske Racing and Roush-Fenway Racing. McDowell has led laps at ISM Raceway and sits 26th in points. Hear his thoughts on his home track from his edition of “The Inside Lane.’

Peace out Vegas ✌🏼 Onto the home track pic.twitter.com/LTmAR7xwnh

The defending March Ticket Guardian 500 winner, Kevin Harvick, holds the most all-time wins at the Avondale track. His nine wins are more than twice that of second place, Jimmie Johnson.

November’s Can-Am 500 winner, Kyle Busch, holds the records of the youngest winner and pole sitter at ISM Raceway coming in 2005 and 2006.

The first Cup race at the track came in 1988, won by Wisconsin native, Alan Kulwicki, who hails from the same state as new track president, Julie Giese.

Don’t be surprised if someone works their way through the field to win the race. Half of the Cup races at ISM Raceway have been won by drivers who started outside the top ten.

A New Story Every Week

The first three races in the NASCAR season has seen three different winners. Joe Gibbs Racing found victory lane in the prestigious Daytona 500 through Denny Hamlin. Denny was victorious in the No. 11, a number synonymous with Joe Gibbs’ late son J.D. who passed away in the off-season.

Three drivers have clinched playoff spots with a win, and if we witness a new victor at ISM Raceway, they will lock themselves into NASCAR’s elimination format playoffs as well.

We’re searching for a win in the desert! 🏆 Who’s gonna park their hot rod in victory lane this weekend at @ISMRaceway? 🤔 #NASCARGoesWest pic.twitter.com/eAcFIuiPNV

Being the most interactive tracks on the circuit comes with several perks for fans attending the race weekend. The modernized ‘INfield’ gives fans an up close and personal look at a race team’s weekend.

An interactive garage allows fans to be mere feet away from the race cars and the drivers themselves, new themed food and beverage options, Q&A sessions with drivers, and an interactive victory lane where fans can celebrate with the winning driver.

The new start/finish line has created new excitement on restarts for any series that races at the track. With the finish line in ISM Raceway’s famous dogleg, drivers will be shifting gears in the middle of the turns three and four, also giving them the opportunity to flock four to five-wide into the first corner.

You can check out your own personal tour of the ISM Raceway INfield guided by Devon Henry and go more in depth with all the changes that came with $178 million flooded into ZOOMTOWN USA.

He’s seen our old Gatorade Victory Lane several times. He’s ready to experience the new one with you: https://t.co/OJO0MnTDil pic.twitter.com/LR5MXPCDDR

Racing begins on Friday for practices for both series and Cup qualifying. The Xfinity Series races begin at 2:00 p.m. Saturday with the Cup Series race Sunday at 12:30 p.m. Arizona Time.

Only Kyle Busch, Ross Chastain, and BJ McLeod are scheduled to race double duty in both the Cup and Xfinity Series races this weekend.