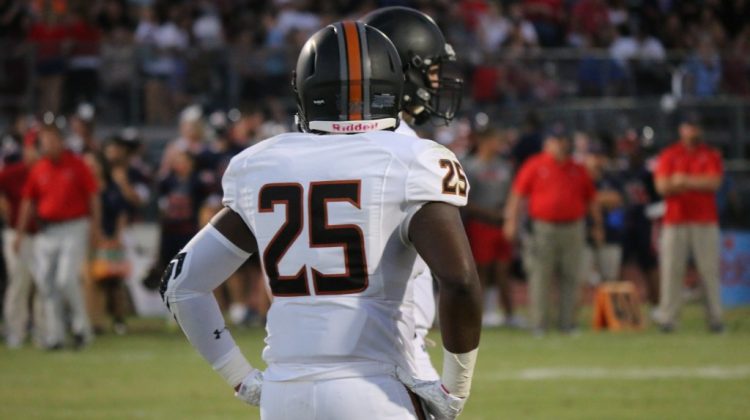 Note from Sports360AZ CEO Brad Cesmat:Wednesday was College Football National Letter of Intent Day. We asked Desert Edge linebacker/running back Milton Rodgers, who’s signed with Independence Community College (KS), to share his high school experiences on and off the field, as well as why ICC was the best fit for him to continue his academic and athletic career.

My football journey began when I was 10 years old. I’ve always wanted to play football but my mom thought it was dangerous. It wasn’t until west Valley football coach Nick Nikkas pulled me aside and asked if I wanted to play. My eyes lit up and I couldn’t say “yes” fast enough. I showed him where I lived and he talked to my mom and convinced her to let me play and I was scheduled to practice the following Monday.

It was a bit tough in the beginning but throughout time I became the captain and it was the first time I received a leadership role. I began to encourage my teammates to get better in and out of games and practice. At this time I met my best friend Kody Ball and we made a decision to go to Desert Edge High School. That was the best decision I ever made.

Freshman year was amazing. I was on the freshman football team and later was moved up to varsity as the scout running back. I scored my first career varsity touchdown on against Betty Fairfax. I was also honored to play on the state championship team. At that moment I knew I’d play a impactful role at this school.

All summer I spent numerous hours training and put up extraordinary numbers in the weight room. My sophomore year I was defensive captain, led the team in tackles and also was received first team all-region linebacker. I wouldn’t have been able to achieve this without my mentor Vince Del Ponte. He taught me how valuable it was to study your opponent.

As junior year was rolling around I was bewildered with the news that we lost our beloved head coach, Rich Wellbrock. He also taught me a valuable lesson which was to fear no man. I had to convince the other players on my team to stick together and trust the process. As time went by we finally got the word that our new coach was Jose Lucero. I trusted him because he was a previous coach at Desert Edge. As the captain of the team I quickly became his right hand man. Come football season I led the team in tackles and received my second first-team all-region linebacker award. At the moment I had zero offers, it was very frustrating but drove me to be an even better player. That only meant back to the drawing board and more training.

I will play division 1 ball , I will take care of my family , I will be a Man #speakingoutloud

Senior year approached and I encouraged my team to get better and work harder than ever. It was our first game day and I rushed for nearly 200 yards on 28 carries. I gave my linemen all the praise. Even though they were young I would consistently tell them all I needed was a push and they did just that. The second game of the season my touches were limited with eight carries and 80 yards. During this game I received my season-ending injury. As a football player it shattered my heart but as a man it brought me closer to God.

In a certain aspect I needed that because I now put God first. I strongly believe I have one of the strongest testimonials because of my injury. As time goes by I shifted to a coaching/captain role for my team as we made our run to state. One particular game I remember the most was against Millennium. As soon as I hit the field on crutches I was welcomed with applause and tears as I made my way across the field. After that moment I instantly fell in love with my home town.

Every night I would pray to God and ask him to bless me with the opportunity to play at the next level and he did just that. I was swarmed with offers starting with a Division III school in California, Whittier College and two NAIA schools located in Arizona: Ottawa University and Arizona Christian University. It was followed by Dream U Independence Community College. This was nothing but the works of the man above because I only played two games my senior year and had little-to-no film.

Since then I’ve been pushing myself to the limit to get back to where I need to be I’ve worshipped God just as hard as I’ve been training. Without the help of my family, coaches, and the man above I wouldn’t be the man I am today. I am letting the lord decide where I will play because he will make sure I go all the way.

I would like to say thank you to everyone who supported me and had my back through my journey. This is just the beginning of my courageous testimony. The way I will be choosing my school is putting my top three schools into an offering basket three different times, which will be nine slips of paper. I will have my pastor, co-pastor and my dad pray off the offering basket and I will draw to see what school I will be attending. This will assure that this is where God will want me to go.

(Editor’s note: Milton tweeted this out Wednesday afternoon regarding his future school).

I want to first start off by saying thank you lord for opening all these doors for me to jump out of and show Everyone my NetWorth if it wasn’t for the man above wear would WE be ?!🙏🏿 thank you @INDYHEADCOACH1 for believing me and giving me A scholarship to play at #DreamU 🔵🔶 pic.twitter.com/xbEjVZWNk7