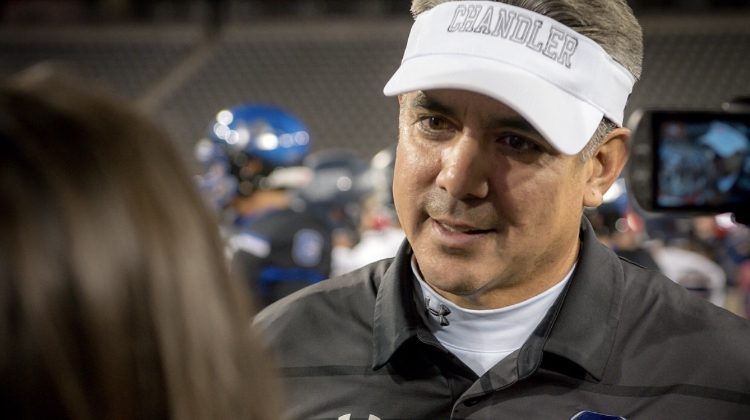 It’s been 25 years since Charles Barkley’s splashy Nike commercial ignited a seemingly nationwide debate regarding multi-million dollar athletes and their role among influential youths in America.

For Shaun Aguano, there simply is no debate. He was and will continue to be a role model to the Chandler High School football program and community in every way, shape and form possible.

I first met Coach Aguano in 2013. Although I had always followed it from afar, covering high school football in the Valley was still relatively new to me as I transitioned to my new role with our company. Through co-workers and people within the football community, I had heard good things about the Hawaiian coach with the warm, welcoming smile.

I’ll never forget the way he greeted me that late-summer afternoon. He was genuine and welcoming. Coach Aguano was more interested in learning about me and not so much about himself or his team-which was on the brink of statewide dominance at the highest level for the next half decade.

Like all great coaches, he never made the program bigger than himself. “Ohana” — meaning family, became the Wolves’ mantra, bonding brothers not only on the field but in life, as well.

A VERY big shoutout to the man who has taught me very many valuable life lessons that I will cherish for the rest of my life. Thank you for being such an amazing coach and second father to me!! Wish you the absolute best in your future of coaching. #OHANA @aguanos pic.twitter.com/opkDAReq6A

His approach entering each season was both calculated, as well as selfless.

“I do an evaluation of me,” Aguano told me back in November when asked to describe his annual January CHS football blueprint. “I ask our coaches to evaluate me. I just want to me make sure that we are progressing as a program to the highest level.”

“Go home, talk with your family again. If they are not in full support of you coaching here, I cannot accept you joining my staff. We are all ohana”. @aguanos concluding my interview 8yrs ago. Shaun, thank you for always holding me to a higher standard. #Ohana #FearlessFamily

Chandler football under Aguano was without question program at the highest level. Three-straight 6A state championships and four in the last five years. A career 88-19 record, including winning 63 0f his last 71 in the state’s most difficult section.

The wins were nice but Aguano’s impact stretched far beyond the scoreboard.

It’s not uncommon to see former Wolves’ standouts like Bryce Perkins, Chase Lucas, N’Keal Harry and countless others standing on the sidelines for games.

There were certainly instances of tough love under Aguano but each example was set with a purpose.

Aguano suspended Harry before Chandler’s 2015 state semi-final matchup against Desert Ridge because the star wide receiver (and at that time, defensive end) failed to meet the team’s standards academically. CHS lost 24-21 but to Aguano, the lesson learned for Harry, was bigger than the game.

Perkins once described his coach as “strict” but credits Aguano’s disciplined style for helping him adapt to the higher demands on and off the field at ASU and now Virginia.

Couldn’t be happier for my guy Shaun Aguano!

Sure, Aguano ran into a little good luck along the way like when the then-skinny sophomore Lucas replaced an ill Zech Culbreath at running back in 2013 and rushed for nearly 900 yards and 11 touchdowns.

@aguanos created a legacy. A legacy that will live on in the lives of so many young men. A coach who put others before himself, strove to create men to change the world on and off the field. Past, present, & future wolves thank you for everything you’ve done. #OhanaForever pic.twitter.com/TiDoSmmyIL

He always wanted to coach his son Nainoa at Chandler but injuries forced him to quit. Instead of studying playbooks Nainoa began studying scripts, taking up acting at CHS. Dad instantly became not only his biggest fan but biggest supporter of his new passion.

Last week Aguano’s next football chapter took him about 12 miles or so up the 101 after being named Herm Edwards’ new running backs coach at ASU. The move is logical for both parties.

Of course, Aguano left his own personal touch behind at Chandler reportedly going to each and every teacher on campus to personally thank them for their support during his near two-decade coaching career at the school.