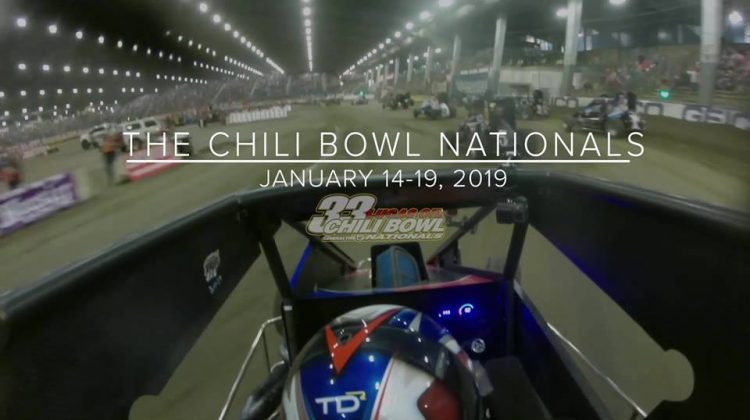 One of the biggest races in the world takes place over the span of a week starting on Jan. 14. Over 350 of the greatest racers hop into midget race cars to tackle a quarter-mile dirt oval, annually built in the Spirit Expo Center in Tulsa, OK.

Drivers from NASCAR, IndyCar, World of Outlaws, off-road, drag-strip, and more dirt and pavement racing head to the Chili Bowl Nationals to fight to be one of the 24 drivers to make the main race out of over 350 entries.

Here’s the gist. Every day brings a full show of heat races, semi’s, and an A-Feature of different drivers with only four drivers of over 70 drivers making Saturday’s big race per night. That happens Monday through Friday with everyone eyeing a spot in Saturday’s A-Main race.

It’s a 55-lap shootout for one of the most prestigious trophies in motorsports, the Golden Driller. Imagine 350 of the world best basketball or football players battling one-on-one over the span of a week, and only one can be victorious.

The 2014 Western World Champion will be driving for McKinney-Taylor-Yeley in the 33rd edition of the Chili Bowl Nationals. Rossi is a long-time sprint car driver out of Peoria, Arizona. While he didn’t race in the 2018 Chili Bowl and was scored with a DNS on Saturday’s following a crash in his qualifying day feature in 2017. Rossi has his qualifying day scheduled for Tuesday.

The name Yeley is written all over Chili Bowl History. Son of Arizona legend, ‘Cactus’ Jack Yeley, longtime NASCAR racer J.J. Yeley has done all but win the Chili Bowl Nationals. The USAC Triple Crown Champion now resides in North Carolina focusing on his NASCAR efforts but is originally from Phoenix. Yeley has made eight Saturday A-Mains since a 9th place finish in 1999 but the feature has eluded him since a 17th place performance in 2015. Yeley nearly won it all in 2007, finishing runner-up to former NASCAR teammate, Tony Stewart, but still credits three top fives in the Saturday A-Feature. He’ll run the McKinney-Taylor-Yeley 2J and is coming off a B Feature Saturday Night in 2018. Yeley hits the track to qualify on Wednesday.

The legendary Shuman family has plenty of blood in the Chili Bowl once again. Related to Casey, Ron, and Billy, Queen Creek’s Rick Shuman has raced modified midgets and sprint cars locally in Arizona. His 2018 Chili Bowl ended in the F Feature, one of his best in his Chili Bowl career. Shuman hits the track on Thursday for his qualifying day.

One of two Arizonans running for Boss Factory Racing, Glendale’s Dennis Gile may sound familiar to hardcore football fans. Gile made the New England Patriots Training Camp squad in 2003 and played in the Canadian Football League as well as the Arena Football League. Now in charge of the local “Dennis Gile Quarterback Academy,” the sprint car driver eyes his first Chili Bowl start when his qualifying day is underway on Wednesday.

Dennis Gile
2019 Chili Bowl Nationals
Its owned by Kenny Brown
The midget is a Boss Chassis powered by Toyota pic.twitter.com/B6x7mAEud5

There aren’t many drivers who have been racing around the valley as long as Shon Deskins has. Primarily a sprint car driver, Deskins has added midget racing to his schedule more often over the past few years and has spread his wings out racing in New Mexico and Southern California as well as Arizona. He even locked down a New Mexico sprint car championship with the NMMRA in 2017. Deskins has two Preliminary Night Heat Race wins since 2013 and finished last year in the E Feature. Deskins will be in his own car and is the lone Arizonan qualifying on Monday.

Stevie Sussex, driving for Boss Factory Racing, is on the list of prelim heat race winners for the Chili Bowl taking a win back in 2013. Sussex has been racing around the nation, recently landing a multitude of sprint car rides across the nation in USAC, ASCS, and more. The Laveen driver is coming off an E Feature finish in the 2018 Chili Bowl. Sussex will be relaxing and watching for most the week as he awaits his qualifying races on Friday.

Beyond excited to run this beauty @cbnationals can’t thank @ripjetson9 @EquiTeamLLC enough for making this possible! See ya in Tulsa pic.twitter.com/hgf5okjOJK

Always expect the name, Jerry Coons Jr. to pop up on the A-Feature list on Saturday night. Since 1994, Coons has made the top feature a whopping 18 times, finish a best of fourth on three different occasions. Coons has spent a lot of time in the USAC Silver Crown Series lately and finished in the top 10 in points in the USAC Silver Crown and Midget Series last year. Along with J.J. Yeley, Coons is a prestigious USAC Triple Crown Champion, having won championships in the USAC Silver Crown, Midget, and Sprint car series. Coons missed last year’s A-Main by only a few spots and looks to hop back into the Saturday feature this year. Even though Coons was already on track last week in the Tulsa Shootout, he’ll head back out again on Thursday for his qualifying races driving for Petry Motorsports.

Pretty impressed with @GatewayDirt so far and haven’t even suited up. @PetryMotorsprts cars are ready to go. pic.twitter.com/kOrUDie723

The Shuman family is synonymous with dirt racing around the nation. Son of ‘The Flying Shu,’ Ron Shuman, Casey hails out of the tiny town of Rattlesnake Bend, a place where if you blink, you drive right through it. The new director of the World of Outlaws Late Model Series is running for Mike & Brian Dunlap, has qualified for the Saturday A-Main five times since 2005. He finished in the D Feature last year and holds a best A Feature finish of 11th back in 2009. Shuman’s looking for his first A-Main appearance since 2015 when he hits his qualifying day on Thursday.

Go onboard with Casey from the 2016 Chili Bowl below.

Tempe’s Sterling Cling will be teammates with fellow Arizonan, Jerry Coons Jr. in this year’s Chili Bowl. Running for Petry Motorsports, Cling has been running sprint cars and midgets throughout the 2018 calendar year and even ran some Lucas Oil Off Road races. Cling finished the F Feature on Saturday night in 2018 and has his qualifying day set for Tuesday.

Excited to be behind the wheel of the @PetryMotorsprts 4th car and make my first @USACNation start at Bakersfield and again at Turkey Night. Big thanks to everyone who made this possible pic.twitter.com/uVgOcyFLnt

The five-time USAC Southwest Sprint Car Champion, R.J. Johnson will make another appearance in the Chili Bowl Nationals. After finishing 6th in the USAC/CRA points in 2018, Johnson and his father, Ricky, bring a stable three midgets to Tulsa Expo Speedway. Johnson has taken home three prelim heat wins but is still looking for his first A-Feature appearance to tie his dad, Ricky, in appearances. Johnson finished up in the C Feature in 2018 and hits the track on Thursday for qualifying.

Youngster, Zachary Madrid is just one of a handful of Southern Arizonan Drivers to enter the 2019 Chili Bowl and is racing for Ricky Johnson’s stable. Madrid likes to shake things up driving sprint cars and IMCA Modifieds on the regular. He’ll look to keep rolling off his 2018 San Tan Ford Desert Sprint Car Series Championship with a good finish in this year’s Chili Bowl. Madrid ended his 2018 Chili Bowl in the H Feature and has his 2019 qualifying day set for Wednesday.

Tucson native, Alex Bowman, has driven a midget only a couple times since 2012 but is giddy to hop into his self-owned car in the 2019 Chili Bowl. The successor to Dale Earnhardt Jr.’s No. 88 for Hendrick Motorsports is back in the Chili Bowl for the first time since 2016 where he won his preliminary night heat race. Bowman finished in the Saturday Night E Feature in his 2016 appearance. Don’t let all the pavement success make you think he can’t perform on dirt. Before his move to North Carolina to pursue NASCAR, Bowman was a USAC National Focus Midget champion in 2008 and the USAC National Midget Rookie of the Year in 2009. Bowman makes his return to midget racing to qualify on Tuesday.

Car owner @AlexBowman88 takes a hands on approach with the @Valvoline Midget. @CJ_Leary_ will be behind the wheel for tonight’s @USACNation #TurkeyNightGP at @VenturaRaceway.

Can’t make it to the track? Watch LIVE on https://t.co/AgyQwtrTxk! pic.twitter.com/VY9D3rtLq0

Last year’s Chili Bowl ‘Race of Champions’ winner, Chad Boat, has a rich family history in motorsports. Chad has tested the water of almost any oval racecar imaginable including Indy Lights, NASCAR, and lots of dirt cars. Chad started racing sprint cars at legendary Manzanita Speedway as a young teenager and started in midgets long before. His father, Billy, has five A-Feature appearances himself and is one of two Arizona-born drivers to win the Chili Bowl Nationals (Leland McSpadden, “The Tempe Tornado”) Chad drove from 24th to finish 10th in the A Feature last year. He takes the track late in the week to qualify on Friday but will be ready on Tuesday to defend his ‘Race of Champions’ crown.

Over 350 of the world’s greatest racers, only 24 spots in the A-Feature, and only one champion. Racing action from every day can be watched live on RacinBoys, and the top three mains on Saturday night will be live on MAVTV.

Do you have a prediction for this year’s Chili Bowl Champion? Join in on the conversation using @Sports360AZ and @devonhenry77.