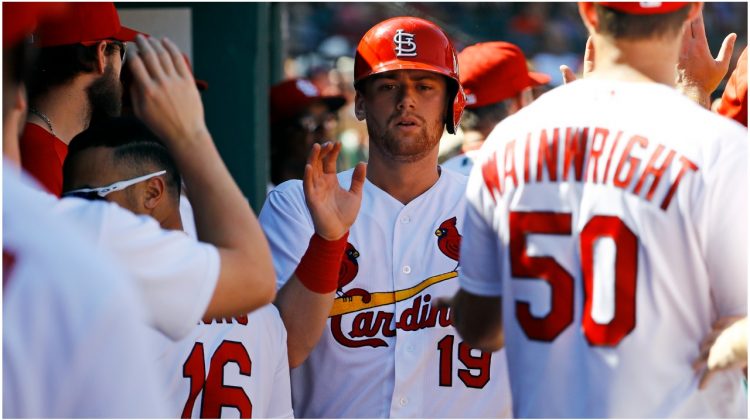 Newly-acquired catcher Carson Kelly knows the Diamondbacks better than most would think. Growing up, the Oregon native and his family would make trips to Arizona for spring training grow up and seeing the Diamondbacks.

As an infielder and 2nd round selection of the St. Louis Cardinals in the 2012 MLB Draft, Kelly transitioned to catcher, something he was well-prepared for. The new D-back says his father made sure his son knew how to play every position on the field, and Carson would lug around seven or eight gloves in his bag. He navigated the Minor Leagues, becoming the #3 prospect in the Cardinals’ system at one time, and eventually began working consistently with Cardinal catching legend Yadier Molina.

“I got to see him on a day-to-day basis and see how he goes about his business and how he prepares for a game and spring training,” Kelly said on Thursday. “I’ve gone to five spring trainings with him. I got to see firsthand the work ethic it takes to be the Gold Glove catcher and a leader of the team. I’ve just taken that stuff to heart, written a lot of stuff down…taken a lot of information in and applied that to my game. Now I feel that I’ve got my opportunity to go out there and perform and show what I’ve got.”

Though, learning from one of the best catchers in baseball can be a double-edged sword. Kelly could learn the lessons to make him great from Molina, but he couldn’t apply those lessons consistently in Major League scenarios because of his mentor’s stranglehold on the position. In 117 at-bats over the course of three years, Kelly hit .154 with no home runs and 10 RBI.

“It was a tough situation for sure,” Kelly said. “It was more the mental side than the physical side I thought I was ready to play but getting those opportunities and not knowing when you might get another one, it weighted heavily on me. I think that is part of the reason I haven’t had a ton of success at the big league level yet is because of that.”

But the catcher believes he has a track record of performing offensively and defensively when he finds the field consistently.

“Every time I’ve gone back down to Triple-A, I’ve made it a goal to get in a groove and a rhythm…getting those opportunities fail, to succeed, to get kind of everything and get those consistent at-bats and playing time, it’s crucial for me. I’ve shown every time I go down to Triple-A and play, I can put up those kind of numbers.”

Carson Kelly was ranked by @BaseballAmerica as the 3rd-best catching prospect & the Cardinals' #3 prospect.

Kelly isn’t the only member of this trade that is hoping to become a consistent contributor for the Diamondbacks moving forward. In 2017, starter Luke Weaver looked like a potential staple of the Cardinals’ rotation for years to come, throwing 60.1 innings in 10 starts with a 3.88 ERA and 72 strikeouts. In an expanded role the following year, he struggled and ended up with an ERA close 5.00.

He comes to the desert looking to make tweaks to his game to regain his 2017 form.

“I’ve got a lot of things, information that I’ve stored up and thoughts in my throwing and workouts…kind of just building around that stuff,” Weaver said.  “I don’t think it’s anything drastic. I think I need to continue to do what I’ve been doing but just make some minor adjustments, getting information as the season goes and staying on top of that stuff.

“You find yourself in an inner battle with yourself physically and maybe mentally…I feel very good where I’m at right now, and things have been progressing tremendously well. I’m excited to come into the season to get back to where I was.”

The allure of Carson Kelly: great glove, excellent makeup. If he hits — he's got a good swing and is athletic — he's a star. Luke Weaver was really good in 2017, mediocre in 2018. Trade may hinge on who he really is. I've heard from six front offices, and all love the return.

If anyone knows about that inner battle, it’s Kelly. Whether it’s limited reps or second-year struggles, both of the key pieces returning to Arizona for Paul Goldschmidt are once again in similar scenarios as young ballplayers. The two were roommates at times in the Minor Leagues, and rose up the Cardinals’ farm system at the same time. Kelly hopes he can be part of the equation to get Weaver back to a frontline Major League starter.

“Sometimes he can get a little sporadic out there, more mentally than physically,” Kelly said of Weaver. “That’s kind of my job where I need to go out there and talk to him about it. That is something I think he needs to get back to. I think this opportunity with Arizona and a ‘fresh start’ or whatever it may be, it’s going to be a good reset for him. I think he’s going to have a big 2019 ahead.”

The battery-mates are swapping out Cardinal red for a darker shade, and Weaver knows the impact his catcher can have on him, especially when a pitch isn’t even being thrown.

“He’s caught me plenty of games to know what I do: the positives and negatives, things that maybe hold me back and the things that push me forward, just keeping me level in all that stuff,” Weaver said. “He’s a guy I can rely on…and for me to trust in him, he’s all I have back there With him back there, everything about his game is a huge plus. He’s going to fit in the organization perfectly, and they’re going to love him.”