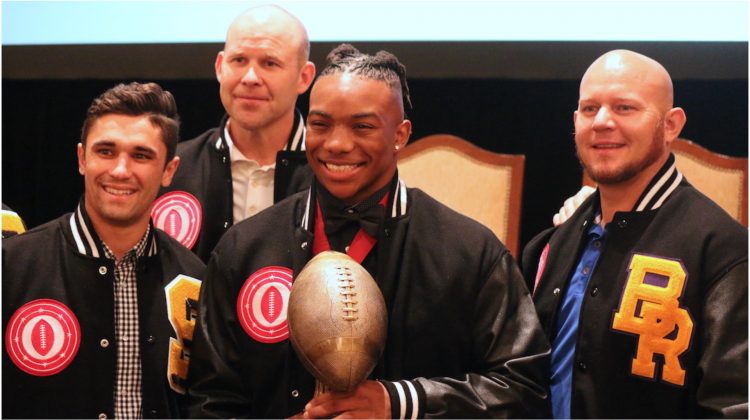 Robinson won the Arizona high school Heisman after a staggering 2,400 rushing yards and 35 rushing touchdowns on 170 carries. He averaged 186.7 yards per game 14.1 yards per carry.

Bijan Robinson thanks his family, coaches, and the other nominees in his #EdDohertyAward acceptance speech. pic.twitter.com/0YvsikWDvY

“It means a lot for the team,” Robinson said. “I try to put as much time and effort into the team. When I get back to Tucson, we will celebrate with it.”

Ed Doherty is the only man to be head coach for Arizona State University and the University of Arizona. This honor is especially meaningful to Robinson because Doherty also coached at Salpointe Catholic and the Lancers’ stadium is named after him. Current Salpointe head coach Dennis Bene played under Doherty and is frequently brought up to current Lancers.

And Bene sees similar qualities that Doherty valued in his running back.

Robinson has rushed for 4,801 yards 66 touchdowns in three seasons with Salpointe Catholic. He will look to lead a Lancers program that has appeared in two straight 4A state championship games and returns a great deal in 2019.

Lions punt downed inside 2. Cardinals lead by 3 in 4th Q
View on Twitter
0
1