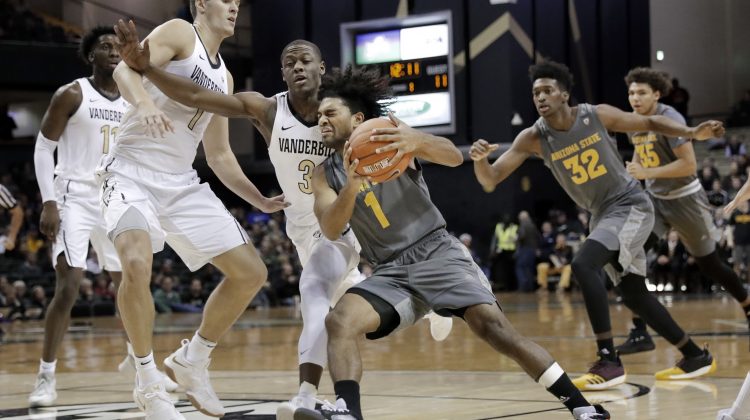 Arizona State has never knocked off a number-one team in Tempe. This Saturday night, top-ranked Kansas comes to the Sun Devils home court. Ticket scalpers, fans, and basketball lovers will get a glimpse of what a big time traveling program like KU brings to an opponents gym. Yes, a year ago Arizona State ambushed the Jayhawks in Lawerence. It was a signature win for Bobby Hurley. I’ve often felt that for a program like ASU to become a national power, they have to seize the national spotlight when it’s presented to them. There’s really no reason in my mind to believe that ASU can’t be a national brand like Arizona or Kansas. The excuse making of not being able to put together a national schedule disappeared once Ray Anderson and Hurley arrived.
Monday night the Sun Devils left a lot of points rolling around on the rim in a 81-65 road loss at Vanderbilt. Outside of Rob Edwards continuing to get more comfortable on the floor, most everything else was below what I’ve seen so far this season from the only</Pac-12 team ranked in the Top 25.
But I am one of those who believes that losing is sometimes the best antidote for a team during the course of a long season. Games like Monday in Nashville, are games that you play in March. ASU will grow from this mid-December setback.
Remy Martin’s ankle still isn’t right. He has a noticeable hitch in giddee-up when he tries to get up and down the floor. Martin is one of the few holdovers who was on the floor for last years shocker at Kansas. They need him to be right.
Will the nationally noted Kansas Jayhawk fan base take over Wells Fargo Arena? Will it be a Kansas home game in Tempe?
I had a ASU season ticket holder with four VERY good seats ask over the weekend if I thought he could get $1,000.00 per seat for the KU game. How many fans sold their tickets to the Jayhawks because the game is being played right before Christmas?
All fun stuff to talk about this week. Bottom line for me, is Hurley has finally moved the needle on a dormant program. It’s the best chance for the Sun Devils to sell a product that is worth the price of admission.