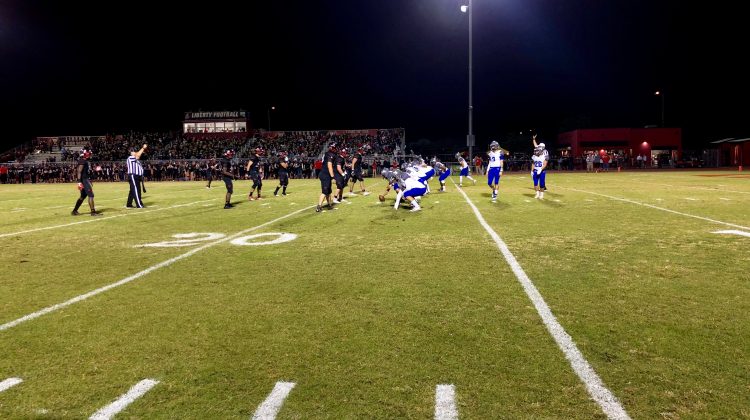 In my opinion, there is nothing like high school playoff football.

Between the passion of the players, coaches, cheerleaders, and administrators on the sidelines to the parents and fans in the stands, the atmosphere in any stadium is unmatched.

Friday night kicked off the 2018 Arizona high school playoffs and I had the opportunity to go to two different games out in the West Valley.

I started out at a 6A matchup with the No. 4 seeded Liberty hosting No. 13 Westview. Liberty took control early, scoring on their first three possessions.

A punt return. A pass. And a run. @LibertyFBLions first on the board after quick drive. #FridayNight360AZ

What stood out to me with this game was the diversity of the Lions offense. They put up 42 quick points in just the hour and five minutes I watched and six different Lions broke through the end zone in the 56-21 win.

Fun Fact: Late in the second quarter, Cal commit and defensive end, Braxten Croteau was one of the six different scorers when he caught a 4-yard touchdown pass, his second of the year.

Although senior running back Jett Kinsch rushed for two touchdowns and continued to put up good numbers, it was sophomore quarterback Brock Mast who impressed me the most. Mast had one rushing touchdown and he threw for three more, a solid performance for the sophomore.

Next week Liberty faces No. 5 seeded Highland, who also will be coming off a blowout win, 45-7, over No. 12 Cesar Chavez.

My second stop of the night ended up being a 4A playoff matchup between No. 4 Peoria and No. 13 Seton Catholic.

Got here just in time to see Peoria take the lead! 35-34 #FridayNight360AZ pic.twitter.com/2SjcrpTzIx

It was an offensive game, as I watched 44 points scored in the second half alone.

In this game, senior Malachi Potee for Peoria and senior quarterback Vincent Wallace stood out.

Potee has wheels. He racked up a number of yards including a 47-yard run to open the Panther’s second half drive and a 15-yard touchdown run to put Peoria within one point in the fourth quarter.

Wallace was the determining factor for the Sentinels with his calm demeanor and ability to move his offense up the field.

He showed his ability to show up in big moments when he scrambled and threw the game winning touchdown on a stellar pass (and grab) to Colten Christiensen.

Although the scoreboard leader fluctuated heavily throughout the night, the underdog, Seton Catholic, came away with the thrilling 54-49 victory.

It was a fun game, but one thing is obvious if the Sentinels want to continue their post-season push, they have to do better at defending the run game.

Peoria had their way with the Sentinels defense and marched up and down the field throughout the second half. In the end, the Seton Catholic defense made key plays when they needed to, to come survive round one.

For round two, Seton Catholic will travel to Tucson to take on No. 5 seeded Sahuaro. Sahuaro also found themselves in a down to the wire game as they upset No. 12 Glendale at home, 49-48.