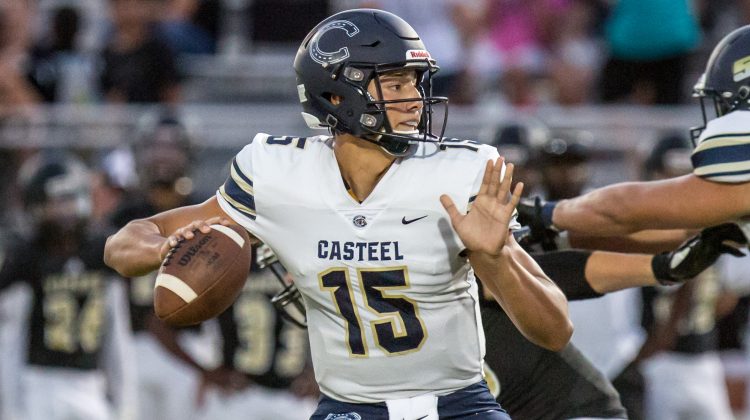 One round down, three to go.

There were plenty of interesting storylines in this opening round of the postseason, and here are a few things that jumped to me:

I was on the play-by-play call for Casteel and Horizon. Man, Casteel looks ready for a deep run. They controlled the game from the get-go and went up early 21-0 and didn’t look back in their 49-10 win. Gunner Cruz was spreading the love, had three passing touchdowns and two rushing touchdowns in the first half. Zach Nelson catches anything in his zip code. The defense was dominant. Oh, and Cruz threw for his first 100th career passing touchdown.

They now will play #4 Higley, who they beat 56-24 earlier this year. This game should be one of the best we’ll see this postseason. My bold prediction was that Higley will make a run, but seeing what Casteel did tonight makes me conflicted….

Congratulations to my boy @GunnerCruz on getting his 100th career passing touchdown!! Extremely proud of him and this o-line!! pic.twitter.com/Y9hxaDKkOj

Red Mountain pulled out what was one of the more exciting games this evening with a 37-34 upset win over the Bulldogs. The Mountain Lions have now rattled off five straight wins and only have lost to Perry and Basha this year. They also seem to be a tough out in the postseason, making it to the state semifinals the past two seasons as a #13 seed and #7 seed. Good on you guys for proving me wrong, and the Mountain Lions have a chance to continue to play spoiler as they have a tough test against #2 Pinnacle.

Speaking of spoilers, how about #13 Seton Catholic? They knocked off a very, very good Peoria 54-49. They now have to head to Tucson to take on #5 Sahuaro. They have an experienced quarterback in Vincent Wallace and plenty of options at the skill positions. They’ll be a tough out for sure.