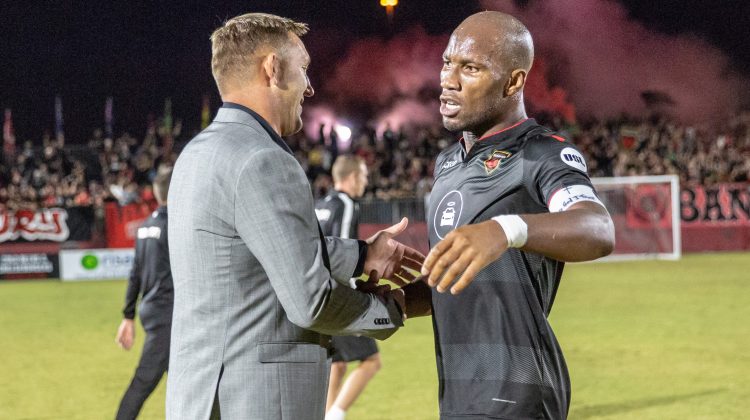 Thursday nights USL Title game in Louisville won’t just be the end of the season for Rising FC, it will also be the final time that soccer legend Didier Drogba laces up the boots and takes the field as a player. Drogba has been an interesting study from my view this season. There were times early in the year when the team played betterwhen he wasn’t on the field. When Drogba left in mid-season to be a broadcaster at the World Cup, the team was getting results without him. When he returned in late July, interim coach Rick Schantz had to rebuild the team. No easy task. Listen to Schantz tell a story to me earlier this week about Drogba and a moment that may have changed the fortunes of the franchise for this season.(GO to 20:40 mark on the podcast)

I’ve said and written many times that the ownership makeup of Rising FC should be a case study. Each man brings a skillset to the table that has allowed the team to grow. Brett Johnson is the longest tenured of the ownership group. He came to the franchise when they were still known as Arizona United. His path to ownership started one night in 2014 watching the MLS Cup on his couch, when it hit him about soccer and Phoenix. A quick google search lead him to Arizona United which led him to Linkiden and the name Kyle Eng. If you’re a fan of Rising FC, you owe a debt of gratitude to Eng for keeping soccer alive in Phoenix. Eng brought the franchise off of life support, the final heartbeats were happening when Eng put together a deal to buy the team(Phoenix FC) in March of 2014. “Kyle deserves recognition”, Johnson told me by phone on Tuesday, “he saved the sport of soccer in Arizona”. I reached Eng by text late Saturday night, “Very cool that they won the West!” was his response.
Johnson purchased a minority share of the team in December of 2015 and Eng would sell his majority share to Berke Bakay in August of 2016.
You shouldn’t forget those who sacrificed for the good of others. #brickbybrick