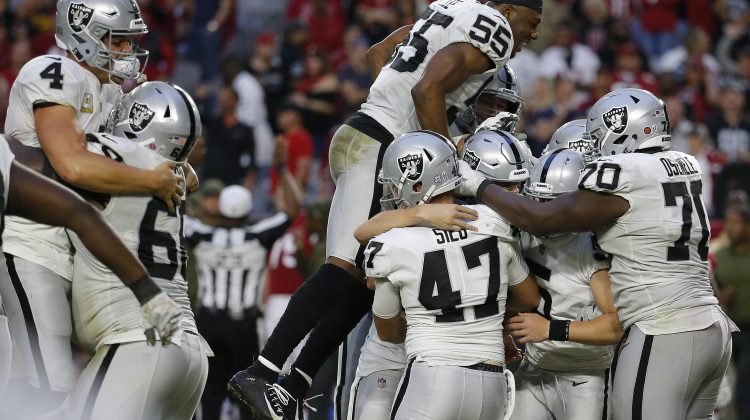 The Arizona Cardinals returned to State Farm Stadium Sunday and fell to the Oakland Raiders on a last-second field goal 23-21 in Glendale. With the loss the Cardinals fall to 2-8 and will play in Los Angeles against the Chargers next weekend.

1. Another Week, Another Loss…Good teams find ways to win games, bad ones find ways to lose them. Arizona’s defense had multiple opportunities to seal a win over a team they should have beaten but two dropped interceptions and a blown coverage on the Raiders’ final possession culminated in Daniel Carson’s 34-yard walk-off winner and Oakland’s second win of 2018. “Disappointing loss to say the least,” head coach Steve Wilks lamented. “We didn’t play smart football, particularly down the stretch. We beat ourselves.”

2. As Expected…There’s a reason the Raiders and Cardinals are two of the worst teams in the NFL and Sunday, at times, they showed why they had a combined three wins entering the game. Josh Rosen muffed a perfect snap while the Cards’ offense, at times, looked as out-of-sync as an early spring workout. There were plenty of punts, as well as penalties. The Raiders even drew one in the second quarter for calling back-to-back timeouts. Cameras also caught Derek Carr getting mouthy Jon Gruden. Jermaine Gresham was whistled for an unsportsmanlike conduct penalty late in the game. “The penalty hurt big-time,” Wilks said. “That’s just lack of concentration. All the guys need to be smarter than that.” Lipstick, meet pig.

3. Youth Movement….A handful of rookies saw extensive playing time against Oakland. Outside of the usual suspects (Rosen, Christian Kirk, Chase Edmonds, Mason Cole) players like left tackle Korey Cunningham and kicker Matt McCrane made their Arizona debuts. Said list doesn’t include a handful of other first-year players who saw action on special teams. In a season of struggles it’s only fitting the injury bug would jump up and bite the Birds in November.

4. Consistently Inconsistent…While no one will argue the Cards’ offense is certainly improved under offensive Byron Leftwich, the lulls in production are still glaring. In the first quarter Arizona tallied 142 total yards. They netted just 33 in the second and 13 in the third. There is simply no identity. “A lot of it is just mental errors,” Rosen said. “I know I had a bunch. Just dumb little things.” David Johnson was productive Sunday but not spectacular, until ripping off a 53-yard tote midway through the fourth quarter. Larry Fitzgerald caught an early touchdown, then was rarely targeted again for three quarters before catching the then go-ahead touchdown with just over five minutes to play.

5. Chan The Man…One player who brings it every week is Chandler Jones. The Pro-Bowler had two more sacks Sunday, bringing his total 38.5 since coming over from the Patriots in an off-season deal three years ago. Jones has the most in the NFL during that time span and more than some of the most feared pass-rushers in the game like Von Miller, Aaron Donald and Ryan Kerrigan.