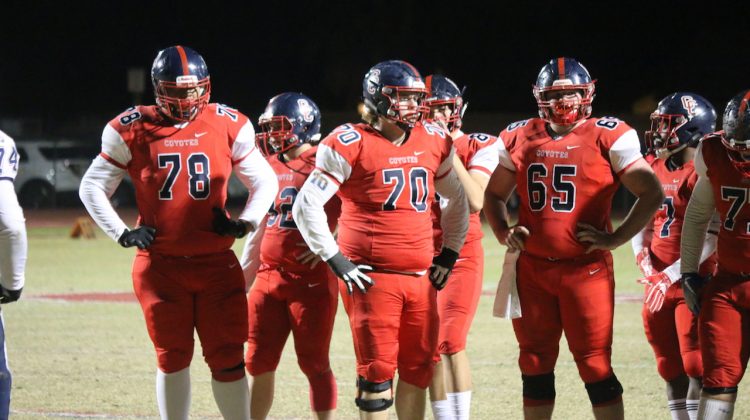 Two west side teams had a shot at the six AIA State Football Championships. One west side team’s fate had already been decided, and another is up for grabs this Saturday afternoon.

Battle of the Unbeatens:

The average margin of victory in their three, state championship wins over the last four years? 18 points. That includes the ‘Yotes 21-point win against Notre Dame Prep last season.

This is Centennial’s fifth straight trip to an AIA State Championship, losing only once to Williams Field in 2016. They once again face the NDP Saints with the teams holding a combined 26-0 record. After losing 35 seniors last season, Centennial is a much different team but their youth might be the key to their success.

“We have young kids who work really hard,” Centennial head coach, Richard Taylor, told Best in the West. “Everybody in our program knows we don’t care what grade you are. Just because you’re a senior, you don’t automatically get the position, you have to earn it.”

The Saints may have the most electric offense the Coyotes have seen all year. Senior Quarterback, Jake Farrell, has accumulated 3,230 passing yards and 41 touchdowns over his 13 games, often utilizing his favorite target, Jake Smith, who has 22 TD catches. Smith is a senior now and one of the most versatile players in the 5A racking up 1,837 total yards and 39 touchdowns.

“Jake Smith is one of the, if not the fastest kids in the state,” said Taylor. “He’s often a man among boys. One of the things we’re going to have to do is know where ‘number one’ is all the time. Our defense will play like they always do, but we’re up against a formable foe.”

The defense will also have to focus on running back, Dominick Mastro, who has added on another 13 TD’s and over 1500 rush yards. Watch out for the stout senior defensive line of Centennial to be busy all night long forming a brick wall. Seniors, Connor Knudsen, Leandre Harris, and Marquis Walker, lead the team in sacks while combining for 37.5 on the season.

@Cehsfootball Thankful for all the men that work all year long for this opportunity. #teamteammatesself pic.twitter.com/xJ0vPU4KmS

“Every team has its own personality and I would say that this group caught on to concepts really fast,” said Taylor. “We’re very blessed to have that opportunity [to play in the state championship] and to share that with players and family and community. It’s something that they’ll remember the rest of their life.”

Centennial battles Notre Dame Prep at 12:30 pm in Sun Devil Stadium for their seventh championship since 2006.

🏆CHAMPIONSHIP WEEK🏆 OUR BOYS HEAD UNDEFEATED INTO THE CHAMPIONSHIP vs NDP 👀 GAME IS THIS [email protected] ASU 🔱🔱 KICKOFF IS 12:30pm ‼️ WE WILL BE SITTING ON THE HOME SIDE OF THE STADIUM‼️ THEME FOR THE GAME IS ⬜️⬜️WHITE OUT⬜️⬜️ COME BE APART OF SCHOOL HISTORY & GET HYPE 🤪

One Down, One to Go

While the 6A, 5A, and 4A Conference will play their championships in university stadiums this weekend, the 3A and 2A Conferences held their title games the night after Thanksgiving. Northwest Christian was the only west valley school in contention for a title and created an absolute classic in the 3A title bout.

A triple-overtime thriller ensued in the rematch between the Crusaders and Yuma Catholic creating an instant classic. Northwest Christian made a fourth-quarter comeback to seal their first state championship since 2012 40-37 in triple OT.

“It was starting to get a little crazy,” said Northwest Christian head coach, David Inness. “It was happening so fast you didn’t really have a whole lot to think about and you had to hurry and move to the next play.”

The Crusader’s lone blemish was a six-point loss to Yuma Catholic in the second game of the season, giving Yuma a confidence advantage. Inness believes it wasn’t just what they learned from that loss that made them better, but also the attitude the rest of the year.

“The biggest thing that we took from that was both teams made quite a bit of mistakes,” said Inness. “You could just tell how disappointed they were in how they played and how much better they know they could play.”

Thanks to everyone who came out to support the Crusaders! STATE CHAMPIONS! pic.twitter.com/ioPuChhYGw

The game didn’t just end in phenomenal fashion because of the walk-off touchdown, but also because the one who caught the game-winner was senior receiver, Dustin Inness, the son of David Inness, in his final high school game.

“You’re always a proud dad. We called the play and he was smart enough to get enough depth. I didn’t see the catch, I just saw the pile and when he got up, it was pretty darn special.”

And with the championship coming the day after Thanksgiving, it will surely be a story told around the Inness family dinner table for decades to come and he thinks it maybe told in an even crazier fashion. “I can’t imagine how the story is going to get inflated over the years!”

Be sure to go support the only west side team at Sun Devil Stadium at 12:30 pm. Also, be sure to listen to the Best in the West Podcast on Wednesday where we talk to Richard Taylor and David Inness more in-depth. If you’re at any of the state title games, don’t forget to use #FridayNight360AZ to join in on all the talk under the lights!