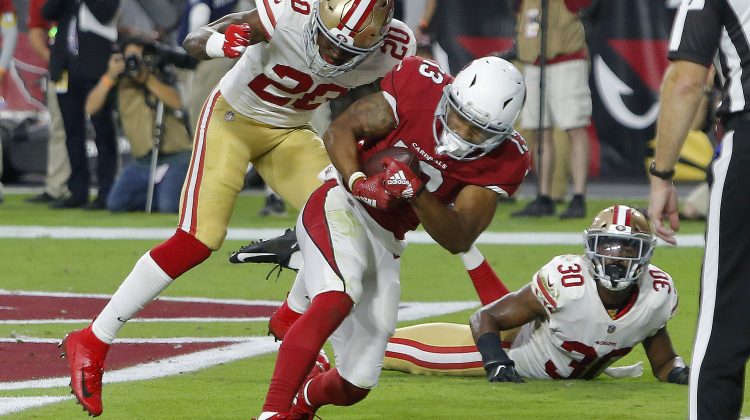 The Arizona Cardinals enter the bye week with their first home win of 2018 beating NFC West foe San Francisco 18-15 at State Farm Stadium in Glendale. With the victory the Cards improve to 2-6. The 49ers are now 1-7.

1. Rose(n) In Bloom…Could Josh Rosen’s late-fourth quarter touchdown in the back of the end zone to fellow rookie Christian Kirk be the play/game we look back on several years later and peg as his “defining moment” as an NFL quarterback? Maybe. For now, the Bird Gang must simply bask in present glow of Sunday success…which has been few and far between through the first eight games. The rookie from UCLA, despite struggling early, looked unfazed when the game was on the line.  Rosen finished 23-40 for 252 yards and two touchdown. He threw one interception. “I laid there for a second because it didn’t feel good getting hit like that,” Kirk said with a smile about catching the game winner. “It feels amazing. I knew from the depth of the route I was going to be inbounds…I knew once they called the play it was coming my way.”

2. New Wrinkles…The Cards’ offense did show some different looks on both sides od the ball. David Johnson got involved in the passing game catching three balls for 42 yards in the first half. Defensively, the Cards used three linebackers against San Francisco as opposed to an extra safety which they played almost exclusively since Week Two. They also slid Bene’ Benwikere from cornerback back to safety on passing downs for extra help in the back of the secondary. Maybe no player needed a breakout game more than Johnson. D.J. looked, at times, like his old self tallying 101 total yards on 20 touches.

3. Finding Fitz (Finally)…Arizona’s offense seemed to kick-start early in the fourth quarter after Rosen stepped up in the pocket and found Larry Fitzgerald deep for a beautiful 37-yard completion. Moments later the two connected again for a 12-yard score which not only pulled the Cards close but re-energized a sleepy, far-from-capacity, crowd inside State Farm Stadium. His eight catches (12 targets) for 102 yards were both season highs…which tells you just how poor Arizona’s offense has been through the first half of the season. The usually reserved Fitz also spiked the ball, for the first time in his NFL career, after catching a key two-point conversion following Kirk’s touchdown.

4. Getting Into The Groove…Call Sunday a feel-good game of sorts for new offensive coordinator Byron Leftwich and the Cardinals’ offense. The Niners are far from a dominant defense, one which has been depleted by injuries, but what Rosen and the Arizona offense did in the second half is certainly progress. “I thought we did a good job,” head coach Steve Wilks said. “Byron had us into a rhythm. As you can see, the operations were great from a standpoint of just getting a play in, being able to get to the line of scrimmage, and ID’ing the defense and linebacker.” The Red Birds eclipsed 300 yards of total offense for the first time in 2018 and averaged five yards per play. They were also 6-14 on third down after a dreadful first half (see below).

5. First Half Follies…In many ways this game followed script early, considering it was two teams who entered the game a combined 2-12 on the season. The “Battle of Bad” played to a near draw in the first half with San Francisco taking a 5-3 lead into intermission. Both teams were 1-6 on third downs (an area where Arizona had struggled the entire season entering Sunday) and combined for eight penalties and 162 yards of total offense. Quite simply, a case of two bad offenses, not two good defenses in the first 30 minutes of play.