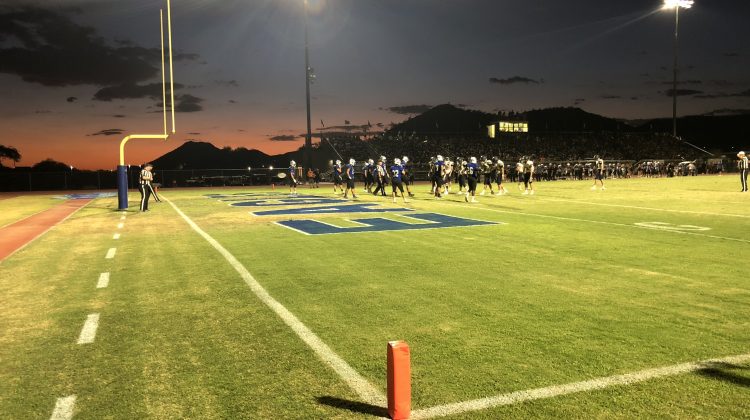 Arizona high school football is something else.

I feel like every Friday night I come home to work on turning that night’s story, looking back on the film I got and thinking to myself, ‘Wow, there is a lot of talent in this state.’

Last night, I witnessed a freshman running back start on Varsity and score five touchdowns, rushing for over 250 yards. Four of those touchdowns were in the second half to help his team run away with a big victory.

I feel as though I’ve been around Arizona high school football long enough now to not be surprised by watching something like that.

I’ve seen players catch passes that look like they should be way incomplete, seen defenders make a play out of no where, and yet, as I was sending a tweet about this freshman’s third touchdown of the night, my jaw still dropped to see this kid rushing past me for his fourth.

Grubbs has only played in five Varsity games, but by watching him play you’d think he was at least a junior.

Boulder Creek was able to keep him quiet after he broke out for his first long TD run in the first quarter, but he came out in the second half guns a-blazing ready to make a mark.

Grubbs with his FOURTH touchdown run. Only a freshman, kid has got some wheels.

After TDs, first person he’s gone to on sidelines was his brother, junior Tyson Grubbs, #8 who is on the sidelines with a boot on his right foot.

Grubbs isn’t the first player that I’ve been in awe of this season.

In week one, I watched as junior back-up quarterback J.D. Johnson of Pinnacle stepped up for the Pioneers after the nation’s number one quarterback in Spencer Rattler came out in the first quarter with an ankle injury.

Johnson had three touchdowns in that game, completing 14 of 17 pass attempts with 250 passing yards, lifting Pinnacle to a 56-34 victory over Mountain Pointe.

JD Johnson been at QB for Pinnacle since mid Q1, has settled right in. Finds Libman to extend lead, 28-14, Pioneers. #FridayNight360AZ pic.twitter.com/TBobH4GvTy

Brophy’s Will Broucek is another player that has floored me. Watching this kid play defense, it’s like he’s a magnet to wherever the ball is. I saw him play against Mesa Mountain View where he had a season-high 12 tackles, seven of which were solo.

The same goes for Kohner Cullimore of Highland. Cullimore has insane talent on both sides of the ball and is always making a play no matter where he’s playing.

While what these athletes are doing on the field is remarkable, I’m also always impressed in speaking with them and learning their stories.

Johnson had been waiting for that moment to be called upon for Pinnacle. He knew he had it in him to get it done, he told me.

Cullimore never wants to leave the field while playing for the Hawks, but knows he has to in order to have the energy to keep making big plays, he said.

Broucek is the heart of Brophy’s defense, as head coach Jon Kitna says, and a natural leader.

All three of these players have been great kids to chat with in addition to watching them play.

After tonight’s game I spoke with Grubbs about his performance. He blew me away again with his ability to answer my questions about what he saw on the field and what the accomplishment meant to him. If it weren’t for having his class year on a roster, I never would have guessed he was only a freshman with how eloquently he spoke.

For Grubbs, one of the reasons that he has gotten this opportunity on Varsity as a freshman is because his older brother, junior Tyson Grubbs, is out with a right foot injury he sustained during DV’s game against Highland earlier this season.

Every time Devon came off the field after a touchdown, Tyson was one of the first to congratulate him with a hug. Tyson told me post-game that he was so proud of his little brother’s huge performance.

BC responds quickly, as Hendrix Johnson shows off his speed for a long TD run.

I think I could probably detail something from every game I’ve covered this year that has impressed me, whether it be a players’ performance or a conversation with a player, coach or fan, but that would take much longer than I’m sure you’d like to sit here and read for.

So, here’s to the rest of what is guaranteed to be an exciting finish to the 2018 season. Keep on being impressive AZ high school football.