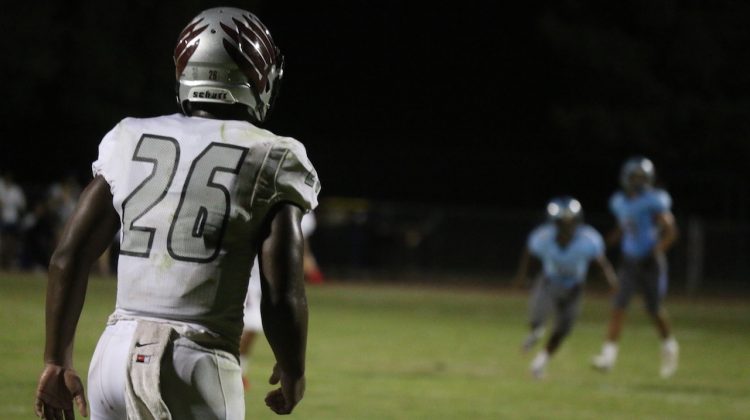 After a week of amazing west side matches, some teams will be going outside the west valley for the final time this season. So, while we have a few less games in the west, there are plenty of key matchups and great road games, so let’s get going!

Game of the Week: Centennial @ Ironwood

The Centennial Coyotes continued their 5A supremacy with a 49-0 shutout over Sunnyslope last week. The ‘Yotes are still undefeated and ranked first in the Conference with only three weeks of football before the tournament begins.

The continued offensive dominance by junior quarterback, Jonathan Morris, and senior running back, Tawee Walker, has propelled Centennial to being arguably the best team in the west valley, if not the state. To complement their outstanding offense, the Coyote defense has only allowed an average of a touchdown per game.

While Centennial still sits comfortably atop the conference, there are many teams fighting to be in the top 16 teams to make this year’s tournament. The Ironwood Eagles, who ended last season 2-8, are one of those teams.

Following a 35-13 win at Apollo, the Eagles have nearly tripled last season’s win total now standing at 5-2 on the year. Senior QB, Devante Wimbish, has carried this team, and the football, averaging over 150 rush yards per game. Leading the Eagle defensive has been seniors, Stone Aguirre, Spencer Forsberg, and Chance Neel.

Devante Wimbish contributed to all 35 points… 4 rushing TDs and 1 passing TD… that O-Line was working for them yards 🤫 congrats boys https://t.co/7J34KpCPtB

Head coach, Ian Curtis, told ‘Best in the West’ the senior leadership on both sides of the ball has been the difference maker between this year and last year. “The entire coaching staff has been waiting for the arrival of this senior class. They’re now seniors and senior veterans and their leadership is paying dividends.”

Ironwood still has a good chance to make the 5A tournament and will try to prove their worth with their outing against Centennial.

For the first time since 2012, the Liberty Lions are undefeated through seven games after defeating Boulder Creek 49-34. Junior quarterback, Jonah Guevara, nearly doubled his rush TD total with three touchdowns running the turf. The Lions have once completed a perfect season back in 2011 and must put up the fight of their lives this week to have a shot to do it again.

Few people know he is a track star too. https://t.co/HOrxnbQKJW

The lone undefeated team in 6A faces one of the premier teams in the Conference. The 6-1 Pinnacle Pioneers house one of the top QBs in the state, Spencer Rattler, an Oklahoma commit. Rattler has pumbled teams averaging nearly 300 pass yards per game, and typically getting pulled out by the end of the game due to their large leads.

It will be all about the defense limiting the Pioneer scoring, letting Guevara and running back, Jett Kinsch, work with the rest of the offense to keep up with Pinnacle in the end zone. Cameron Ellis, Eli Pittman, Ryan Puskas, Braxten Croteau, and Luke Pauga all have their work cut out for them pressuring Rattler and continuing great coverage. Limiting Pinnacle is a tall task as the Pioneers have scored over 40 points in every game besides their loss to JSerra Catholic (CA) when they only scored 35 points.

⁦@BCJAGS⁩ has a couple really fast kids. We do too. ⁦@Cameronellis02⁩ gets wide open behind secondary for TD first lead 17-14 pic.twitter.com/AiCXPu0znh

With Liberty constantly being ranked towards the top of the 6A, this is the Lion’s test to prove if they truly belong there. This will be one of the toughest opponents any west side schools play all year long.

You could call the 4A Skyline Region a tossup at this point with multiple region games coming down to four points or less in only three weeks of action. Currently atop the region, due to tie-breaker with Tempe, is the Greenway Demons.

It seems like a three-way battle for the championship between the Demons, Tempe, and St. Mary’s with Greenway having the pleasure of facing the former two back-to-back on the road. These next two games could decide the region champ with a week left in the season.

Behind great QB play by senior, Tyler Duncan, the Demon offense is scoring over 35 points per game. Greenway surpassed 3000 total yards on the year following their 42-39 win over Thunderbird last Friday, ranking them fourth in the conference in that stat.

I love Slick Nick.. But Duncan at Greenway is REALLY good.. and needs more attention too!!!!

Be sure to keep an eye out for junior, Nick Deaver, who has accumulated seven sacks on the year. The Demons will continue to pressure the St. Mary’s backfield this week while seniors, Caden Howen-Hughes and TJ Murphy, help Duncan dominate the scoreboard.

There are plenty of fantastic games across the whole west side, so be sure to head out and support your team. Be sure to check out the Best in the West Podcast with Ironwood head coach, Ian Curtis, and Ottawa University coach, Mike Nesbitt. And of course, don’t forget to use #FridayNight360AZ to join in on all the talk under the lights!