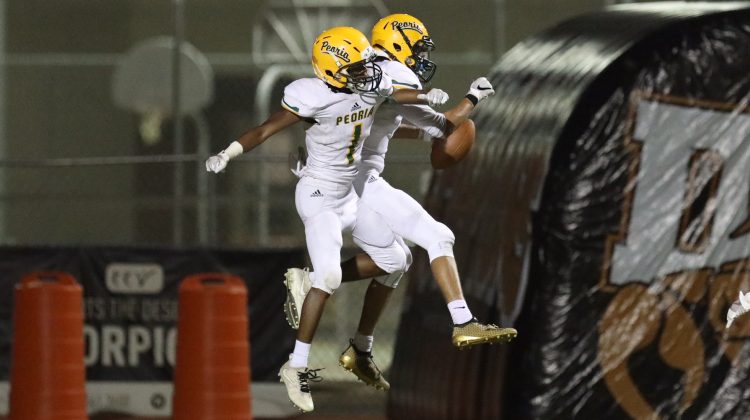 The final week of the regular season is upon us! It’s make or break time for the state tournaments and time to celebrate fans and players alike. Week ten has brought us huge rivalry games, so let’s jump in one last time before eliminations!

Game of the Week: Cactus @ Peoria

One of the oldest rivalries in the state will hit center stage for the 33rd time. The Cactus Cobras are on the edge of hosting in the first two rounds of the AIA 4A State Tourney. Meanwhile, Peoria is on the edge of have a first round home match.

The rivalry dates to Cactus’ opening year in 1978, and since, the Cobras have jumped to an 18-13-1 record against their long-time foes. While Cactus has won the last three straight, three of the last five games have been decided by just a touchdown or less.

Last time around, Cactus ran their way to a 57-34 victory with a firm rush game while Peoria couldn’t keep up in the air. The teams have flip-flopped since with Cactus receiver, Zaach Cullop, being the primary heartbeat on offense, accumulating 13 total TD’s through nearly 1,000 yards. Anthony Flores has been a consistent option rushing for over 800 yards racking up another 12 touchdowns.

This year, Peoria stands tall behind their run game. Juwaun Price and Malachi Potee have combined for more than 2,000 rush yards and 26 touchdowns on the ground.

Ironically enough, even though both offenses have changed their main attack from last year, both defenses can match up well. Junior, Micho Cordero, leads Peoria with 4 of the Panthers 7 INT’s this season with Alaa Barakat backing him up with 114 season tackles.

To stop the run game and rush the QB, Cactus is equipped with four different players totaling five or more sacks this year. Junior, Nate Quinones, leads the team in sacks, but also ranks third in tackles on the team, behind brother, Nicc.

Not only is this another great rivalry meeting, but also a huge week ten game with tournament implications. There have been a couple close calls, but could this be a year these two meet in the state tournament as well?

Just like any classic rivalry, the Liberty Lions were formed by taking a class of students from nearby PUSD school, Sunrise Mountain. That, of course, formed a city rivalry until Liberty grew too large and moved up a conference. With the loss of this rivalry, Liberty found a new Peoria foe in Centennial, reaching its climax in last year’s 5A Conference semi-finals.

With Liberty up to 6A, ‘Yotes vs Lion has fallen to the wayside. The Lion’s rivals, Sunrise Mountain has moved into 5A though, and this Friday night may start a new Peoria rivalry; ‘Yotes vs Mustangs.

Centennial has only allowed one team to score double-digits on them during this perfect season. No, not Bishop Gorman (NV), but Casteel back in week zero. While the Coyotes have shutout their last three opponents, junior quarterback, Jonathan Morris, hasn’t played in the last six quarters following an injury against Ironwood. He may come back with force with handing off to senior star, Tawee Walker, or passing to fellow juniors, Eric Haney and Dyelan Miller. Those three have combined for 18 TD’s.

Senior, Keegan Freid, has his work cut out for him against a Centennial defense that has only allowed 48 points in nine games. Freid has nearly as many TD’s and points that CeHS has allowed points. The senior QB has combined for 41 total touchdowns, 31 of those through the air to nine different receivers with senior Jay Anderson being his favorite.

Freid will be under a huge amount of pressure from the Coyotes d-line along with their stout secondary. If the Sunrise Mountain offense can keep up against Centennial’s defense, this could be one high-octane battle.

Let’s have some fun this week and take a jump all the way to the 2A Conference and go far to the west! Tonopah Valley is undefeated at home and fighting for a first-round home game following a tough 22-6 loss at Parker. The Phoenix face an undefeated Trivium Prep after a 28-8 homecoming night win.

Tonopah Valley juniors, CJ McClure and Cooper Arndt, lead the ground attack combining for 17 TD’s. It’s been senior, Dalton Thompson, who has been the heartbeat, though. Thompson has 5 rush and receiving touchdowns apiece, but adds a pick-six and fumble recovery TD to that defensively.

WE ARE BEYOND EXCITED!!

Dalton Thompson has worked hard for years to earn an opportunity to play at the next level. Thank you @shawn_kemmer and @JeffBowenACU for giving our players the opportunity! #itsagreatdaytobeaphx#riseup pic.twitter.com/aXCwMjX4q5

Trivium Prep’s flawless record has come from a balanced offense due to two offensive standouts. Junior, David Marquez, has run 17 touchdowns into the end zone while sophomore, August Hubbard has punched in another ten through the air. Senior, RJ Liston, will look to keep the Phoenix offense at bay with his three interceptions and 34 tackles.

A win for Trivium Prep would solidify their number two ranking in the 2A Conference, while Tonopah Valley will have to keep the offense on all cylinders to lock a home game in the 2A tournament.

Hendrix Johnson and the Boulder Creek Jaguars find themselves on the edge of this year’s 6A tournament. The Jags face one of the toughest teams in 6A, the Pinnacle Pioneers. The Pioneers will be without star quarterback, Spencer Rattler due to suspension. If that is the case, another NCAA DI recruit will take his place; junior, JD Johnson, who has nearly thrown 1000 yards as a backup.

To attempt to make a statement win to jump into the top 16, there will be no rest for the Boulder Creek defense. Coming off a 49-0 shutout of Mountain Ridge, the Jags defense will still need a tune-up. Seniors like Patrick Serrano and Kyle Harris will need to step up with their team to stop this Pioneer offense.

GREAT day to be a Boulder Creek football player and Canyon Spring Elementary Wolf. Thank you @CanyonSpringsDV for allowing us to work with the kids! We had a blast. Thank you BC players for being leaders in our community. #morethanfootball pic.twitter.com/BHDD3tHVok

This is the final chance for Boulder Creek to make the tournament, and wouldn’t it be spectacular to put up a great performance on senior night.

It’s the final night of the regular season as teams fight for tournament spots and celebrate their Seniors! Be sure to head out and support your team. Be sure to check out the Best in the West Podcast on Wednesday, and of course, don’t forget to use #FridayNight360AZ to join in on all the talk under the lights!