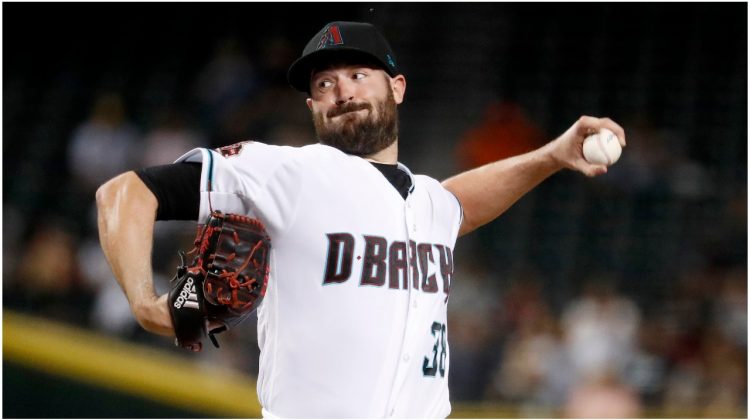 The Diamondbacks came back to Phoenix from a tough four-game road trip against the Dodgers hoping to re-ignite a spark with a two-game set against the Padres. Monday night was not the bounce back the D-backs were hoping for however, but a strong outing from Robbie Ray on Tuesday helped to end the skid.

“(It’s) nice to get back on the other side of things,” manager Torey Lovullo said postgame on Tuesday. “After losing four games in a row, three of which were extremely tough in L.A., very grinding types of losses, I thought we went out and executed a really good game plan today.”

Robbie Ray had himself a night on Tuesday. The lefty went 6 1/3 giving up only two hits with 10 Ks.

Ray said his last two outings have been the best that he’s felt mechanically this year. The starts have felt “effortless,” he said.

“My fastball command was about as good as it’s been all year and my off-speed was good too,” Ray said of what was working for him on Tuesday. “Just trusted Matty (Mathis) behind the plate, we had a game plan going into the game and we trusted it and went with it.”

The D-backs offense helped Ray work with a lead early after Nick Ahmed hit an RBI triple and Ketel Marte had a sac fly in the second inning to put AZ up 2-0.

Later in the game, the Padres’ defense would unravel as the D-backs put up four runs in the seventh inning.

Ray’s next start will be in the finale against the Braves. Lovullo had shuffled Ray’s and Godley’s start a couple weeks back and are now shifting the rotation as it originally was. Lovullo said it was always the intention to go back with Godley’s start following Ray’s.

Archie Bradley has been tossed around in his appearances as of late. On Tuesday, Lovullo brought Bradley to the bump in the eighth with a 6-0 lead.

Bradley came on and allowed a hit with his first pitch but came back and struck out two in the inning.

“I didn’t want Archie sitting on his past two outings,” Lovullo said. “It didn’t make a lot of sense, I know it was six to nothing, and even behind him I brought in Yoshi…we needed to win this game. Those are our guys, those are the guys that have been doing it all year long…Archie, he got knicked up a little bit in some crunch time situations and I didn’t want him sitting on that for today and tomorrow, which is a built in off-day.”

AJ Pollock made an impressive sliding catch on Tuesday night. It helped maintain a no-hit bid for Ray through four innings.

A.J. Pollock to the rescue!

The @Dbacks CF kept the Padres hitless by covering 99 feet to convert this 29% catch probability. pic.twitter.com/tHOVj3TrqV

Padres’ right fielder Franmil Reyes was a thorn in the D-backs’ side these two games and it all started on Monday with a three-run homer in the second inning off of Godley.

Then in the fourth inning, Reyes hit another homer off of the Bull which would be more than enough for San Diego to top Arizona.

The two home runs by Reyes were the only hits Godley gave up. His final line was four runs on two hits with seven strikeouts. It was Godley’s tenth consecutive outing with six plus Ks.

Godley said postgame that he felt great on the mound and that he only regretted two pitches in the outing.

“I felt like I made really, really good pitches,” Godley said. “I made two bad pitches on the night and both of them were paid for. I lost my focus there for the first three hitters in the second inning and they made me pay for it. Reyes put two really good swings on two pitches and that’s the difference for me.”

Reyes was also the hitter to end the no-no bid for Ray on Tuesday with a single to right field in the fifth.

The Atlanta Braves will be coming to town for a four-game set starting on Thursday. The Braves are currently in first place in the NL East, three games up on the Phillies.

Probable starters for the series are Zack Greinke on Thursday, Patrick Corbin on Friday, Clay Buchholz on Saturday and Ray on Sunday.