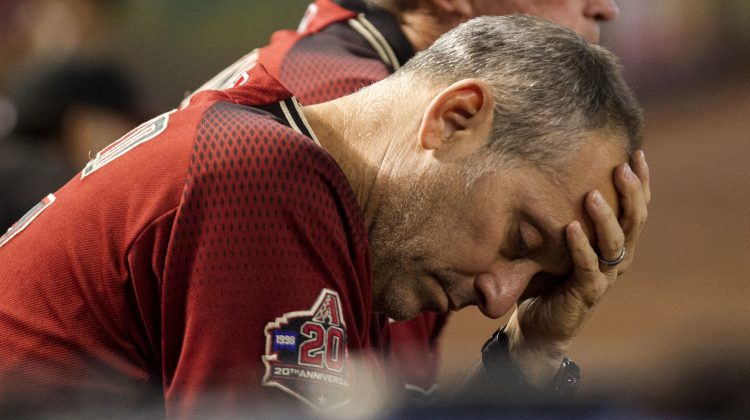 A Nick Ahmed deep fly-out in the sixth inning of Sunday’s loss to the Rockies was a microcosm of their second half as a whole. The Diamondbacks trailed 2-0, and with David Peralta on first, many D-backs fans believed Ahmed had delivered the blow that could get them back into the game. But the strike fell short of the left field bleachers by a few inches. Close, but not close enough.

After wins by the Dodgers, Rockies and Cardinals, the Diamondbacks have now been eliminated for postseason contention.

The Arizona Diamondbacks opened a lot of eyes in the 2017 season – making it to the National Leage Division Series and bouncing back from an incredibly disappointing 2016. Robbie Ray and Zack Godley each had breakout seasons. Jake Lamb made it to his first All-Star Game and had one of the best first halves in baseball. Archie Bradley had a new look and a new role, becoming one of the league’s best relievers.

The biggest questions leading into the 2018 season surrounded who would take over closing duties, could one of the many infielders on the roster emerge as the starting shortstop and who would they replace J.D. Martinez?

Now, as we sit here on September 23rd with the D-backs knowing extra baseball is not in their future, there are more questions than ever as they head to a crucial offseason for the Hazen-Lovullo regime.

Patrick Corbin has pitched like an ace, and will likely get ace money as he heads to free agency. His 3.23 ERA, 247 strikeouts and second career All-Star season could have priced the Diamondbacks out of the 28-year-old lefty, especially with a presumed thin pitching market this offseason. Can the club give Corbin the money needed for him to stay without handcuffing the rest of the salary?

A.J. Pollock, a key cog in the Diamondbacks’ success in past years, is also due to hit the market. When healthy, he helps the club in just about every way a position player can. Through the first six weeks of the season, we were thinking he could be an MVP contender.

But he’s played over 140 games in a season just once in his seven-year career. He doesn’t take plays off, even though Diamondback fans may want him to from time to time. While management has done a good job creating depth in the outfield, Pollock’s absence in the lineup is felt. He had a quiet second half, and that may make him more affordable for the club that is already setting franchise records for its payroll, but he will draw plenty of interest from other teams. What kind of money could A.J. Pollock see if he hit the open market? What number are the Diamondbacks comfortable with? If he doesn’t return, how does the club solidify a strong starting outfield with David Peralta and Steven Souza Jr.?

Corbin and Pollock headline a group of 11 that could see free agency, including the likes of Eduardo Escobar, Daniel Descalso, Jeff Mathis and Clay Buchholz.

Which brings us to the third base position. Jake Lamb’s injury timeline should have him ready for the 2019 season, but what is the future of the hot corner? After three seasons of significant time in the big leagues, its seems Lamb can hit, and hit for power, against the right-handed pitching but has hit .160 against lefties since 2015. Does the club continue to have him power through and hope those numbers against lefties improve or try to platoon the position and put him in scenarios that cater to his splits?

For most of the season, the Diamondbacks bullpen was one of the best in baseball. The trio of Yoshi Hirano, Archie Bradley and Brad Boxberger shortened games and slammed the door on opponents. Collectively, the group sported a 2.85 ERA in the first half, but after struggles from Bradley, Brad Boxberger being removed as the closer and many of the team’s midseason bullpen additions not panning out, the team had a 4.97 ERA in the second half. So where do they go from here? Do any of the three first-half workhorses emerge as the 2019 closer? Does Archie Bradley return to what he was his first season and a half as a reliever? Can the team create more depth in the ‘pen with up-and-coming arms like Silvino Bracho, Jimmie Sherfy and Yoan Lopez?

Entering 2018, it felt like the starting rotation was the area of the roster that had the most depth and could be the group the club leaned on in tough times. They were very good this season, having the fifth-best ERA in the National League, but the rotation has its fair share of uncertainty. After having career years by Robbie Ray and Zack Godley in 2017, both saw their numbers jump this season. Ray battled injuries and hard contact all year, but strung together a good August and a great September, dropping his ERA by over a full run in the last two months. Which Ray would we see in 2019: the 2017 All-Star version, they guy who struggled early in 2018 and had an ERA upwards of five, or somewhere in the middle, like this current iteration of the lefty we’ve seen in the last six weeks?

Godley has had an up-and-down year, losing five of his last six starts and failing to pitch over five innings in six of his last seven starts. Was 2017 a flash in the pan for Godley or will he bounce back in 2019 to be the innings-eater the club needs?

How will Taijuan Walker respond after missing the 2018 season in almost its entirety thanks to Tommy John surgery? If the Diamondbacks re-signed Buchholz, could they get a repeat performance of his 2018 season? Just how serious is his injury that ended his season early?

Many of these questions could be answered or become more clear when we learn what happens with Paul Goldschmidt this offseason. Should his contract remain the same entering the 2019 season, Goldschmidt would enter the final year of his incredibly manageable five-year, $36 million deal.

If the Diamondbacks see the 31-year-old Goldschmidt in the team’s long-term future, they will not want him to even sniff the open market this time next year. A bigger Goldschmidt contract, paired with Zack Greinke’s $104.5 million over the next three seasons, and the Diamondbacks would have to get creative with how they manage the rest of their salary.

With a team that was in playoff contention up until the last week of the season, can the club continue to push for playoff appearances over the coming years or will a rebuild, even a slight one, need to take place to replenish the farm system and set up for the future?

There are questions that will need to be answered for the 2019 Diamondbacks. No time like the present for them to start answering them.