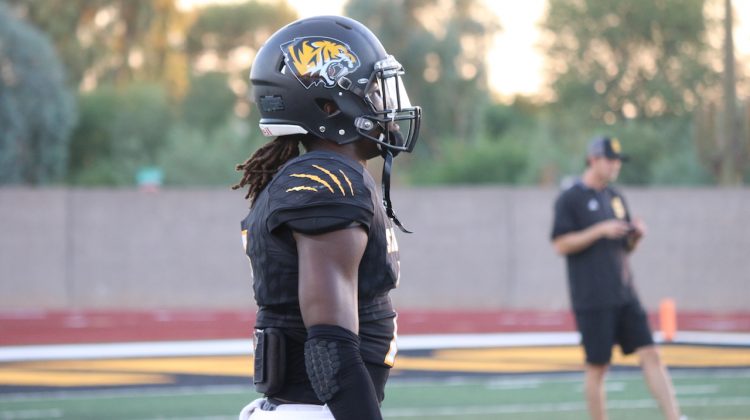 I was at the Saguaro v. Chaparral game, stayed until halftime and made it to the Cactus v. Salpointe game for the 4th quarter. Here are just some random thoughts from last night…

* Saguaro and Chaparral should play each other every year. It is a great rivalry. It is good for the city of Scottsdale and good for high school football. The game was packed. There were double-digit division-one players in the game. College coaches were in attendance. Just a great atmosphere. Not playing this game on a yearly basis is a crime.
* There were so many good players on the field, it was really hard to focus in on any one guy. But I am an o-line guy and the two young guys at Saguaro are freaks. Junior Jaylan Jeffers and sophomore Bram Walden are national level prospects. Sure, they have some maturing to do, but the tools are there.
* I knew Connor Soelle could run, but wow. He outran everyone on the field on his 80 yard screen pass he took in for a score. A guy that had better speed than I thought was Chaparral RB Darvon Hubbard. He got the scoring started on the night on a 50+ yard TD run.
* I love Tommy Christakos as a wide receiver, but after watching him kick last night, I couldn’t help but wonder if he might not get the highest level offers as a kicker. He has already hit from 53 yards this year and his kickoffs go out of the back of the endzone. Parker Lewis from Saguaro, the USC commit, is just as impressive. He hit a field goal from 50+ last night.
* I know Kelee Ringo is the #1 ranked corner in his class, and rightfully so. He is big and has run sub-10.6 in the 100 meters. He is already over 6 feet tall and weighs over 190 pounds and is just a junior. Does he grow into a safety?
* By the time I got to Cactus, Bijan Robinson and Lathan Ransom were about done for the night. But Salpointe has two offensive tackles that stood out. Sophomore Jonah Miller is going to be an elite level prospect. He doesn’t have any offers…yet. Senior Colin Dries has matured and grown into a college prospect. He stands 6’5″ and weighs 270 pounds now. Last year he was a backup and 30 pounds less. With his measurables, a FCS program could take a shot at him. He is also a guy that could benefit from a year or two of junior college.
Share Tweet Share