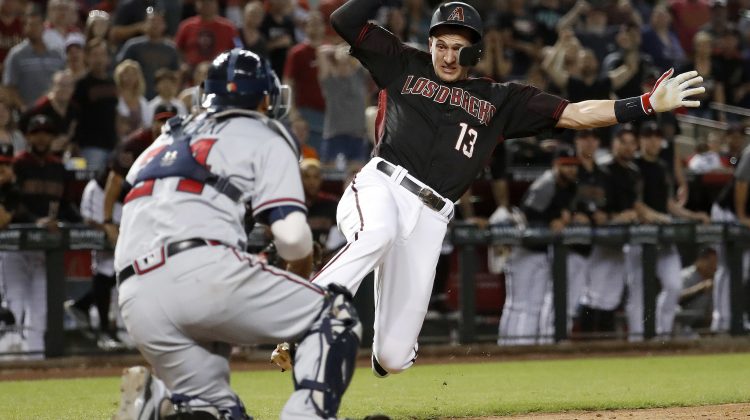 Arizona Diamondbacks Nick Ahmed (13) is tagged out at the plate by Atlanta Braves catcher Kurt Suzuki to end the baseball game Saturday, Sept. 8, 2018, in Phoenix. The Braves won 5-4 in 10 innings. (AP Photo/Matt York)

The Diamondbacks fought hard against the Braves in a four-game set over the weekend, but timely hitting from Atlanta and errors by Arizona cost the D-backs the series.

The Diamondbacks made four errors on Saturday night in the 5-4 loss to the Braves in extras. The first three came in just the first two innings of the game.

In the first inning David Peralta made a throwing error in left field that allowed a runner to move into scoring position and that runner would score. Then in the second inning, Daniel Descalso made a fielding error at second and Clay Buchholz made a throwing error on the pickoff attempt right after Descalso’s error.

In the tenth inning, Paul Goldschmidt made a throwing error that would round out the D-backs messy day.

"Today was not Arizona Diamondbacks baseball, in several areas." — Torey Lovullo after the #Dbacks' mistake-filled, 5-4 loss to the #Braves in 10 innings. pic.twitter.com/xVP1c5hyh4

“Today was not Arizona Diamondbacks baseball in several areas, and they’re all very obvious” manager Torey Lovullo said postgame on Saturday. “Defensively, I think we’re among the League leaders in picking up the baseball and doing what we’re supposed to do and it just didn’t happen today.”

The Diamondbacks also made a couple of base running mistakes that ended up being extremely costly in the waning parts of the game.

Down two runs in the bottom of the 10th, with two outs, a line drive up the middle by AJ Pollock would easily score Steven Souza Jr. from third. Third base coach Tony Perezchica then sent Nick Ahmed as he came around from second. Ahmed was gunned down by Braves’ shortstop Dansby Swanson for the final out of the game.

On Thursday, Boxberger was credited with the loss after Yoshi Hirano’s wild pitch led to a runner Boxberger was responsible for, scoring in the 10th. Then on Sunday, Boxberger recorded his seventh blown save of the year and was also given the loss as he allowed three hits, including a three-run home run by Braves’ Ender Inciarte in the ninth that would seal the win for the Braves.

"The Diamondback bullpen gave them (Braves) every reason to be confident because the short relievers couldn't hold them down the entire series."-Mark Grace on the D-backs loss. D-backs Live with post-game comments from Torey Lovullo coming up next! pic.twitter.com/bWejLDQT9P

Paul Goldschmidt had quite a weekend at the plate, but that’s no surprise.

On Thursday, Goldschmidt went 3-5 with a double and a home run. His homer tied the game and forced extras for the first time on the weekend. Friday, he went 2-2 with a home run and Sunday he went 1-3 with a triple.

The first baseman is batting at .298 for the season.

Nick Ahmed had a good weekend as well. Ahmed went 6-11 on the weekend, a .545 average on the series. He had two doubles with five RBI.

The D-backs had some clutch moments from AJ Pollock, Daniel Descalso, Jon Jay and David Peralta throughout the weekend, but the errors and pitching couldn’t overcome the power of the Braves.

Arizona is now 2.5 games back from Colorado in the NL West. LA is only a half game back from Colorado. The Dodgers got the series win against the Rockies at Coors Field to keep the race close. Now, the Diamondbacks will take on the challenge of the Rox as they head up for a four-game series.

The Diamondbacks’ schedule does not get any easier from here to the end of the month. Arizona will now hit the road for what will be a challenging trip to Colorado and then to Houston. Zack Godley will get the start on Monday, Zack Greinke on Tuesday, Patrick Corbin on Wednesday and Clay Buchholz on Thursday.