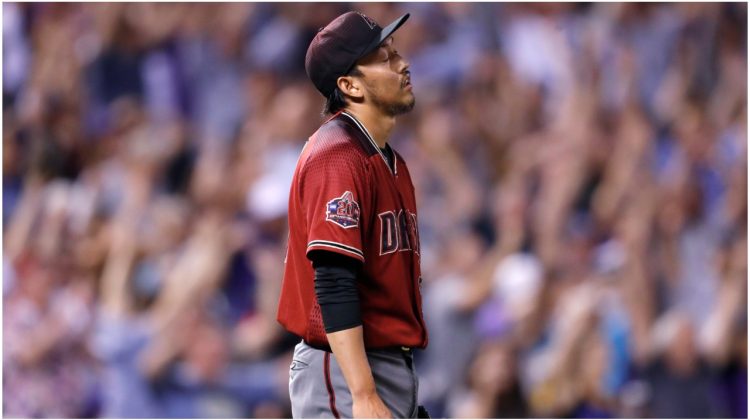 The Diamondbacks couldn’t keep the momentum going from Tuesday’s bounce back win as they wrapped a four-game series with the first place Rockies, coming out with only one win.

Clay Buchholz was scratched from his start on Thursday with right elbow tightness that he felt while warming up prior to Thursday’s finale against the Rockies, the Diamondbacks announced.

Torey : Clay felt elbow tightness 26 pitches into his warm up. Currently heading back to Phoenix for an MRI. The hope is that he could return if things check out ok

Buchholz has a 2.01 ERA in 16 starts with the D-backs in 2018 and has been a consistent starter for the D-backs here in the second half. His next start would be scheduled for Tuesday at Chase Field against the Cubs.

Bullpen trying to figure it out

Manager Torey Lovullo announced on Monday that Brad Boxberger would no longer be the D-backs’ closer. Lovullo said he will go about the closer role by matchups in order to go about the best way to get the final outs.

The @Dbacks will go closer by committee down the stretch, after removing Brad Boxberger from the closer's role. Veteran Daniel Descalso also will see more playing time. pic.twitter.com/z39plTuGXW

The bullpen was able to back up Zack Greinke on Tuesday as Brad Ziegler and Yoshi Hirano came in to shut the door on Colorado, with Hirano earning his first career save, but the rest of the series saw major struggle from the bullpen.

Monday night, Matt Andriese gave up seven runs on eight hits in his 1 1/3 innings pitched. One night after earning his first save, Hirano gave up a walk-off two run homer to Rockies’ DJ LaMahieu on Wednesday. Hirano’s fourth blown save of the year.

In the finale, a last minute scratch of Buchholz left the game essentially up to the bullpen after Koch only went three innings. Silvino Bracho went one inning allowing one run on two hits. Jake Diekman didn’t record an out as he gave up three runs on one hit. Boxberger went a third of an inning and allowed a run while Chafin closed out that inning allowing one run on three hits.

One glimmer of positivity was that Jimmie Sherfy was solid in both of his appearances this series. On Monday, Sherfy went 1 1/3 giving up one hit, with two strikeouts. Thursday, Sherfy went two innings allowing two hits with four strikeouts.

Additionally, Yoan Lopez, who made his MLB debut on Sunday, is settling into the big leagues. Lopez went one inning with two strikeouts in the finale.

A solid Greinke start was just what the Diamondbacks needed on Tuesday to snap a four-game losing streak. Greinke went 6 2/3 giving up three runs on six hits with five strikeouts.

Greinke has sat down 10 straight, including 4 by strikeout, since the #Rockies tied the game. pic.twitter.com/H1v88aGWEs

The bullpen came on in the seventh and finished what Greinke started to hold the Rockies and get the win.

Lovullo also announced on Monday that Daniel Descalso would be getting some more time at second base. After Descalso got the start on Monday, Ketel Marte was in the lineup on Tuesday and was a key part of the D-backs’ win.

Marte went 2 for 4 with four RBI on Tuesday. Descalso started on Wednesday and Marte was back in the lineup on Thursday where he went 1 for 3 with an RBI.

September doesn’t get easier for the D-backs as they head to Houston for a weekend against the 2017 World Champion Astros.

The last time the D-backs saw the Astros was at the beginning of May where they took two of three against Houston at Chase Field. One of those wins was a walk-off by AJ Pollock with Greinke on the bump, and the other was behind a strong start from Matt Koch.

Probable starters for the weekend are Robbie Ray on Friday, Godley on Saturday and Greinke on Sunday.