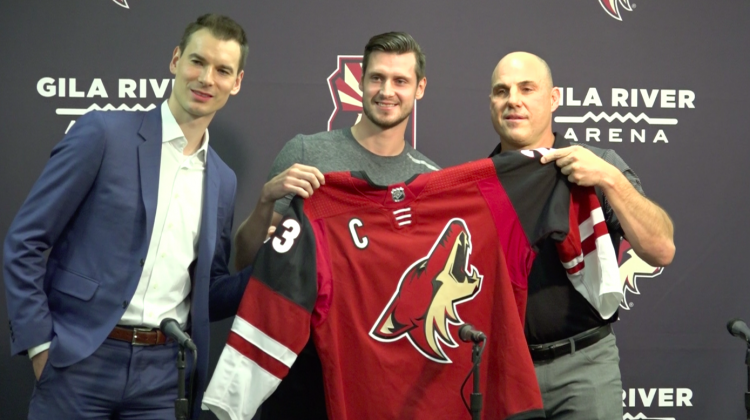 The Arizona Coyotes kicked off training camp on Thursday with a big announcement.

Defenseman Oliver Ekman-Larsson has been named team captain of the Coyotes.

“The feelings are all over the map right now,” Ekman-Larsson said. “I’m very proud and I know my family’s very proud of me to sit here today and be a captain of the Arizona Coyotes. I never dreamed about that growing up. It feels weird, I’m not going to lie.”

Ekman-Larsson is the 18th player in franchise history to score 100 goals and is six goals shy of tying the franchise record for goals by a defenseman, currently held by Teppo Numminen with 108. He helped lead the Coyotes to the 2012 Western Conference Final and is a two-time NHL All-Star.

“When I first came to the organization, I knew a lot about Oliver Ekman-Larsson the player,” Coyotes’ general manager John Chayka said. “He was a talented player, dynamic, one of the premiere defenseman in the league. Over the last three years, I’ve been able to learn about Oliver Ekman-Larsson the person and just seeing how he deals with his teammates, the respect he has for them and the respect he gets back…I think Oliver’s the next logical candidate for the next stage of our organization.”

The 2017-18 season the Coyotes did not name a captain. Former Coyotes’ captain Shane Doan had just retired and it was head coach Rick Tocchet’s first season with the team, so Tocchet wanted to get to know everyone and go through the process, he said.

As the season progressed, Ekman-Larsson was the guy Tocchet knew he felt would be perfect for the job.

“We had a lot of adversity last year,” Tocchet said. “When you have adversity you need good people, you need people that are going to lead. They don’t care about themselves all the time, they give themselves up for the team…(Oliver) was a no-brainer for us.”

Shane Doan on @OEL23 being named captain: “It’s a no-brainer. I’m confident Oliver will be absolutely amazing as captain. He’s somebody who exemplifies what you want your captain to be and leads by example. I’m happy for him. He deserves this huge honor.” pic.twitter.com/VSRwCkERJC

Ekman-Larsson is the fourth team captain in Coyotes history. He was alternate captain for the last four seasons, 2014-15 to 2017-18 alongside Doan.

“It’s going to be very hard to be the next captain after Shane Doan,” Ekman-Larsson said. “At the same time, I think I learned a lot from him and how he treats everybody around him with respect…I was fortunate to be around a guy like that.”

Ekman-Larsson said the advice Doan gave to him about being captain was to just be himself.

“I talked to Shane Doan and he told me to not change anything and just be yourself,” Ekman-Larsson said. “I think that’s the person I am. I’m here for a reason and I think they named me captain for a reason too. I’m just going to stay the same.”

Keep it on Sports360AZ.com for more from the next few weeks of Coyotes’ Training Camp.