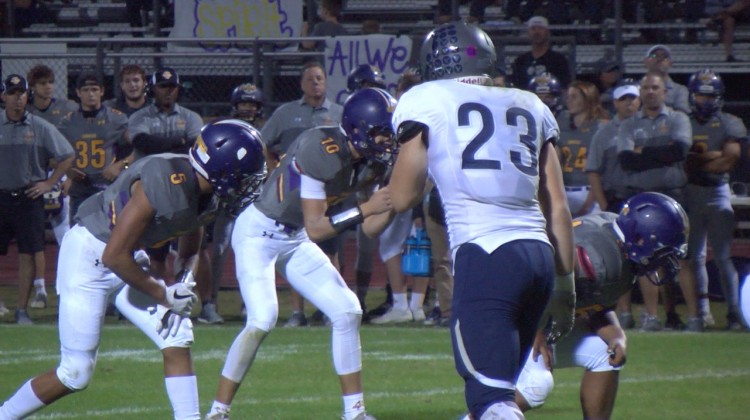 If you’re a fan of good football, you were a fan of the west side last Friday night. Sunrise Mountain held off Verrado 20-19 and Desert Edge made a game-winning throw at the buzzer to beat Peoria. With Region play in full force, there’s another great slate of games this week, so it’s time to jump back in!

Sunrise Mountain had a healthy lead on Verrado going into halftime, 20-7. The Vipers shocked the new 5A powerhouse by holding the Mustangs scoreless in the second half but fell short of their comeback in the final minutes.

Sunrise Mountain squeaked out a strange 20-19 win against Verrado but proved that they are human. The team advanced to 3-2 and starts their region play against one of their sister schools.

Ironwood’s Devante Wimbish put on the magic cleats again rushing for over 200 yards and five touchdowns. Along with his 97 pass yards, the Eagles pounded Willow Canyon 56-6.

Ironwood is riding high on one of their best seasons in recent history starting the year off with a 4-1 record. The Eagles face two powerhouses in the final half of the year playing Centennial and Sunrise Mountain in the 5A Northwest Region.

This is a key game to get back in shape for Sunrise Mountain. The Mustangs face one of the toughest challenges in the final week of the season when they visit defending 5A champions, Centennial. If the Mustangs can’t get in a grove at the start of region play, they’ll have an even taller hill to climb come week ten.

If the Mustangs easily bounce back following their close win, they’ll be nearly unstoppable. Wimbish must keep the offense flowing to have a  chance of keeping up with the Mustangs.

Desert Edge has shown their power moving into the 4A Conference this year.

If you made it out to Peoria’s visit to Desert Edge, you got to see quite a game. The only score in the first quarter was a safety before the floodgates opened. The game came down to the very last play.

Freshman QB, Adryan Lara, rolled out of the pocket heaving the ball 51-yards to junior receiver, Jihad Marks, who trotted the ball the final ten yards with time expired. 27-22, Scorpions. Talk about a walk-off.

With Desert Edge putting themselves near the top of the West Valley Region and the conference, they now face the ultimate task; Take down the Sabercats.

The last time Desert Edge took on the five-time defending state champions, Saguaro, it was a high-octane match ending in 77-48 Sabercat win back in 2013. Desert Edge has only two blemishes this year, losing to 5A Millennium and 2017 state runner-ups, Salpointe Catholic.

“Arm talent-wise, he’s pretty special. He has a real high ceiling.” @DEdgeFootball @Coach__Lucero on freshman QB @Adryan_Lara7 who can flat out spin it 🔥🏈!! VIDEO: 👀🎥⏩ https://t.co/4qOlaJK7YA pic.twitter.com/RFHAyOJDDm

The Scorpions game against the Lancers was only a seven-point loss, but they were shutout in the second half. While senior rushers, Kennith Powell and Kody Ball, kept the offense alive, the Desert Edge quarterback was sacked and intercepted four times apiece.

Saguaro’s lone loss was by ten points to Henderson’s Liberty High (NV), who is now ranked the top team in Nevada by MaxPreps. Liberty’s defense held the Sabercats to less than 200 total yards of offense, a tough task to do.

Nassir Sims, Cameron Steele, Andrew Ortiz, and the rest of the DEHS defense must be in top shape to limit Saguaro and give the Scorpion offense a chance to keep up on the scoreboard.

The Cactus Cobras have advanced to a 4-1 start after their 48-15 rout of Youngker last week. Coach Joe Ortiz has overcome a fair amount of adversity in his first year as the Cobras head coach after losing quarterback Conner Cordts to injury against Estrella Foothills two weeks ago.

Senior, Garrett Monroe, stepped into the role throwing 93 yards for two touchdowns, leading Cactus to their fourth win of the season.

The Cobras enter region play this week hosting a winless Deer Valley. Defense has been the constant for Cactus with Nate Quinones and Matthew Herrera combining for over 100 tackles and nine sacks on the year.

The Deer Valley offense must get rolling to stun the Cobras. Senior running back, Dez Melton, has been the heartbeat of the Skyhawks, accumulating 959 all-purpose yards. That’s 700 more yards than the next Deer Valley player.

Demons in the Desert

The Greenway Demons go into Skyline Region play with a 4-1 record. Besides their loss to Bradshaw Mountain, Greenway has put on offensive clinics averaging 40 points per game. Senior quarterback, Tyler Duncan, is averaging over 300 total yards in every game, pulsing his offense with help from his favorite receiver, Caden Howen-Hughes.

Up next @ Shadow Mountain pic.twitter.com/KAhGi9Vsgx

The Demons face Shadow Mountain, who picked themselves out of a three-game losing streak with a 14-13 win over Apache Junction. While Duncan controls the offense, the defense must contain the Matadors, with the help of junior, Heston Wahner, who’s racked up three interceptions on the season.

There’s a lot of great action all around the west valley this week and plenty of good games. Be sure to head out and support your team, but don’t forget to use #FridayNight360AZ to join in on all the talk under the lights!