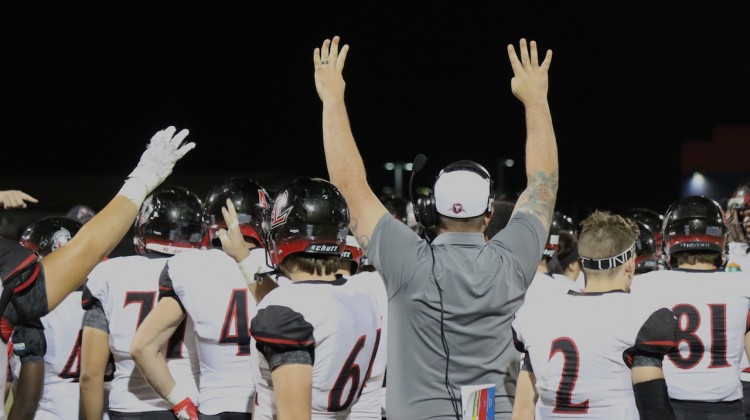 After an exhilarating week of football that brought a 9-time defending Nevada State Champion to town and another chapter to the youngest west valley rivalry, the west side will let you breathe a little with most schools traveling for away games.

West Valley Game of the Week: Centennial vs Cienega

Really? Centennial has the game of the week again? Well, when you’re good enough to take down Bishop Gorman, a school that was nationally ranked by MaxPreps, you get some spotlight. It also helps that most of the west side schools are on the road this Friday.

The Coyotes held the top-ranked school in Nevada scoreless through 47 minutes, pulling out a 13-7 win, marking their second win against a nationally ranked team in as many years.

Nevada native and Centennial senior, Tawee Walker was the Achilles Heel for the Las Vegas school, running in both touchdowns for the Coyotes. Bishop Gorman racked up nearly 400 total yards, but the Centennial defense kept the Gaels out of the end zone. The ‘Yotes even held Bishop Gorman back when they were attacking at the goal line and created a turnover on downs.

Expect Centennial to be nationally ranked when they host Cienega, a team that has scored 93 points in two games this season and was undefeated last year till getting bounced by Notre Dame Prep in the 5A semi-finals. The Bobcats have yet to test their offense against a stout all-around defense like Centennial, who boast top-notch defenders, including Tawee Walker. Yes, he plays great defense too.

The largest obstacle to overcome for the Bobcats will be getting into the end zone against a Coyote d-line that has allowed a mere 106 rush yards on the season. Centennial needs to stay focused and keep the spotlight out of their eyes.

Off Go the Jetts

The Liberty and Sunrise Mountain rivalry is making itself one of the best in the west valley. With three straight years of wins by six points or less, spectacular offensive performances, and group sing-a-longs, this “standing room only” crowd looked like a lot of fun to be a part of.

Way to bring it Mustang fans! Make sure our team hears you in the 2nd half! 💜💛💜💛🏈 #smhsfootball pic.twitter.com/oHdMnnC734

Air Force commit, Keegan Freid, once again showed off his versatility, being responsible for over 300 yards and all 43 points that the Mustangs put on the board.

Even though 43 points sure is a lot, the defenses were stout forcing a combined five “3-and-outs” in the first half. The Lions defense caused 90 lost yards in sacks led by Braxten Croteau’s four tackles on Freid in the backfield.

Offensively, Liberty’s Jett Kinsch ran with the team on his back, stepping into the end zone three times, including the game-winner with only 63 seconds to go. Liberty would cap off the win by stopping Freid’s march in the final seconds with a Jake Robinson interception ending the game with a 49-43 Lions victory.

Liberty takes their undefeated momentum on the road against a 2-1 Desert Ridge while the Mustangs get to take a week off before hosting Gilbert on Sept. 14.

SUNRISE-Keep your chin up!! Love this group!! We will be fine pic.twitter.com/Uj7uoVMc09

Wildcats on the Run

Moving to the far west side, Willow Canyon is showing off some of their new power starting off the season 2-0. Their dual-threat offense has accumulated 92 points in two games while their defense held Dysart to 14 points last week.

Zachary Swinbourne has been the standout for the Wildcats, rushing for over 200 yards against Dysart, including two 78-yard touchdown runs and another 32-yard TD rush for good measure.

Character Matters Football Competitor of the Week, Zach Swinbourne, Class of 2019! Zach compiled 214 yards on 6 carries & 3 TD’s against DHS. His precise execution in our game plan led to his success, which has also led to a nomination as West Valley Preps Athlete of the Week! pic.twitter.com/Xtv87EslPM

Willow Canyon will become the first Dysart Union School District team to play all of their fellow sister schools in a single season, after games against Shadow Ridge and Valley Vista in these next two weeks. They’re one for one in their quest to sweep the DUSD schools and must calm the offensive production of Shadow Ridge on Friday to fight with the Stallions.

Desert Edge has a case to win the 4A West Valley Region this year and a chance to fight for the State Championship against Saguaro. Their first test in the 4A Conference came last week when they traveled to last year’s state runner-ups, Salpointe Catholic.

After being up at halftime, the Scorpions were shutout in the second half, while Salpointe scored twice taking a 28-21 victory over Desert Edge.

It doesn’t get much easier next week for the Scorpions as they hit the road to play 5A Millennium. The Tigers have been on their toes this year with an average win margin of only four points. Desert Edge won last year’s meeting by only three points behind their rush game. They’ll have to pound the ground again this year to get the motor running again in Desert Edge’s first 4A season.

I was astonished while watching the Cactus Cobras’ Damaria Norris rush for five touchdowns against rival Peoria last season, a feat I thought I wouldn’t see again any time soon in a west side matchup. Anthony Flores proved me wrong.

While four touchdowns are, in fact, fewer than five, Flores’ 156 yards on the ground was impressive to watch. Junior quarterback, Conner Cordts added onto Flores’ impressive performance by passing for another 224 yards. These two juniors certainly have taken #TraditionPart2 by storm and proves that the future of the Cobra football tradition is in good hands.

The Cobras hit the road to play Estrella Foothills this week as they look for a 3-0 start.

Ironwood’s Devante Wimbish still showed promise for the Eagles after a 233-total-yard performance. The Eagles can get back on track for a successful season when they host a 0-3 Camelback on Friday.

Unfortunately, there was too much action last week, so this week will be a bit smaller, but still packs plenty of excitement. Here are some notable games hosted in the west valley this Friday night. Be sure to head out and support your team, but don’t forget to use #FridayNight360AZ to join in on all the talk under the lights!