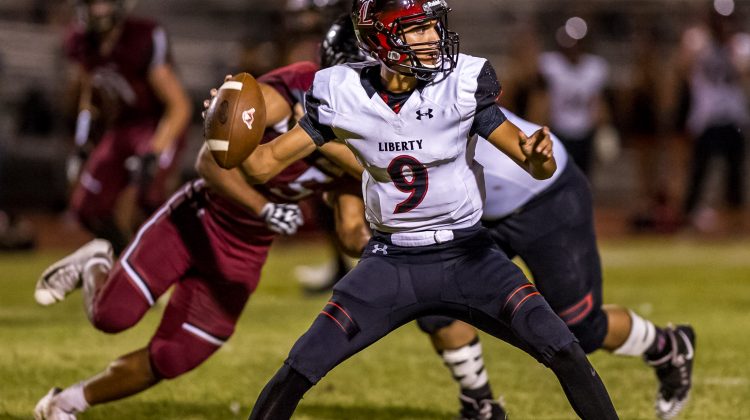 The west valley schools were scattered around the state last week mostly on the road, and after some big wins, there are a boatload of great games on the west side this week!

Most games aren’t won by an over-snapped ball getting picked back up and ran in for a touchdown in the wildcat formation. Jace Accurso and Liberty’s second-half march to remain undefeated in the 6A Conference was one of those few games. After being down 14-0 in the third quarter, the Lions marched back and took down Desert Ridge 21-14, sealed by a Ryan Puskas INT.

Jace Accurso turns in the play of the game for Liberty giving the Lions a 21-14 lead 4:51 left pic.twitter.com/y6XUHXyxtY

It’s been two exhilarating games in a row for Liberty, but this Friday’s is certainly the most meaningful. Actually, it might just be the biggest game of the year in Arizona.

For the first time ever, the alma mater of Arizona sports legend, Pat Tillman, will play in the state where Tillman created his legacy in college and professional football.

This will be Liberty’s first out-of-state opponent hosting Leland High from San Jose, CA. The Leland Chargers are coming off an 11-2 season where they went to their first section championship game since 1999.

The Chargers season opener didn’t go as planned when they fell to Los Gatos 35-9, but junior quarterback, Carson Yates got back on track against Freemont by racking up 301 total yards and five touchdowns in a 46-7 victory. The Chargers stand at 1-1 after a bye week.

Come join us Thursday night in support of the Pat Tillman Foundation. We would love the entire community join us in support ! pic.twitter.com/6ednA8lpvd

The spirit of Pat Tillman will be out at full force on a night celebrating all branches of the military and first responders. Leland will wear special “42” decals on their helmets to honor Pat Tillman and Liberty will have “PT 42” stickers for every helmet on the field.

Liberty will also host a 4.2-kilometer fun run on Thursday night with all proceeds benefiting the Pat Tillman Foundation.

“I think this is more than a game,” said Liberty Athletic Director, Aaron Coughanour. “It’s a great opportunity to play the school that Pat Tillman attended, and it is a chance to thank the people that served their country and community.”

For the first time, Pat Tillman’s alma mater @LelandAthletics will play in the state where Tillman made his college and pro legacy.@devonhenry77 tells the story on how the game came together and why this is one of the biggest games of the year.https://t.co/jbsJXzrHEE

When it comes to the spirit of Pat Tillman, Leland head coach, Mike Ward, believes there are several players that will be on the field Friday who exhibit the style of Tillman. “Matthew Ames, vocally from a leadership standpoint. As far as on the field talent wise, Carson Yates, our quarterback is a special talent.”

A term that is commonly used to describe the style of Pat Tillman is, “a reckless abandon.” Ward used that exact term to describe a couple of his top defenders.

“Preston Gook, Andrew Thorn, those guys run around, stick their nose in and hit. They just play with that controlled chaos of sorts.”

Liberty’s Ryan Puskas is another aggressive athlete who has had his playing style compared to Tillman as well.

Both offenses have displayed a mass amount of power, so it will be up to the defenses to stop this western shootout. Liberty’s junior quarterback, Jonah Guevara has racked up 519 passing yards over the past three games with a Lion offense scoring over 100 points. Meanwhile, the Charger’s junior QB, Carson Yates, has accumulated 494 total yards over two games and is responsible for six total touchdowns.

Expect a match that will feature a defensive emphasis trying to stop the opposing high-octane offenses and a night of fun that neither team will forget any time soon. You can go more in-depth with how this game came together, its significance, and the festivities with our story from earlier this week.

You know it was a good night under the lights when your senior receiver steps in and throws an 88-yard touchdown pass. Cobra, Zaach Cullop, became a triple-threat quarterback in Friday’s 32-19 win against Estrella Foothills by rushing for 44 yards, receiving for 43 yards, and tossing the ball for another 92 yards.

Joe Ortiz and the Cobras have rocked their first three games of the year averaging 37 points per game with obvious standouts. Cullop has been the favorite receiver all year, Anthony Flores made his name with a 4 TD game against Ironwood, and Nate Quinones has been solid defensively.

The Cobras’ perfect record is in jeopardy on Friday against Salpointe Catholic, a team that smothered Cactus in the state tournament last year on their way to the State Championship.

The Lancers have dominated all year, including a seven-point victory against west valley school, Desert Edge, and a huge 42-27 win last week against Texas school, Del Valle. Salpointe Catholic has a new quarterback, but the Lancers only threw 46 yards in their 49-14 pounding of Cactus last year. The Lancers dominated on the ground with Bijan Robinson running 130 yards in only 10 carries while accumulating 3 touchdowns.

VIDEO: According to Andrea Bighiani, football games are “matches” and onside kicks are “surprise kicks”. He’s been familiar with American football for about a month, but the Cactus kicker and Italian foreign exchange student is already helping the Cobras.https://t.co/Bw6hl9af6f pic.twitter.com/hPu2Umjjx4

If the Cobras want to compete with the 2017 4A State Runner-up’s, the defensive line must stop Robinson, who has already rushed for 764 yards and 10 TD’s this year. In case you were wondering, that’s only an average of 255 yards for three touchdowns per game.

The Coyotes have been nothing short of dominant this season, including their win over Bishop Gorman two weeks ago and at making pancake breakfasts (apparently). They trounced Cienega’s perfect record with a 35-0 shutout, and now they hit the road against a struggling Ironwood Ridge Nighthawks.

While the ‘pretty ones’ worked the front at the pancake breakfast fundraiser today.  The ‘Bigs’ took care of the business end!  But honestly ALL the COYOTES that worked today made it successful! pic.twitter.com/IXmvwIpBtn

Nevada transfer, Tawee Walker, has been an all-star on both sides of the line this season racking up eight touchdowns, 12 tackles, and a fumble recovery in only three games.

The Nighthawks have lost their last two games by four points or less and will need to tame the ‘Yotes offense just to have a chance. Junior quarterback, Jonathan Morris, is averaging over 200 total yards per game and isn’t slowing down.

Shout out to @MarkMcClune for hanging with the COYOTES tonight covering our win 35-0. pic.twitter.com/QuWvyy9APF

Centennial’s massive non-conference schedule closes with Ironwood Ridge followed by Millennium. If the Coyotes can go into regional play 5-0, there’s a good chance they could go undefeated this season.

Keeping Up with the ‘Stangs

A 1-2 record doesn’t do justice to the type of season the Sunrise Mountain Mustangs have had. Following a devastating, yet impressive, 49-43 loss to rival, Liberty, Sunrise Mountain got to recuperate with a bye week last Friday night.

Their next battle will be against a school turning their program around following a move down from 6A to 5A. The Gilbert Tiger’s Will Plumer and Anthony Elzy have led the offense to their 3-1 record, but they must face the task of keeping up with one of the most electric offenses on the west side.

Air Force commit, Keegan Freid, has thrown nine touchdowns to five different receivers while running in another two TD’s for 860 total yards in only three games.

FAST FACT: Sunrise Mountain QB Keegan Freid has thrown a TD pass in all 17 of his varsity starts.  With his 5 TD performance against Liberty last week, he now has 50 for his career.

Jay Anderson is Freid’s go-to receiver, but Nathan Duran has been the dagger catching four touchdown passes this year.

Expect Sunrise Mt. to get back on track before staying in the west valley for the rest of their first 5A season.

There are plenty of games to head out to this Friday night, and at least one big game in the 4A, 5A, and 6A Conferences. Be sure to head out and support your team, but don’t forget to use #FridayNight360AZ to join in on all the talk under the lights!