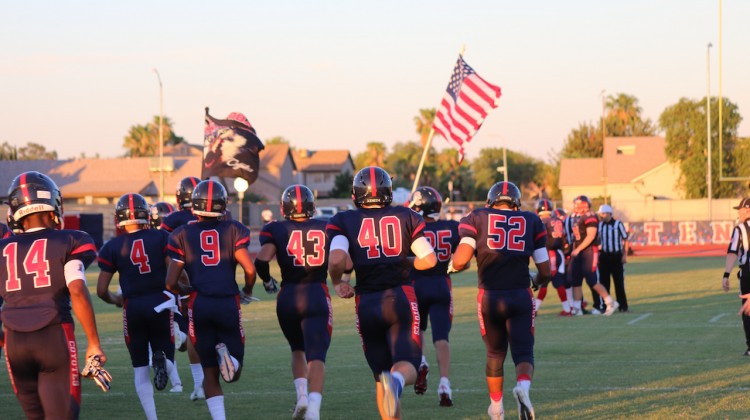 Well, it took an extra day due to monsoon storms in the desert, but all the west valley schools had the buzzer sound on at least one week of football! Let’s look ahead at your Week Two action on the west side and what you can look forward too.

West Valley Game of the Week:

It’s no surprise that our West Valley Game of the Week is the 5A defending champion, Centennial Coyotes, hosting the top-ranked team in Nevada, the Bishop Gorman Gaels.

The key of the game for the Coyotes: kick ‘em while they’re down. The Gaels’ first game of the year was televised on ESPNU and resulted in getting shutout for the first time in nearly 12 years. What happened the last time Centennial hosted a nationally ranked team? The Coyotes shut them out.

Senior transfer from Nevada, Tawee Walker, stole the show during Centennial’s Week Zero win against Casteel, running into the end zone three times and received for another six points as well. Junior quarterback, Jonathan Morris, added a dual threat on the offense by throwing for nearly 250 yards. The ‘Yotes will need both those weapons at full force to outgun Bishop Gorman.

First game tonight, not a thing of beauty, but a W. Lots to clean up, lots to work on.

The Centennial secondary will have to force the Gaels to run the football on Friday and take their chances on the ground. Centennial has had plenty of time to prep with an off week after their Week Zero win against Casteel. Regardless of what you’re doing Friday night, this will be a game to keep track of.

On a night where @CasteelFootball was looking to make a splash in their 5A debut, @tawee_3 stole the show as @Cehsfootball sent a BIG statement in the southeast Valley VIDEO: 🎥👀🏈 https://t.co/QfskLPM1Te #FridayNight360AZ pic.twitter.com/pJXJ03lzs0

Back-to-back shutouts? I guess that’s a pretty good way to kick off your first season in the 6A Conference. This is actually the first time the Lions have accomplished that feat in two years. It just so happens, that was the first season of a renewed Liberty vs Sunrise Mountain rivalry after a 3-year hiatus.

At the same time that Liberty was throwing a party in Copper Canyon’s end zones, Sunrise Mountain got their first dose of reality in the 5A conference with their tight 23-18 loss to Williams Field.

Even though the Mustangs scored their fewest points in a game since a 2016 loss to Saguaro, we got to see Keegan Freid, an Air Force commit, be productive against a solid 5A defense. Freid did a little bit of everything, passing for 231 yards and rushing for another 137. He is even credited with a 55-yard punt.

MAKE SURE TO GET YOUR LIBERTY SHIRTS NEXT WEEK! Only $10 at both lunches 💛💜 pic.twitter.com/SJ27wgfLlD

There’s a chance we could be watching a shootout come Friday night between these two schools, but it seems like the best way to stop Liberty is by stopping the Lion run game. Even though junior quarterback, Jonah Guevara has started to find his groove tossing the football, he’ll want to be careful slinging a ball towards a growing Mustang secondary.

And while seniors, Freid and Drake Flores, will continue pounding the turf, they’ll have to keep their helmets up and look out for a couple of California commits, Braxten Croteau and Ryan Puskas. If they don’t, the only thing those seniors will be thinking all night is, “where did he come from?”

Desert Edge has solidified two wins through 46 points scored and a shutout of Moon Valley on Friday. It’s been a smooth transition to the 4A Conference so far for the Scorpions, but they certainly have two games circled on their schedule to prove their dominance in the coming years.

Even though a visit to powerhouse, Saguaro on Sept 24 is their marquee matchup, they first have to prove their worth to Salpointe Catholic on Friday. Last year’s state runner-ups have already put a pounding on Dobson and will welcome the challenge that Desert Edge brings.

Ironwood might just be the real deal. Well, not by means of a championship hunt, but they already look much improved from last season. While Independence isn’t a contender, a shutout is something to be proud of, especially when your senior quarterback shows off dual-threat capability.

Devante Wimbish only completed 10 of 22 throws, but a couple of pass and rush touchdowns show an ability to control the offense.

Now that you’re already halfway to your win total from last season, what could be the best way to test the sturdiness of your offense? Head down to your top-notch 4A sister school, Cactus!

The Cobras have declared the Joe Ortiz era, #TraditionPart2. That tradition includes more involvement at the school by giving the off-week jerseys to campus staff and even group yoga sessions with the school dance program.

Pregame yoga before we head to Tucson! pic.twitter.com/KUlJNijpmb

The Cobras had to find a way to be extra nimble on Saturday after their matchup against Catalina Foothills got postponed at 9 p.m. Friday after lightning postponed the game prior to kickoff. The Cobras made their second 140-mile trip to Tucson for a 4 p.m. start on Saturday and took down the Falcons 36-12.

Wimbish will have to keep his eyes open in the pocket at all times on Friday when the Cactus d-line tries to tower over him.

There will be plenty of action on the west side this Friday night, with most of them being meaningful games. Be sure to head out and support your team, but don’t forget to use #FridayNight360AZ to join in on all the talk under the lights!