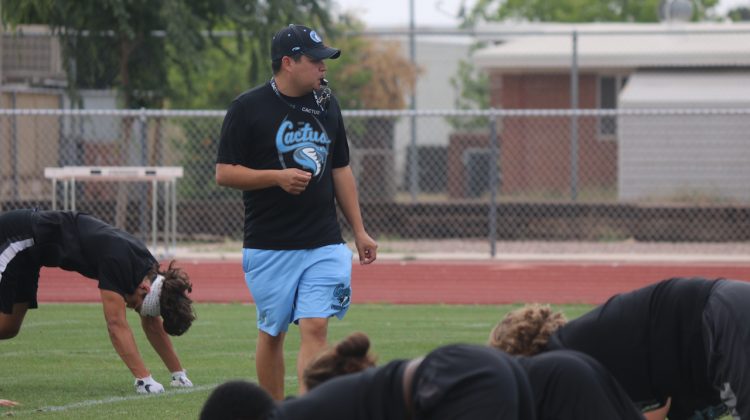 After the controversial resignation of 300-win coach, Larry Fetkenhier, Cactus fans became worried about the future of the Cobra Football program, which has only one losing season in over 30 years of competition under the legendary coach.

The new hire came from a familiar school who outscored Cactus by 88 points in their past three meetings. Former Higley Offensive Coordinator, Joe Ortiz, was hired in January to take over the helm of the Cobras. Ortiz is building new tradition at Cactus by constructing on the 30-plus years of foundation set by Fetkenhier.

This summer, the Cobras participated in 7-on-7 tournaments, get away camps, and group yoga sessions led by the Cactus dance program. Students and parents are beginning to buy into what Ortiz is building as the first Cactus head coach since 1983.

Like many high school and college football programs, Cactus will need to fill big holes in the offense and defense due to graduation. When the offense hikes their first snap at Catalina Foothills on Aug. 21, many eyes will be on junior quarterback, Conner Cordts. With only a few dozen snaps under his belt and seven attempted passes in his young career, he will not only be coming off of a leg injury, but he’ll be learning the new offense from Ortiz.

Peoria is a constant question mark in the 4A Conference having as many ups and downs as a rollercoaster over the past few years. Even with their perfect regular season in 2013, Peoria hasn’t made it past the second round of the state tournament in over a decade. With the return of offensive tackle, Jacob Golden, a Boise State commit, and electric running back, Juwaun Price, their offense can continue to thrive in the west valley.

Greenway and Moon Valley have both been moved from the West Valley to the Skyline Region. This is a region that once held juggernaut, Saguaro, and constant contender Cactus Shadows, but with those two realigned, the Skyline Region is wide open. The Demons and Rockets have been overshadowed by the Peoria schools of Cactus, Peoria, and Sunrise Mountain over the past graduating class, but this is a season where they can bring home a regional championship.

With the new realignment for 2018, two of the oldest west side schools, Cactus and Peoria, will be the only returners to the 4A West Valley Region. The five-team region will now include former 5A schools, Lake Havasu and Deer Valley, who finished with losing records last season.

The most notable addition to the region will be the 2015 5A State Champion, Desert Edge. The Scorpions were constant state tournament contenders in the 5A and will likely make noise this year in the 4A.

Defensively, they have seven of their top ten tacklers returning this season, led by linebacker Milton Rodgers, who talked to Jordan Hamm of Sports360AZ last week.

Winning three State Championships in four years is quite the feat, and 5A Centennial seems to be the favorite to make it four in five years. Head coach, Richard Taylor, is only four games shy of reaching the 300-win mark, which will without a doubt come this season.

Runnin’ with the ‘Yotes:

Centennial’s run game has been a major part of its success over the past few years, and that history will likely continue.

With last year’s huge upset over St. Thomas Aquinas, Centennial will meet another out of state powerhouse. Bishop Gorman, from Las Vegas, hauls to the house of the Coyotes on Aug. 31. St. Thomas Aquinas was ranked third in the nation last season before Centennial’s 12-0 win. This time around, Bishop Gorman comes in ranked as the best team in Nevada and eleventh best in the nation.

Bishop Gorman went 2-2 in their out of state games last season on their way to their 9th straight NIAA State Championship.

Trying to Spoil the Party:

Speaking of championships, Centennial obviously has a major target on its back in the 5A Conference. Their most competitive new face for the title is coming from only 5 miles away. Sister school and fellow Northwest Region team, Sunrise Mountain, moved to the 5A Conference after the realignment, and don’t be shocked if they’re a top seed in the state tournament this November.

After Chase Cord graduated and signed to play football at Boise State following the 2016 season, it was doubtful that Sunrise Mountain could continue its attempt to knock off 4A powerhouse, Saguaro. Quarterback and Air Force commit, Keegan Fried, took the helm with force, though, nearly beating Saguaro in the regular season. Fried would lead the team to the top seed in the 4A tournament in his junior year but was eliminated in the semifinals by Higley.

Both Ironwood and Raymond S. Kellis have moved into a Peoria filled 5A Northwest Region which includes Centennial and Sunrise Mountain with Sunnyslope and Apollo awkwardly third wheeling. Even after finishing 2-8 last season, don’t count Ironwood out of the 5A just yet.

Remarkably, this team has acquired a fair amount of transfers this past offseason. Sophomore quarterback Will Haskell, sophomore receivers Sebastian Fiery and Mehki Mannino-Faison, as well as two other players, have transferred to Ironwood from Deer Valley after an altercation took place near Deer Valley High School back in May.

A new young offensive core filled with talent could be what the Eagles need to get back in the swing of things and win some games this year.

The defending Desert West Region Champion, Verrado, are expected to go back-to-back with this 5A Region. The only other teams who finished over .500 have been moved to the 4A Conference and their replacements will be Millennium, Willow Canyon, and Independence, all teams that finished below .500 and didn’t make their state tournaments. Watch for them to make another state tournament appearance.

Westside Back to the Top:

For the first time since the AIA’s one-year stint with their 17-team Division I, Liberty will be in the top tier of Arizona High School Football. The Lions finished that season with their worst record in program history at 4-7 but still made the 16-team state tournament.

Being in the top conference not only brings new challengers in-state but also from out-of-state. A game that every high school football fan should mark on their calendars is when Leland (CA) visits the Lions on Sept. 14. Leland is the school that Arizona sports legend, Pat Tillman, graduated from before attending Arizona State and eventually the Arizona Cardinals.

This will be the first time that Leland visits Arizona since Pat Tillman began his story in Arizona in 1994. Leland will be coming off a 10-2 year in 2017 losing in their section championship game.

The Peoria schools always seem to be the stars of the west valley and since the AIA’s inception of six conferences or divisions in 2011, they not only have a school in each of the top three tiers, but they have a contender for each title.

Cactus and Peoria might not be the favorite for the 4A title against Saguaro, but they seem to be in the hunt every year. In the 5A Conference, not only do they have the defending champions, Centennial, but possibly the most competitive newcomer in Sunrise Mountain. While Liberty might not be the biggest or baddest in the 6A, don’t be surprised to see them in the tournament this year and competing for the crown in just a couple years.