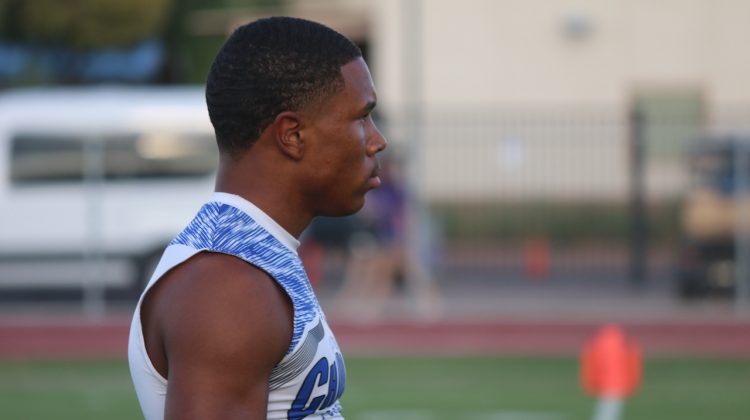 I was able to call play-by-play for the Chandler-Queen Creek game on Friday night. It was my first game back in over a year, and it was fun to get back behind the mic. It was also a good opportunity to check out two talented teams on the 6A level. Here are a few takeaways:

Last year, I found it amazing DeCarlos Brooks very quietly rushed for 1,300 yards last year with 14 touchdowns and seven 100+ yard games. Though, when thinking of the 2017 Chandler offense, he usually wasn’t the first guy brought up, a testament to how deep that group was.

Brooks certainly got his touches last year, but Drake Anderson was the team’s workhorse. This year, the Cal commit is going to do the same. Friday night, he tallied three touchdowns and over 200 rushing yards and mixed nicely with Jaheim Brown-Taylor, who brings his own set of skills to the field.

Chandler athlete Gunner Maldonado did something that no other player under Shaun Aguano has done in seven years: play on both sides of the football. Aguano has had the athletes to do so – Chase Lucas, who has proven himself as a Pac-12 defensive back, played running back for the Wolves, and tell me N’Keal Harry – part receiver, part X-men – wouldn’t have been a dominant linebacker in his prep days…

But Maldonado played wide receiver and defensive back against Queen Creek on Friday, catching two touchdowns and intercepting a pass while Queen Creek was driving. Shaun Aguano tabbed the junior as a guy to keep an eye on in 2018 when we talked to the head coach on AZ Audibles this offseason, and you can see why.

Devin Larsen has been a very good varsity quarterback for multiple years now. The Queen Creek signal-caller is at his best when he is in the pocket and has time to use his arm strength. This will be a key for Bulldog offense as they navigate their first season in 6A. They return two experienced offensive lineman in Dakota Banning and Kyle Sawyer and have a young but talented group surrounding them. I think they can be a player in 6A, but the offensive line needs to turn their potential into consistently strong play.

Friday was my first time getting to watch significant time of senior running back Dylan Borja. As a junior, he rushed for 1,300 rushing yards and nine touchdowns while catching an additional three touchdown passes. He’s already off to a strong start through two games with two rushing touchdowns and two receiving touchdowns. He brings multiple strengths to this offense and head coach Travis Schureman said Borja’s rushing ability helps open up the passing game. If he keeps it up, Borja can become a weapon in the air attack as well.

This is some groundbreaking analysis, but Chandler is really, really good. In my eyes, they are still the favorite in 6A, and just need to stay healthy and continue to iron out mental mistakes to make a deep playoff run. They have the athletes and the depth to go toe-to-toe with anyone in 6A.

Queen Creek belongs in 6A. Friday was a good litmus test to see where they stand. Believe me, that 49-21 score does not indicate how close this game was through the first three quarters. They have an established quarterback, rock solid running back, some tall receivers on the outside, and a tough defense. There’s a reason they are consistently notching double-digit wins, and they can take a lot from Friday night’s game to build upon.