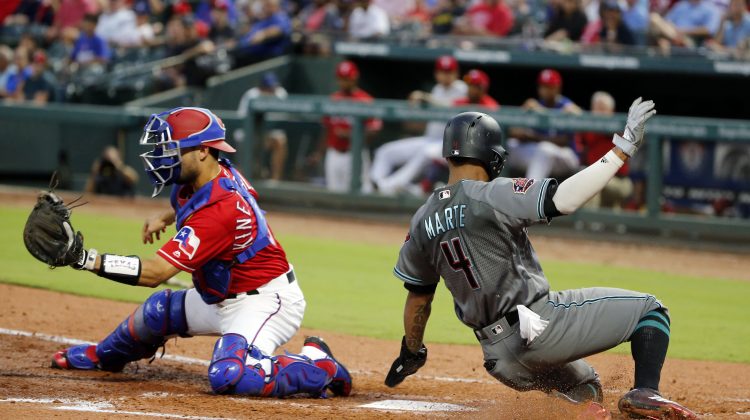 The Arizona Diamondbacks split a two-game series with the Texas Rangers on Tuesday. The D-backs are now 2-3 on this road trip as they head to San Diego for a four-game series.

The Diamondbacks scored runs in the first inning of both games in Arlington. They now lead the Majors with 98 first inning runs, ahead of the Indians with 88, Rockies with 85 and Mariners with 83, per the D-backs’ communications team.

As a designated hitter on Tuesday, Paul Goldschmidt got the scoring going with home run number 27 of the season in the first. It was Goldschmidt’s third career home run as a DH.

Goldy’s 3rd career homer as a DH was an absolute no-doubter. #GoldschmidtHappens pic.twitter.com/M6h3TAHynK

On the topic of Goldschmidt…America’s first baseman has now reached base safely in 21 straight games. It is his longest streak since his streak of 20 straight from Sept. 18, 2016-Apr. 9, 2017.

In that time, Goldschmidt is batting at .329 with six doubles, six home runs and 13 RBI.

On the road, Goldy has reached safely in 34 straight games, tying Conor Jackson for the second-longest streak in D-backs’ history.

Goldschmidt wasn’t the only one to homer in this two game series. Alex Avila hit a home run in the sixth on Tuesday to give the D-backs a comfortable lead late.

Avila 💪 up and tacks on another run for the @Dbacks. Oh, and he brings the 🌮🌮. pic.twitter.com/NHvWlliwIt

Also in these two games, the D-backs had five doubles. A.J. Pollock and Steven Souza Jr. doubled on Monday, while Ketel Marte, Daniel Descalso and Nick Ahmed all doubled on Tuesday.

Zack Greinke went 6 1/3 on Monday, but gave up a couple of home runs that ended up being costly in the 5-3 loss.

On Tuesday, Patrick Corbin went seven innings allowing three runs on six hits with seven strikeouts. The bullpen came on and took care of business as Corbin earned his tenth win of the year.

The D-backs got lucky this past weekend as the Rockies took two of three against the Dodgers to keep the NL West race tight, but to prevent the Dodgers from moving further ahead.

The Dodgers took on the Giants, who are five games back in a two-game set to start the week. The Giants took both games, making things happen late in the ninth inning to seal both victories.

Probable starters for the four-game set in San Diego against the Padres are Clay Buchholz on Thursday, Robbie Ray on Friday, Zack Godley on Saturday and Zack Greinke on Sunday.