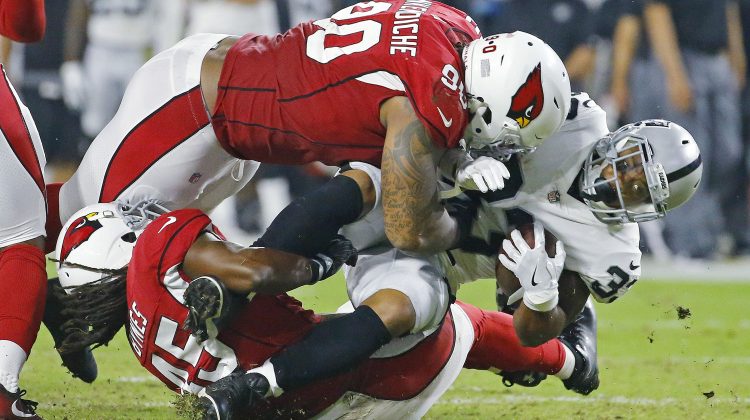 With a new year, comes new rules. Friday in Glendale the Arizona Cardinals got a tutorial on what to expect this fall as referee John Hussey and a group of NFL officials addressed the Cards’ organization on the dos and don’ts for the upcoming season.

The most talked about, and frequently debated, change is the helmet rule as the league continues to hone in on player safety on offense, defense and special teams.

“Out in the open or out in space I think the helmet rule is pretty clear,” Hussey said during his media briefing. “Lowering the helmet into the body or head of another opponent you are initiating contact with that. That is a foul. If we see it, we will call it.”

Referee John Hussey addressing the media here at #CardsCamp discussing the 2018 rule changes, including helmet-to-helmet contact, the catch rule and several others which will be enforced this season. #NFL pic.twitter.com/wTFTu85KQX

The helmet rule has been a hot topic this summer around the league, including the Cards’ locker room as they prepare to tweak their technique to avoid a flag and/or possible ejection.

Hussey also referenced multiple times the referees will use the pre-season as their “practice” as well in adjusting to the new rules and more flags may fly in August than during the regular season as all parties sort of work out the kinks.

“As a whole when you try to implement something across the league coaches and players understand that it’s going to be called,” head coach Steve Wilks said. “I could be an increase in those calls and hopefully during the season we don’t see a lot [of them] because we’re doing the right thing.”