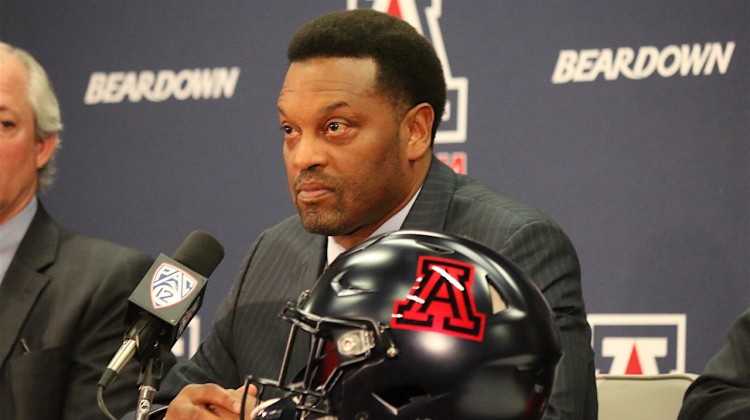 The Rich Rodriguez Era is over in Tucson. Enter new University of Arizona head coach Kevin Sumlin who has been on the job nearly seven months and is hoping to catch lightening in a bottle with most of Rich Rod’s former players who lost four of their last five to end 2017 7-6.

“I think the competitive fire clearly burns in Coach Sumlin,” ESPN College Football Insider Phil Steele said to Sports360AZ.com’s Brad Cesmat in a recent interview. “He’s not displeased with the talent he has inherited.”

Starting with junior Heisman Trophy candidate quarterback Khalil Tate who burst on the scene last fall tallying 29 touchdowns and over 3,000 total yards. The dual-threat signal-caller seemed to wear down near the end of the season but is expected to be a perfect fit in Sumlin’s up-tempo system.

“He’s a guy who has a lot of upside, he’s dynamic, he’s coachable,” Steele explained. “He wants to be the best player out there. He was the most dynamic player in college football in the month of October.”

Sumlin has the luxury of skill talent around Tate in wideouts Shun Brown and Shawn Poindexter, as well as returning running back J.J. Taylor who rushed for nearly 900 yards as a redshirt freshman.

Defensively the Cats took their lumps last year but appear to be more stable with a host young players gaining valuable experience.

“They’re solid at the linebacking core with Tony Fields and Colin Schooler,” Steele said. “The defensive backs I’ve ranked number 31 in the country. There is a good amount of talent on this Arizona team.”

Only time will tell, starting with a season-opening matchup against BYU September 1st at Arizona Stadium.