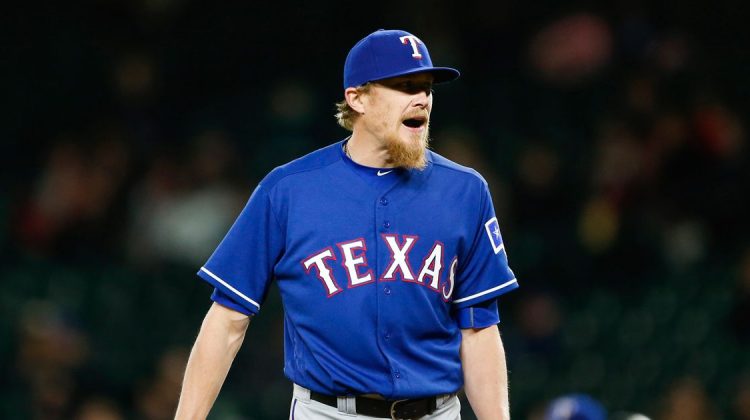 The Diamondbacks weren’t done dealing after re-acquiring Brad Ziegler from the Marlins this morning. With minutes until the deadline the D-backs acquired lefty reliever Jake Diekman from the Rangers.

Arizona will send pitcher Wei-Chieh Huang and a player to be named later to Texas in exchange. The Diamondbacks also designated Jorge De La Rosa for assignment to make room for Diekman.

In 47 games with the Rangers this season, Diekman has a 3.69 ERA. He is one of the top American League lefty relievers ranking third in holds with 14 and strikeouts with 48. Batters are hitting .215 off the lefty, fifth best in the AL among LHP relievers.

Diekman has held right handed batters to a .190 average this season and has allowed only two home runs.

Jake Diekman is the venom and the coil, the rattle and the subsequent violent lurch forward, away, and into the desert.

With Texas is in town for a two-game series, Diekman will only have to make the short walk down the hall to join his new club.

This is the second time in Diekman’s career he has been dealt at the trade deadline. In 2016, he was dealt to the Rangers from the Phillies with Cole Hamels, who was just traded as well before this year’s deadline to the Cubs.

Diekman and Ziegler will both be rentals for the D-backs’ bullpen in 2018 as both players will be free agents at the end of the season. Diekman fills a need for another lefty reliever, while Ziegler adds more late inning depth.

D-backs’ GM Mike Hazen will meet with the media at 2:45 MST to discuss today’s acquisitions.