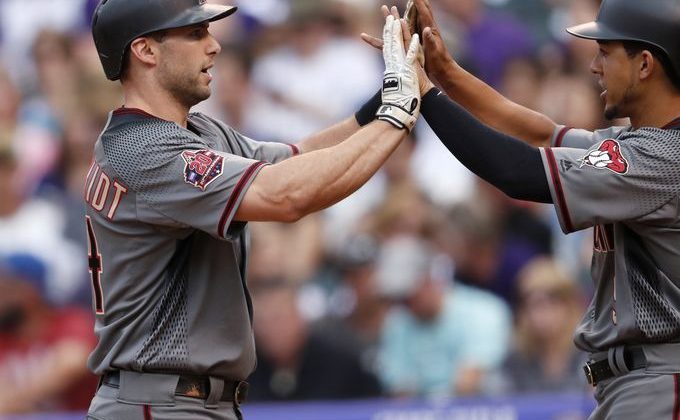 With a sweep of the Rockies, the Diamondbacks still sit atop the NL West. An offensive weekend led by Paul Goldschmidt helped the D-backs to three impressive wins against their NL West rivals.

On Saturday, Paul Goldschmidt had his second-consecutive two-home run game against the Rockies.

To say Paul Goldschmidt is in the zone right now would be an understatement. #GenerationDbacks pic.twitter.com/wSHs8H6qzF

The first baseman now has 12 career 4 hit games, surpassing Luis Gonzalez’s 11. On Saturday, Goldschmidt set a team record with his fourth straight game of 3+ hits. Then, on Sunday, he became the first player in the divisional era (1969) with multiple extra base hit and RBIs in four straight games.

Sunday, Goldschmidt went 2 for 4 with a triple and a double and two RBIs.

In addition to Goldschmidt’s offensive outbreak, the rest of the Diamondbacks lineup got in on the fun throughout the weekend as well. The Diamondbacks totaled 21 extra base hits in the series.

Jake Lamb and David Peralta both had homers on Friday, while Nick Ahmed added on to Goldschmidt’s second two-homer game on Saturday with a solo shot of his own. On Sunday, Ketel Marte had the Diamondbacks’ lone homer in the finale.

Ahmed, Peralta, Owings, Marte and Descalso all tallied doubles on the weekend, while Jeff Mathis also had a triple.

Matt Koch went five innings on Saturday. He allowed seven runs, five earned on eight hits, including three home runs, but the D-backs offense was there to pick up.

A look at the NL West

The NL West is the most intriguing division in baseball right now. After the sweep, the Rockies now find themselves three and half games back from the Diamondbacks, with the Dodgers and the Giants two and half games back, and the Padres five and half games back. When you take a look at other divisions around the League, the differential between the five teams in each division looks nothing like what the NL West does currently.

The Diamondbacks will return to Chase Field to host the Pirates this week. Probable starters are Patrick Corbin on Monday, Clay Buchholz on Tuesday and Zack Greinke on Wednesday.