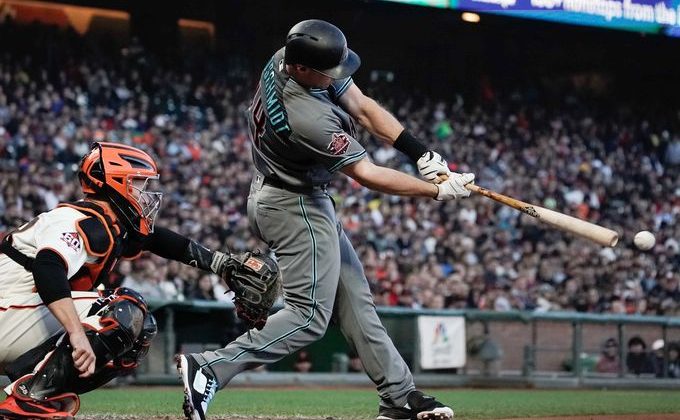 Despite Paul Goldschmidt having a breakout series and solid starts from Patrick Corbin and Clay Buchholz, the D-backs couldn’t get it done as the Giants got the walk-off win in extras in the finale to take the series.

In this series against the Giants, Goldschmidt went 8 for 12 with four doubles total.

On Tuesday, Goldschmidt continued to be a force for Giants’ pitcher Madison Bumgarner. Bumgarner made his first start of 2018. Goldschmidt went 3 for 4 with a double against Bumgarner, then erupted on Wednesday going 4 for 4 with three doubles.

Paul Goldschmidt doubles off the wall in center to drive home Jarrod Dyson. Dbacks back in front 3-2. That's Goldschmidt's third hit of the day and seventh hit in this series. Maybe he likes facing the Giants.

Patrick Corbin pitched extremely well on Tuesday. Corbin retired the first 11 batters he faced before giving up a single to Giants’ right fielder Andrew McCutchen in the fourth inning.

Then in the fifth inning, Corbin allowed back-to-back doubles, a single and a walk. With the bases loaded, Corbin struck out the side to get out of the jam.

Corbin went six and a third allowing one run on four hits with seven strikeouts.

In the ninth, Brad Boxberger came on. With two outs, one on, pinch hitter Alen Hanson came up and hit a shot to the Bay to tie the game and force extras. Boxberger’s second blown save of the year.

Andrew Chafin pitched in the tenth giving up the two out walk-off RBI single by Giants’ Brandon Crawford.

In Monday’s series opener, Zack Godley only lasted three and a third before the bullpen took over. Godley gave up seven runs on five hits, including two home runs.

The Diamondbacks will have an off day on Thursday before heading to Coors Field to take on the Rockies. Probable starters for the weekend are Zack Greinke on Friday, Matt Koch on Saturday and Zack Godley on Sunday. The Rockies are one game back from the Diamondbacks atop the NL West.