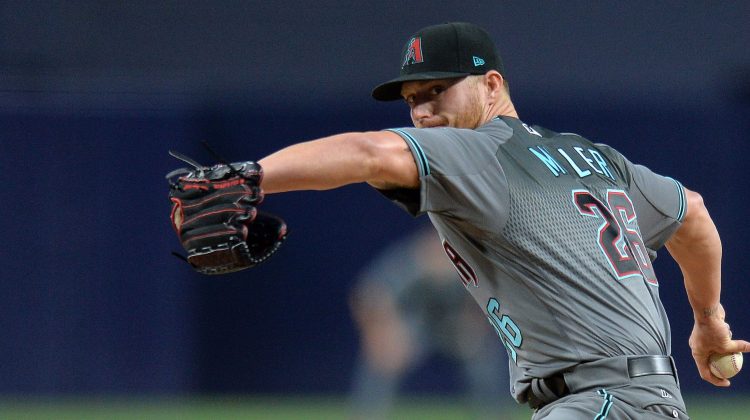 On Monday night in Miami, Diamondbacks’ pitcher Shelby Miller made his long awaited return to the mound after having Tommy John surgery on his right elbow in May 2017.

Miller’s last start was on April 23, 2017, where he left the game after four innings with right forearm tightness. Initially, Miller was not concerned saying his arm just felt tight, but after an MRI and evaluations by two of the League’s top doctors, Miller opted for surgery.

In his first start in 14 months, Miller went 3 2/3 allowing three runs on six hits, one home run, while walking two and striking out five. He threw 85 pitches, 52 for strikes.

Miller’s velocity was good, his command was spotty, but all-in-all the start was a step in the right direction to getting back into it.

“It was so good to be back” Miller told the media gathered in Miami. “I felt really good for most of the game. I think my command could have been a little bit better, but overall, I think the results don’t play out as good as I pitched.”

Miller said he’s feeling the best he’s felt. He had eight days rest prior to the start which he thinks helps how great he feels.

Shelby Miller's first pitch back from Tommy John surgery is a 95 mph fastball down and away for a ball.

Manager Torey Lovullo said in his postgame availability in Miami that he was happy with Miller’s first game back and thought Miller managed the emotion of his return well.

“He did everything we asked him to do and despite the fact that he didn’t walk off the mound with a chance to win the game, he should feel good about this,” Lovullo said. “I thought he was commanding his fastball and doing a really good job down in the zone with it. The secondary stuff probably wasn’t as consistent as he wanted it. I think they were waiting for certain pitches in certain zones and ran into a little trouble.”

The Diamondbacks have three more games in Miami against the Marlins this week. Robbie Ray will be getting the start on Wednesday, making a return of his own from a strained right oblique he sustained in April.

Keep it on Sports360AZ.com for more Diamondbacks news and notes.