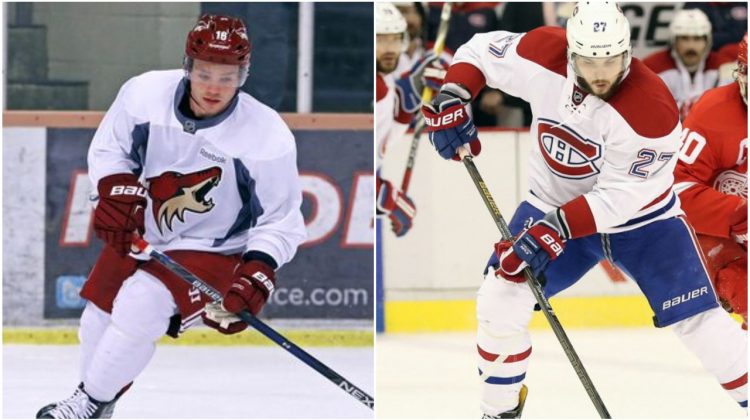 The Arizona Coyotes announced on Friday evening they have acquired forward Alex Galchenyuk from the Montreal Canadiens in exchange for Max Domi.

“As we’ve gotten through the offseason and kind of looked at areas that we needed to continue to improve upon, we were looking for an age group (and an) experience level, but still maintaining a player that can continue to grow with our young core of players here,” Coyotes General Manager John Chayka said. “We were looking for a guy that can score some goals for us (and) someone that had some versatility, had some experience playing up the middle.”

Domi was selected by the Coyotes with the 12th overall pick in the 2013 NHL Draft. In 222 career games with Arizona he had 36 goals, 99 assists totaling 135 points.

GM Chayka: “Max is a talented player and a good person. Montreal will provide him with a fresh start. We wish him all the best in the future.”

Chayka said that the Coyotes like the versatility that Galchenyuk brings, specifically with his ability to potentially play at center.

“I think having depth at that position (center) and having players that can play that position is something that we desired in this trade,” Chayka said. “I think he’s had success playing in the center position. It’s going to be the coaches’ call of his lineup and the roster, but I don’t think we’d make this trade if we didn’t think he had the ability to play center.”

The Coyotes have made a couple of other trades in this past week, in addition to today’s.

On June 14, the club acquired forward Hudson Fasching from the Buffalo Sabres in exchange for forward Mike Sislo and defenseman Brandon Hickey. Three hours later, the club announced another trade with the San Jose Sharks where they traded defenseman Kyle Wood for forward Adam Helewka.

Arizona will have the No. 5 pick in this year’s NHL Draft on June 22.