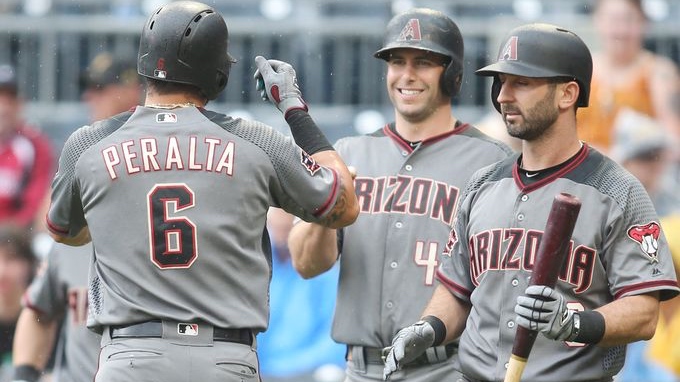 The Arizona Diamondbacks made their way to Pittsburgh and had to battle the Pirates, and the weather, but came away with a four game sweep:

The Diamondbacks starters were hitting on all cylinders with Zack Godley, Zack Greinke, Patrick Corbin and Clay Buchholz combining for the following:

Buchholz, who had thrown 53 pitchers through five innings, was pulled due to “left side tightness.”

Marte went 3/14 in the series, but when he got on base, he found ways to score with three runs notched in the series. He also knocked in three runs, and was involved in both runs scored by the Diamondbacks in Friday’s extra innings win. He hit a chopper that led to a two-base error in the 11th inning to bring in Jake Lamb and then knocked in the go-ahead run in the 13th to take the win.

Some things are bigger than baseball. Pirates starter Trevor Williams was a top ASU pitcher, and his best friend is Diamondbacks coordinator of pro scouting Cory Hahn. Hahn was teammates with Williams in Tempe and tragically was paralyzed from the chest down after sliding head first into second base in his third collegiate game. Together, they formed Project 34, a foundation that helps provide financial support for people with spinal cord injuries. The program launched on Friday with a benefit day at PNC Park.

The Diamondbacks head to Miami for a four-game series. Shelby Miller will make his debut on Monday after Tommy John surgery, along with Zack Godley, Patrick Corbin and Zack Greinke also making starts.