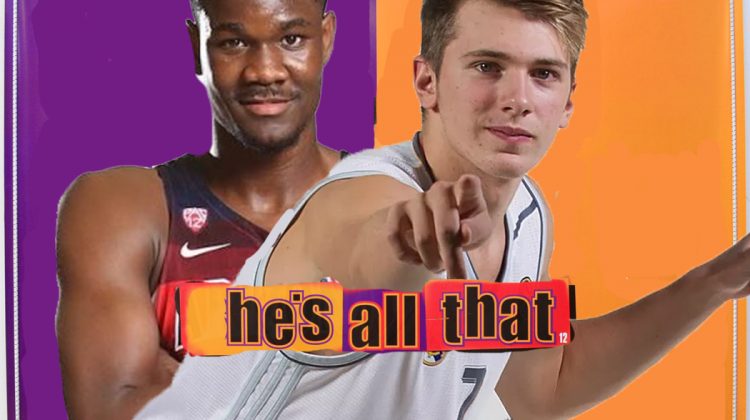 When it comes to Deandre Ayton and Luka Doncic I’m basically like a prom royalty voter in the movie She’s All That deciding between the favorite, well-known and physically gifted Taylor Vaughan (Ayton) and the underdog yet naturally beautiful Laney Boggs (Doncic). Both have their undeniable and amazing attributes that have left me completely undecided when it comes to who I want the Suns to select. (I know, exactly what you wanted, a column that’s riding the fence.)

That said there are two things that I’m definitely sure of. The center position isn’t dead and you don’t disqualify a player because he was born, grew up and started his professional career in Europe. These are just two narratives that lazy people use when they don’t want to find true reasons the Suns shouldn’t draft one over the other.

The idea that the center position will never be a dominant one in the NBA again after Golden State is about as ludicrous as the fact that the Warriors have three of the greatest shooters of all-time on one team, or the plot to any Fast and the Furious film. Yes, the last five years have seen teams without dominant big men in the Finals, and in a traditional sense, centers haven’t been in the MVP discussion either, but it is asinine — yeah, you read that right — to think this is a long-term trend rather than a short-term aberration.

The “Look at the teams in the conference finals this year; none of them have a true big” argument against drafting Ayton is short-sighted. Take a look at the larger picture, and you realize many of the up-and-coming teams that will be fighting for titles in the next five to 10 seasons have ultra-talented centers. Philly has Joel Embiid, Denver has Nikola Jokic, Utah has Rudy Gobert, Minnesota has Karl Anthony Towns, the Knicks have Kristaps Porzingis and the Thunder have Steve Adams.

Do you really believe if you dropped a “young Hakeem Olajuwon,” or “David Robinson with a 3-pointer” — how many are describing Ayton — into the league, that teams wouldn’t have to adjust their ‘small ball’ lineups to combat that? Smaller lineups are only ‘lineups of death’ because the opponent’s big men aren’t skilled enough to dominate on the offensive end. All signs point to the University of Arizona product being phenomenal on the offensive end, and being an impressive enough physical specimen to learn on the defensive end. When a generational talent at center emerges again, the league will take notice and the pendulum will swing back the other way. I’d argue that if Kevin Durant had been the bust and Greg Oden the star we would have never seen this era occur, as every team would have been searching for bigs to counter the Blazers’ star.

And for those of you in the “Doncic is just another amazing European bust” camp, it’s time to stop being NBA xenophobic. Past performance don’t always indicate future results. What Georgi Gluchov (Google him, Chuck), Darko Miličić, Andre Bargnani and others did, or didn’t do, in the Association has absolutely no impact on what Doncic is capable of doing. Those guys didn’t dominate Eurobasket at the age of 19, they didn’t show the maturity or passion that this young Slovenian did, and you can’t compare plodding big men to talented wings. For every bust there is a Dirk Nowitzki, Goran Dragic, Drazen Petrovic, Rik Smits, Detlef Schrempf, Giannis Antetokounmpo, Marc Gasol or Tony Parker. My guess is if you did the math, which I’m not going to do, you’d find that the percentage of American draft busts would be pretty close to the number of European busts.

There are plenty of reasons to want to draft Deandre Ayton or Luka Doncic, and you can bet the farm on the fact that every member of the Suns front office over the next four weeks will debate each and every one of them. That said, the center position being irrelevant and the unearned reputation of European hoopers are two areas that shouldn’t be of concern.

Draft Night will come down to the merit of both Ayton and Doncic’s game. And who knows, maybe Igor Kokoskov will play the Freddy Prinze Jr. in this situation and turn whoever they draft into the prom queen the team so desperately needs.