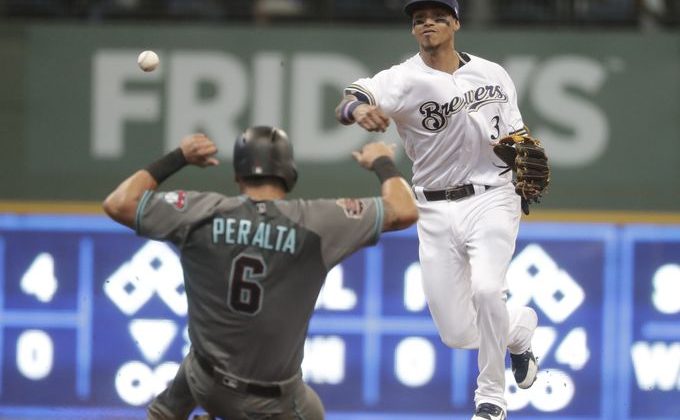 The Arizona Diamondbacks have seen more than their fair share of struggles lately. On Wednesday, the D-backs were swept by the Brewers at Miller Park for the second time in team history. They have now been swept in back-to-back series, lost seven straight, 13 of their last 14. It’s one of the worst stretches Arizona has had in franchise history.

The Diamondbacks were shut out for the first time in this rough stretch by the Brewers in Tuesday’s loss.

On Wednesday, it looked like the Diamondbacks’ were going to bounce back early, with back-to-back homers from Paul Goldschmidt and John Ryan Murphy, but the Brewers were able to put up seven runs in the fourth inning to open up a large lead that the Diamondbacks couldn’t come back from.

Hard to believe the #Diamondbacks are about to lose 13 of their last 14 games. They have scored the fewest runs in baseball in May. #MLBWhiparound

The Diamondbacks have only scored 26 runs since the struggles started on May 9. Opponents have put up 61 runs on the D-backs in that stretch.

Zack Godley pitched one of the shortest outings of his career on Wednesday. Godley went only 3 1/3 innings and allowed eight runs, six earned, on seven hits. He had six walks and three strikeouts.

Matt Koch had a good outing on Tuesday, but with the bats quiet and base-running struggles, he couldn’t get the win. Koch went 5 1/3 innings allowing one run on three hits with five strikeouts.

Trouble on the bases

In Tuesday’s loss, the Diamondbacks had four outs on the bases, all of which runners were caught trying to get from first to second.

#Dbacks 1B coach Dave McKay on the team's base running pic.twitter.com/xz5CPrXS7h

Souza Jr. back to DL

Souza is the second outfielder to go down in the last week after AJ Pollock sustained an avulsion fracture in his left thumb on May 14. Chris Owings and Jarrod Dyson have been splitting time in center in Pollock’s absence.

The Diamondbacks will have an off-day on Thursday before they head to Oakland for a weekend series against the Athletics. The weekend’s probable starters are Patrick Corbin on Friday, Clay Buchholz on Saturday and Zack Greinke on Sunday.

Fox Sports Arizona’s Jody Jackson reported on Wednesday that the team will be wearing black for their travel day from Milwaukee to Oakland. The theme will signify the “funeral” for the struggles the Diamondbacks have been having. They’ll be desperately looking to turn things around on this trip to Oakland, the D-backs first trip back to the Coliseum since 2011.

For more on the Diamondbacks, check out Sports360AZ.com’s ‘Diamonds in the Desert’ Podcast.