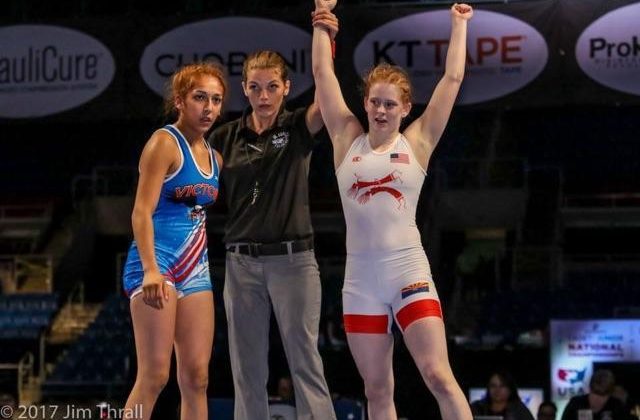 The first step to wrestling becoming a full fledge sport in Arizona took place this week when the Arizona Interscholastic Association approved it as a pilot sport starting in 2018-19.

The AIA Executive Board approved wrestling as an emerging sport for next school year. Girls can continue to compete on the boys team, but also will have opportunities to compete in girls only invitationals or jamborees.

As a pilot sport, girls wrestling will get a chance to grow for a few years before officially becoming an AIA sponsored sport. The AIA did the same thing with sand volleyball for girls in the spring of 2012 and this past season was the first year it was recognized fully as a sport.

“This is a positive move for the AIA and for all the female wrestlers throughout the state. It’s another opportunity for student-athletes to compete, which will also help the sport grow,” said AIA Executive Director David Hines said in a release. “Girls wrestling is also becoming an emerging sport at the NCAA level, which means there will be scholarship opportunities.”

It will start with modified rules, focused mostly on takedowns, and little mat wrestling involved unless the takedown goes straight to a pinning combination. The thought is the sport in Arizona will eventually adopt freestyle rules.

According to USA Wrestling, girls high school wrestling has grown for 27 straight years.

Arizona has seen a similar rise and now that the AIA is giving the sport a chance to grow it should do just that.

“I believe once it gets fully announced it will grow exponentially, and hopefully we can transition it into their own season,” said Gonzales, who hopes to hold the season in the spring so the dual meets, events can stand on their own.

For now, events like the Flowing Wells Invitational will hold them at the same time as the boys event. It’s a good sign when the state’s top has already embraced the movement.

“It’s time to show support for the girls and time for Arizona to take on the challenge of giving them a better opportunity and fair shake to compete,” Flowing Wells AD and tournament director Pat Weber said. “Until we take that first step it will never get going. We have a girl (Danielle Ramirez for Emmanuel Christian College) wrestling in college so the opportunities are there.”

Weber, who said he might reach out to some of the Texas schools about participating, said the plan is to have the girls tournament a one-day event in a separate gym, but to have the finals held in the main gym at the same time as the boys finals.

The state has already seen much success behind the girls already competing around the nation.

Mesa Mountain View’s Stefana Jelacic, who won a Cadet national title and competed in Peru for the Pan-Am Games, and Liberty’s Brooke Logan, who competed for the Team USA Cadet squad in Sweden in 2017, have been the thriving nationally and internationally.

It doesn’t top there as a group of younger girls recently traveled to Irving, Texas for the USAW Women’s Freestyle Nationals

Arizona came back with two individual champions in Karlee Brooks and Andee Anderson to help Arizona to the team title in the Novice age (11-12) group while the schoolgirl division (13-14) team took fifth.

The future is in good hands, and now there will be a place for them at the state high school level.

“I’ve always thought it would happen someday,” Jelacic said. “Wrestling boys is hard. I’m not going to shy away from competition, but they are naturally stronger. A match is a match so I’ll wrestle whoever, but now there is a place for girls wrestling in Arizona.

“It’s means a lot to us. We know we can compete against other girls so that will bring more girls out. I can’t wait for a dual (meet) when both lineups are full and we are competing against each other or a state meet with a full bracket. It’s going to happen, maybe not the first year or two, but it’s real going to take off now.”