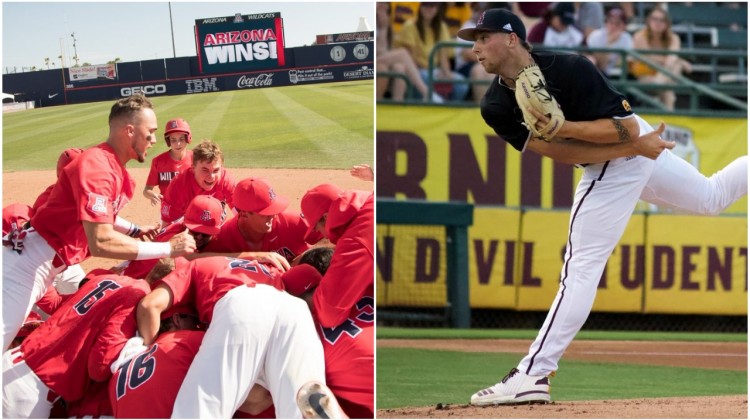 Here on Sports360AZ.com, Pac-12 at the Plate is the place to keep up with how ASU and Arizona baseball are stacking up in the conference.

This week ASU travels to No. 2 Stanford, while Arizona heads to USC. Here’s what you need to know ahead of the action this weekend:

Arizona enters this week on a high after getting the series win against then No. 4 ranked Oregon State. After a loss on Friday, the Wildcats came out and got the win on Saturday. Then in the rubber match on Sunday, junior outfielder Alfonso Rivas had the walk-off single for the series upset.

The series win was the first regular-season series victory against a Top 5 team since Arizona swept No. 2 Stanford in 2012.

HIGHLIGHTS: That Hi Corbett Magic struck again this afternoon and the Cats took the series from No. 4 Oregon State!#BearDown | #MLBTrainingGround pic.twitter.com/utsVcgldus

On Tuesday, Arizona traveled to Phoenix to take on GCU in a midweek matchup. The Cats topped the Lopes 16-1.

Senior RHP Juan Aguilera got the win on Tuesday improving to 4-0. Aguilera now has a 1.54 ERA in 23.1 innings.

Next up for Arizona is USC. The Trojans got the series win against ASU last weekend, but have struggled in conference play. USC has a 5-7 record in the Pac-12.

Since being swept by Washington in the first weekend of Pac-12 play the Wildcats have won 10 of 12 games. With the pitching staff’s consistency and the bats getting into a rhythm, things are clicking at just the right time for Arizona.

The Sun Devils have now lost five of their last six games. Despite opening last weekend’s series with a win behind a strong outing from sophomore RHP Alec Marsh, ASU dropped both Saturday and Sunday’s games against USC.

On Tuesday, ASU dropped the midweek matchup against UNLV 14-6.

Freshman first baseman Spencer Torkelson leads the nation in home runs with 16 after his leadoff bomb against UNLV on Tuesday. Torkelson was named to the USA Baseball Golden Spikes Player of the Year Midseason Watch List along with junior outfielder Gage Canning.

In the first game of his career batting leadoff, @spennyt19 launches a #TorkBomb to left field and just list that – ASU is up 1-0 at UNLV. pic.twitter.com/iGMHaVVG2o

The schedule isn’t going to get any easier for the Sun Devils heading into the second half of the season. This weekend ASU will take on No. 2 Stanford. The Cardinal has one of the best pitching staffs in the country and you can expect to see that give the Sun Devils some trouble.

Last weekend, UCLA’s pitching staff out performed Stanford as they got the series win. Two weeks ago, Utah topped then No. 1 Oregon State. They dropped the series against Cal last weekend, but as it has been proven by the Utes don’t count them out against a top ranked conference team.

Cal has now won two consecutive Pac-12 series, against UCLA and Utah. The Golden Bears will look to continue that streak against the Cougars this weekend. Washington State finds itself at the bottom of the Pac with a 4-8 conference record after a series loss to Oregon last weekend.

Washington lost last weekend’s series against No. 7 East Carolina 1-2. This week they play a midweek series against Gonzaga before taking on Oregon. The Huskies won Tuesday night’s matchup 5-3. Washington finds itself towards the top of the Pac thanks to a conference opening series sweep against Arizona, while Oregon is looking to improve their 5-7 conference record.