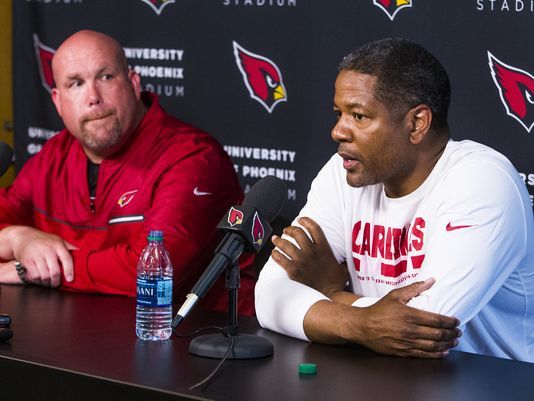 As the NFL draft quickly approaches, so to do the rumors and speculation regarding what the Arizona Cardinals may do, or attempt to do, with their first-round pick Thursday night.

The Cards, who presently sit with the 15th overall pick, have made it no secret they covet one of the elite quarterback prospects in this class. Clearly, general manager Steve Keim and first-year head coach Steve Wilks aren’t tipping their hand.

#AZCardinals GM Steve Keim, HC Steve Wilks say they have been in-sync with one another leading up to their first #NFLDraft together next week. #BirdGang #NFL pic.twitter.com/bW0Mlk2djs

They understand the price to move into the top five would be steep, possibly too steep.

“They have to start developing a quarterback, they have to do that,” NFL Network Insider/Analyst Steve Wyche said to Sports360AZ.com’s Brad Cesmat. “[Sam] Bradford you cannot rely upon. I speak to people up in Minnesota and they say his knees are just not good.”

Wyche ultimately believes the Cardinals will stay at 15, unless a quarterback they like begins to slide closer to their slot, and could go a number of directions to fill needs as the team transitions into a new era under Wilks.

“When you hear over and over from the [Cardinals], ‘length and speed’ are two priorities of this draft,” Wyche explained to Cesmat after visiting with team officials last week in Tempe. “If you look at Steve Wilks’ background, it is on defense even though in Carolina they didn’t necessarily value cornerbacks with high picks. If there’s one there at the top of their board, I think that’s where they go.”

Other options could be a wide receiver to pair with Larry Fitzgerald or an offensive lineman, a position decimated by injuries in 2017.

Wyche believes the Cards will definitely draft a quarterback, likely sooner than later if they don’t trade up in the first round.

“I think you’re probably looking second or third-round,” Wyche said when asked when asked about the position in relation to the Cards in this draft. “The name you hear in NFL circles is popular in the mid-rounds is Kyle Lauletta from Richmond who played well in some bowl games.”

Arizona did have Heisman Trophy-winning quarterback Baker Mayfield from Oklahoma in to the team’s Tempe facility last week. It’s safe to say he could be a target if the Cards do weigh the options and decide to move up Thursday or in the coming days.