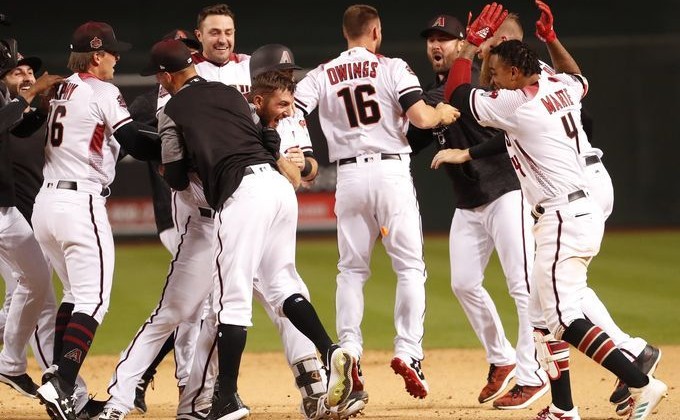 The Diamondbacks swept the Dodgers in the NL West rivals first meeting of 2018. Behind clutch hitting in the longest game in Chase Field history and strong outings from starting pitchers, the D-backs wrap their first homestand with a 5-1 record.

“For the six games that we played against two division rivals that were right in the thick of the race along with us for the entire year last year and advanced to the playoffs, I’m very proud of what happened,” D-backs’ manager Torey Lovullo said of the homestand.

Have a Day, Patrick Corbin

On Wednesday afternoon lefty Patrick Corbin took the bump for his second outing of the 2018 season. Corbin posted a career-high 12 strikeouts and only allowed one hit in his 7.1 innings pitched. Corbin also went 2-2 at the plate with a double and a single. He said post-game that plate performance was something he struggled with in 2017 and was looking to approve upon in 2018. Safe to say he’s off on the right track.

Patrick Corbin of the @Dbacks is the third player in the last 100 years with 12+ strikeouts as a pitcher and 2+ hits as a batter against the Dodgers, joining Dwight Gooden (6/4/1985) and Curt Schilling (8/22/1997). #GenerationDbacks pic.twitter.com/bxvWWHXCQP

“He came out and executed a tremendous game plan,” Lovullo said. “It was a day game after a night game where teams could be a little flat and he really took advantage of different situations and made pitches and kept a very offensive team off the scoreboard.”

Zack Godley and Taijuan Walker both had solid outings against the Dodgers as well. Walker went five innings allowing three runs on eight hits with four strikeouts and two walks.

Godley’s curveball and sinker got the best of the Dodger’s on Tuesday night. The Bull, as he is known, went seven innings allowing one run on four hits with three strikeouts and one walk.

Clutch hitting from Chris Owings and Jeff Mathis powered the D-backs to a 8-7 win in the longest game in Chase Field history on Monday night/Tuesday morning. Owings hit a three-run home run in the bottom of the ninth to even the score at six and force extras. Then in the 15th, Jeff Mathis hit the walk-off single for the win.

In addition to Owings’ and Mathis’ heroics, Ketel Marte had a night at the plate as well. Marte went 3-7 and had two triples in Monday’s win. The infielder is the ninth D-back to hit two triples in one regular season game.

The thrilling matchup lasted 5 hours and 45 minutes. The longest game before Monday’s was 5 hours and 32 minutes on June 24, 2015 against Cleveland.

In Tuesday’s 6-1 win, Daniel Descalso and David Peralta became the first pair of teammates to get home runs in the same game off of Dodgers’ ace Clayton Kershaw. Descalso went yard in the second inning, while Peralta’s home run came in the third.

Kershaw allowed two runs on four hits with six strikeouts in his six innings. He is now 0-2 on the year.

Daniel Descalso had just 2 hits in 14 previous at-bats against Kershaw. But he looked uber comfortable crushing this lefty-on-lefty solo HR to give the @Dbacks the lead. pic.twitter.com/Wvf5cDsJrV

In the seventh inning, the Dodgers walked in three runs to put the D-backs up 5-1, then in the eighth catcher John Ryan Murphy got his first home run as a Diamondback to solidify the win.

Jake Lamb was placed on the 10-day disabled list on Tuesday morning after suffering a sprained left AC joint in the late innings of Monday’s win.

The D-backs’ recalled Matt Koch from Triple-A Reno in a corresponding move. Koch has a 3.50 ERA in eight appearances, two starts, with the Diamondbacks.

The Diamondbacks now head to St. Louis for a three-game series. They will have an off day after Thursday’s matchup then will play Saturday and Sunday. The Cardinals lost their season opening series against the Mets and look to avoid another series loss against the Brewers on Wednesday night.