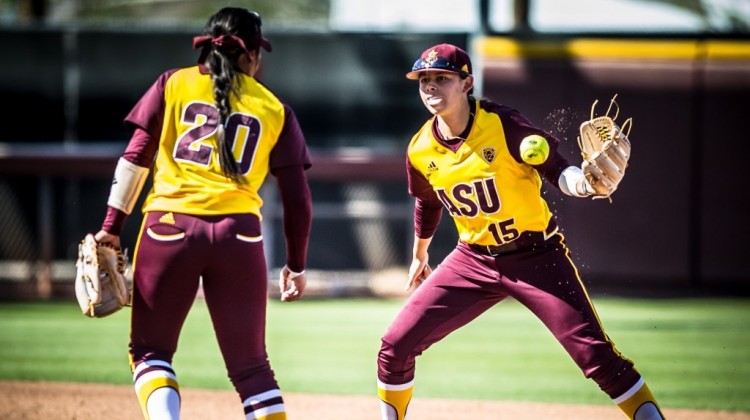 Ranked No. 7, Arizona State softball’s winning streak lives on after defeating BYU and NDSU in the double header series Friday and Saturday.

Now that the Sun Devils have won 31 games, this year will be the 23rd-straight season they’ve reached the 30-win mark.

7th in the Nation 😈 #ForksUp pic.twitter.com/cdFNHNEPkI

The Sun Devils started out strong, earning five runs in the first inning after NDSU had scored one to open the game. Sophomore Jade Gortarez got the momentum started with a single up the middle.

Gortarez homered to left in the second inning to combat another run from the Bison and the final two runs scored in the bottom of the fourth inning came from Gibson and McCarty’s singles and Stankiewicz’s double to right center.

The right-handed pitcher kept the Bison scoreless in the top of the fifth inning, ending the game early based on the run-rule. Macha struck out six in Friday’s 10-2 win against NDSU.

Sophomore Giselle “G” Juarez, the NFCA and USA Softball Division I National Pitcher of the Week, pitched yet another shutout, this time against BYU Friday afternoon.

The Cougars haven’t lost in a no-hitter game since March of 2016, and this game makes the 30th no-hitter in Sun Devil Softball history. Juarez has thrown 75 consecutive scoreless innings.

The lefty struck out back-to-back hitters right off the bat in the top of the first, followed by a fly out to shortstop.

The Sun Devils started out with small-ball. Right fielder Kindra Hackbarth singled up the middle and Gortarez executed a sacrifice bunt to move Hackbarth over to second base. Center fielder Morgan Howe singled to left center and one wild pitch and hit-by-pitch later, Hackbarth and Howe scored.

Juarez kept control on the mound, striking out back-to-back hitters once again in the top of the fifth inning.

Sophomore Briana Wise hit a solo home run for the Sun Devils to start the bottom of the fifth inning.

Seven hits and seven runs for the Sun Devil’s win against a scoreless BYU, and Juarez is credited with 11 strikeouts in this game alone.

Despite losing her no-hitter streak, Juarez still earned her 15th win of the season pitching against NDSU.

It was three up and three down, all strikeouts, for Juarez in the beginning of the inning but both teams remained scoreless for two innings.

Starting at the bottom of the lineup in the third inning, third baseman Taylor Becerra and the next three hitters all singled to score two runs. Gibson had an RBI double to center field and with Howe also on base, Stankiewicz took advantage with a three-run homer.

The Bison’s first baseman, Vanessa Anderson, ended Juarez’s no-hitter streak with a home run to right field in the top of the fifth inning, making the score 7-1 Sun Devils.

In the bottom of the fifth inning, Wise came in to pinch-hit for catcher Maddi Hackbarth and got on base from an error at third base. The error sparked the fire in the Sun Devil offense and two singles and a double put up two more runs.

Gibson and Stankiewicz went 2/2, and Stankiewicz had four RBIs and Gortarez with three. The three-time Pac-12 Pitcher of the Week had nine strikeouts and the Sun Devil offense had thirteen hits to earn a 9-1 victory against the Bison.

In the final game on Saturday, the Sun Devil pitching rotation called for sophomore Alyssa Loza to start it off against the BYU Cougars.

BYU was quick to score in the first inning after an error on the Arizona State defense and the Sun Devils remained scoreless until the bottom of the second inning.

Second baseman Bella Loomis walked, and Hackbarth and Becerra also followed with a walk to load the bases. Kindra Hackbarth hit a grand slam over the center field fence to give the Sun Devils a 4-1 lead.

Dale Ryndak went in to pitch for Loza and the Cougars earned another run when their second baseman, Briielle Breland, homered to left field to narrow ASU’s lead in the top of the third inning.

Loomis hit a 2 RBI double to left off of BYU’s pitcher Aria Paulson, scoring Stankiewicz and Gibson in the bottom half of the third inning.

Both teams didn’t score again until the fourth inning when Howe doubled to center to score Gortarez and Stankiewicz hit a 2-run homer to center, increasing the Sun Devil lead 9-2.

Congratulations to @marisa_stank and @ggotgame45 for earning @pac12 Player and Pitcher of the Week Honors! 😈 🔥 pic.twitter.com/sI5vTKzF16

BYU’s left fielder, Rylee Jensen, scored on a wild pitch in the fifth inning to add one more run for the Cougars.

The Devils weren’t done yet and for the second time, Stankiewicz homered again, putting ASU’s runs into the double digits.

Macha came in to close the last two innings, and Ryndak is credited with the 10-3 victory over the Cougars, holding a 1.34 ERA for the season.

Currently the top team in the Pac-12, Arizona State has a 5-1 conference record and will play an away series starting Friday against the Oregon State Beavers, ranked No. 6 with a 3-6 conference record.