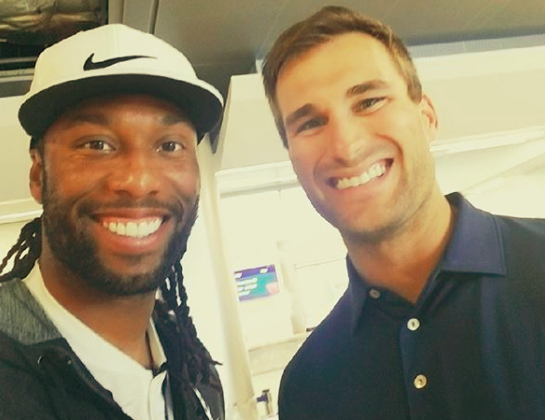 Larry Fitzgerald is cashing in on his frequent flyer miles. In the last month, we’ve seen Fitz travel from Scottsdale to Pebble Beach, S. Korea, Atlanta, and Durham, Carolina. Each of his stops have been related to sports in some sort of way. His Instagram photo with Kirk Cousins, set the social media world on fire over the weekend. The two crossed paths in the Atlanta airport. Cousins wrote that Fitz is a “GREAT recruiter.”

Congrats to @TeamUSA @usacurl on winning the gold medal at the #Olympics! I found out myself it’s not an easy sport. pic.twitter.com/T60zMaAPBk

Two weeks before the start of their USL regular season, Rising FC put on a good show this past week in Ecuador. http://

It would not surprise me in the least to see some Valley athletes start to kick the tires on buying in on Rising FC. A trend has started where pro players are looking at investing in the business of soccer…

Don’t be shocked when former Hamilton football coach Steve Belles’ name pops up for an assistant coaching position in the coming weeks. Former Brophy head coach Scooter Molander is available for a job too. Both could do other things in the interim, but at the end of the day they are coaches. Damn good ones…

Watched the quarterbacks throw at the NFL Combine on Saturday. Can’t cut these guys open to see what’s in their hearts. It’s the immeasurables that matter more than the spots and dots…

Former Hamilton and Arizona State wide receiver Kerry Taylor was named the head coach at Arcadia this past week. More than a few people believe that the Titans could be a sleeping giant. One valley coach suggested that Arcadia could be the new Chaparral…

It’s amazing how good Al McCoy can sound, doing a product that is so bad…,

Your hometown heroes of the hardwood won 64 games in 2009-10 season(including playoffs). That was the last year that the Suns made the postseason(Can’t forget the good times). With their win over Memphis this past week, the Suns have now collected 65 wins over the last three seasons COMBINED(18,24,23). Winning at Memphis may have been the worst victory over this brutal stretch. I can see getting one less ping pong ball, dropping them down to 4th and missing out on Ayton, Doncic, or Bagley.