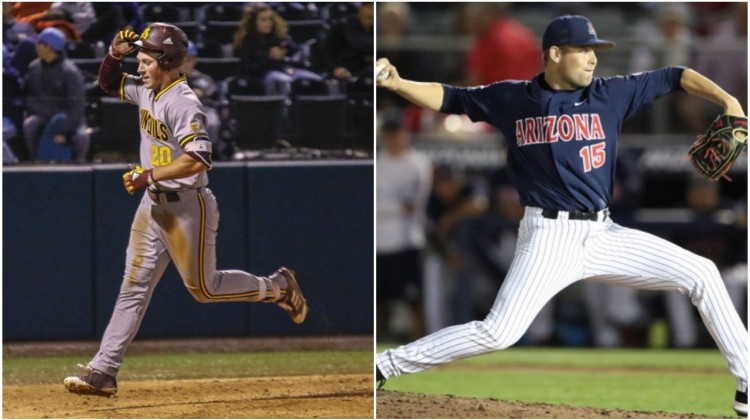 Here on Sports360AZ.com, Pac-12 at the Plate is the place to keep up with how ASU and Arizona baseball are stacking up in the conference.

This week ASU heads north to Washington State, while Arizona plays a non-conference series against Nicholls. Games will be Thursday-Saturday because of Easter. Here’s what you need to know ahead of the action this weekend:

MOVE OVER, @BarryBonds! You've got company!

Nothing about this is pretty, but @spennyt19 ties the GOAT's freshman home run record in Game 22 and ASU is on the board! pic.twitter.com/pFl7FrEPjj

The Sun Devils put up a fight on Friday, but fell 5-4 in 10 innings. Freshman RHP Brady Corrigan came on in the second after junior Sam Romero got tossed around in the first and early in the second. Corrigan went 5.2 innings only allowing one hit with five strikeouts.

The Sun Devils dropped the series 1-2 against the Bruins.

What to Watch: The big thing for ASU is figuring out the bullpen. On Saturday, head coach Tracy Smith went through five pitchers, each gave up at least one run. Junior Connor Higgins, who was the only Sun Devil drafted in 2017, hasn’t been producing early. Higgins has given up 11 runs, 10 earned on 16 hits in his 11.2 innings this season.

Look Ahead: This weekend ASU will take on Washington State in Pullman. The Cougars are 1-5 in Pac-12 play and 5-14 overall. Their one conference win came against Arizona on Saturday.

Johnson gets 100th win with Cats

Arizona head coach Jay Johnson won his 100th game with the Wildcats on Sunday. The Cats beat Washington State 9-2 to get their first Pac-12 series win so far this season.

The Wildcats’ pitching staff moved up to No. 6 in the country in team ERA with a 2.48. Senior reliever Juan Aguilera has a .50 ERA in 18 innings this season. Aguilera came on to relieve junior Avery Weems on Sunday after Weems gave up five runs on six hits in the first inning. Aguilera went five innings only allowing two hits with six strikeouts.

At the plate, second baseman Cameron Cannon went 10 for 17 last week. Cannon had two doubles, a triple and three RBIs in the series against the Cougars.

What to Watch: Consistency at the plate is still what the Cats are looking to completely solidify. Arizona couldn’t get things going on Saturday against Washington State after falling behind early in the game. Cesar Salazar went 3 for 5 on the night, but that wasn’t enough to get the Wildcats a win. In Sunday’s win, Arizona had 18 hits, which is what they will need more of as they get further into conference play.

Look Ahead: Arizona plays a non-conference series against Nicholls this weekend at Hi Corbett. The Colonels are 8-15 in 2018.

Stanford outscored USC 34-2 last weekend. The Cardinal improved to 17-2 on the year with the series win. After being swept by Arizona State to start Pac-12 play, Oregon took two of three against Cal. This weekend Oregon will be faced with the challenge of Stanford’s pitching. The Cardinal is first in the nation with a 2.06 team ERA, led by junior lefty Kris Bubic and freshman righty Brendan Beck.

Cal is looking to turn around the slow start they’ve had in conference play this weekend against UCLA. The Golden Bears opened Pac-12 play being swept by Oregon State, then last weekend dropped the series against Oregon 1-2. Cal’s strength is at the plate, the Bears are No. 15 in the country with a team batting average of .310. With as solid of a pitching staff as UCLA has, they could have more trouble if the bats don’t stay consistent this weekend.

Washington will look to carry a big win against No. 1 Oregon State into this series to keep things rolling in conference play. The Huskies swept Arizona to open Pac-12 play and now with a win against the best team in the country have solid momentum carrying them. Keep an eye on junior pitcher Joe Demers for Washington. Demers has 1.39 ERA in his 32.1 innings, good for 29th best in the country.

USC will look to get past a tough weekend against No. 3 Stanford this weekend, but they may have trouble against a Washington team that is heating up.

Oregon State lost their first Pac-12 game of the year on Sunday against Washington after they couldn’t overcome an early deficit. The Beavers still have the best record in the Pac at 20-2. OSU All-American shortstop Nick Madrigal is still out after breaking his wrist at the start of the season. Madrigal’s recovery is on schedule and he could return for the series against Arizona at Hi Corbett Apr. 6-8.

Utah has the worst overall record in the conference at 4-18.