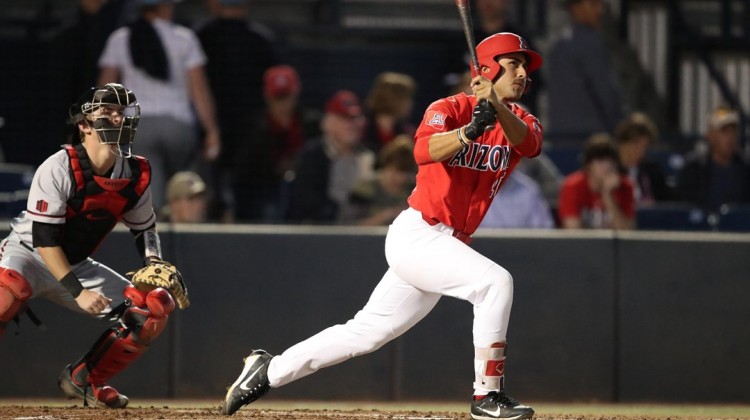 Here on Sports360AZ.com, Pac-12 at the Plate is the place to keep up with how ASU and Arizona baseball are stacking up in the conference. This week ASU hosts Oregon, while Arizona heads north to Washington in the first weekend of conference play. Here’s what you need to know ahead of the action this weekend:

The Sun Devils and the Wildcats met up for the first time this season in a non-conference midweek game at Phoenix Muni on Tuesday. Arizona extended their win streak to five with a 6-2 win.

For the Wildcats, clutch plays and timely hitting were the key. Sophomore outfielder Matt Frazier had a huge play at home and went 2 for 4 on the night. Nick Quintana extended his hitting streak to eight games, going 2 for 4 as well in Arizona’s win. Starting pitcher Avery Weems went 4.2 innings allowing two runs on five hits. Preston Price came in for 2.1 innings and held the Sun Devils’ to only three hits. Price got the win for the Wildcats.

💪 on em Matt Fraizer!
That throw to home….Mmmm

ASU freshman infielder Spencer Torkelson hit his ninth home run of the season on Tuesday night. The freshman is now only two home runs away from Barry Bonds’ freshman home run record of 11. Torkelson leads the nation in home runs by a freshman and is third in the nation amongst all collegiate players.

🔥THE FROSH IS STILL ON FIRE 🔥

Take another look at Spencer Torkelson's ninth home run that leads all freshman in the nation! pic.twitter.com/fh0uoFpFp2

The rivalry 2018 edition will continue in mid-May when Arizona hosts ASU at Hi-Corbett for the season series.

ASU still has plenty of room for growth with their young squad. The Sun Devils came out strong last Friday against North Carolina-Wilmington, but Saturday and Sunday things weren’t clicking and in Tuesday’s game against Arizona errors and fielding mistakes hurt ASU.

Head coach Tracy Smith said part of the Sun Devils’ struggle is not having the resiliency to finish strong.

“We’ve gotta have a tougher mindset to be able to overcome,” Smith said. “Bad plays are going to happen, but when you put four or five of those together in one inning, that’s pretty tough.”

Oregon sits at 12-4 coming into this weekend. The Ducks have solid pitching that will give the Sun Devils some trouble if things don’t start getting more consistent all around at the plate for ASU. Junior RHP Matt Mercer and sophomore RHP James Acuna will be the guys to watch for in this upcoming series.

Arizona’s bats have woken up in the last couple weeks, which is much needed for the Wildcats.

“We didn’t play to a template of winning baseball the way this team knows how to,” head coach Jay Johnson said of Arizona’s weekend struggle in Minnesota against Big 10 teams. “I think we redefined some things when we got back from that trip. They’ve committed to that and I think the results have followed that. This team can be successful, but they’re going to have to earn it.”

Last weekend in the sweep against North Dakota State big bats like Alfonso Rivas, Cameron Cannon, Ryan Haug, Cesar Salazar, Nick Quintana and Cal Stevenson all got hot. Cannon went 7 for 12 with a triple on the weekend.

Arizona’s pitching has been the most consistent this year. The Wildcats have the tenth best ERA in the country with a 2.29. The pitching staff has given up 43 runs in 15 games in 2018, the fewest in that span since 1974.

Cody Deason was on one tonight! He had a career high 9 strikeouts, and he gets his second victory of the year. #MLBTrainingGround pic.twitter.com/UIOl9bAXZV

Friday starter, junior Cody Deason is 45th in the country with a 1.03 ERA. He has allowed only four extra-base hits in his 26.1 innings. Sophomore lefty Randy Labut has hitters batting at .253 against him and holds a 2.08 ERA, he has had four starts and two relief appearances in 2018. Junior Michael Flynn has not lost a game in his career as a Wildcat. The righty has a 3.18 ERA in four appearances so far this year.

Washington sits towards the bottom of the Pac heading into conference play. The Huskies struggled in a four-game set against Illinois State last weekend, but will look to right the ship against an Arizona team that’s still settling in as well.

Oregon State head coach Pat Casey was suspended for four games last Friday after the bill of his cap reportedly touched an umpire while Casey was arguing a check-swing call. Casey has served two of those games, the other two will be served in this weekend’s series against Cal. The Beavers are now No. 1 in the NCAA with a 15-1 record, their only loss coming against Cal State Fullerton last Friday.

Golden Bears first baseman Andrew Vaughan was named Pac-12 Player of the Week last week going 5 for 13 with two home runs, a double and six RBIs. Vaughan has the ninth best batting average in the country at .472 and leads the country in home runs with 10. The Golden Bears have the eighth best team BA at .325. Cal has a 12-4 record coming into the weekend, sitting at No. 3 in the conference.

UCLA is No. 17 in the NCAA rankings. The Bruins dropped eight spots after losses against both No. 13 Vanderbilt and unranked USC in the Dodger Stadium College Baseball Classic last weekend. Keep an eye on senior pitcher Jake Bird this season. The righty has a .36 ERA in 25.1 innings, 13th best in the nation. He leads the Bruins, who have a team ERA of 2.03, third best in the country. At the plate, sophomore infielder Michael Toglia has a .431 batting average in 51 plate appearances.

Washington State has seen some early struggles. The Cougars are 4-8 heading into conference play.

Utah has a 1-14 record in 2018. In the last couple of years, the Utes have fared well in conference play, but this season things haven’t been going right at all for this team, so it will be interesting to see how they stack up as conference play gets started.

USC comes into this series with a 9-4 record. The Trojans will look to settle their pitching and get the bats going to get Pac-12 play off to a good start.

NFL Admits They Were Wrong on Racial Justice and Protesting - https://t.co/FRtVCOo963 via @sports360az
View on Twitter
1
6