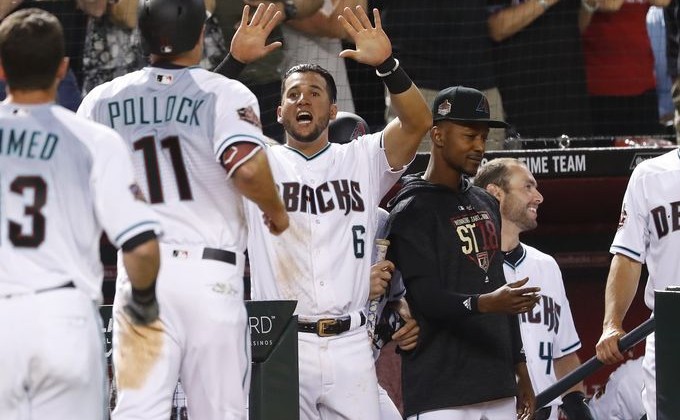 The Arizona Diamondbacks kicked off their 2018 campaign facing off against a division foe in the Colorado Rockies and won the series 2-1 behind two high-scoring wins in games 1 and 2.

Before we get to this season, let’s take a look back. Saturday was the 20th anniversary of the first Diamondbacks game in franchise history.

A trip down memory lane. A look back at the Opening Day ceremonies before the #Dbacks debut game. #GenerationDbacks pic.twitter.com/1CPfI6Hqjt

Ok, now to this year’s baseball.

Torey Lovullo said earlier this spring he thought the middle infield of Nick Ahmed at shortstop and Ketel Marte at second base would be a regular pairing throughout the year. With Ahmed’s ability to limit runs defensively, he would be an asset for the defense-focused Diamondbacks of 2018. He flashed the leather a little bit in the first three games, but his bat did a lot of talking too. This series, he went 4/11 with a home run, three runs scored and five RBIs, with the bulk of that damage coming in the back-and-forth win Friday night.

There were some questions about which Zack Greinke we would see in his first start of 2018. Some – including Greinke himself -worried about his velocity drop, and he slid back to the third spot in the rotation because he was overcoming a groin injury in spring training. He may have answered some of those questions in the series finale, pitching 5.2 innings, striking out nine and giving up just one run – a solo home run to Charlie Blackmon. He attacked hitters, starting off 16 of the 22 batters he faced with a strike and threw 59 strikes on 83 pitches total, which was encouraging to his manager:

Paul Goldschmidt found himself in a slump at the end of 2017, and it was later revealed he was battling through a wrist injury. While the wrist may have healed, it seems as though those struggles could have carried over to 2018. Through the first three games, Goldschmidt went 0/8.

Paul Goldschmidt lines to shortstop for the second out of the eighth. Dating back to last season, he's 0 for his past 25 with six walks and one hit by pitch.

The good news? He is still getting on base, drawing four walks and scoring two runs. When he is making contact, he is connecting. In his last at-bat on Saturday, he hit a ball on the screws but right at Trevor Story. The three-time Gold Glover also doesn’t seem to have any struggles defensively either.

In 2016, the Diamondbacks’ season unraveled before the season really could get going, and a big reason why was early, long-term injuries to outfielders David Peralta and A.J. Pollock. You saw what they could do on the field when they were (mostly) healthy last year, and they came out swinging (literally) in this opening series. They combined for 6/19 with six runs, three RBIs, three walks and a stolen base.

‘Berger In the Bullpen

The bullpen transformed itself from one of the worst in baseball in 2016 to one of the best the following year. Perhaps the biggest position battle heading into spring training was at the closer position, where Brad Boxberger eventually earned. The closer picked up his first save since October 1, 2015.

"Box'em up!" Brad Boxberger closes it out in his @Dbacks debut and it's a 2-0 start for the D-backs. pic.twitter.com/gGwBYjroJ7

Overall, the bullpen was called on early each game. Both Pat Corbin and Greinke didn’t make it six innings, Robbie Ray lasted five. Diamondback fans saw a plethora of bullpen arms this week and giving up just three runs is a solid start for a group that will be crucial to the Snakes’ success this year.

The Diamondbacks have Easter Sunday off before hosting the Los Angeles Dodgers in a three-game series. Taijuan Walker, Zack Godley and Pat Corbin are slated to start that series.